New Orleans Is Still A Mess 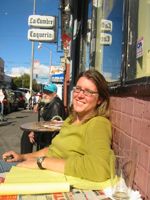 Susan King says she just got back from a battle. She doesn’t have any scars to show, and I don’t think she even owns any weapons. But she did come back from New Orleans with some stories. Perhaps more importantly, she came back with information.

“It is Jim Crow 2005 with the things that are being required of the Ninth Ward,” said King, who recently spent five days doing relief work with the Common Ground Collective, a group that formed in the wake of Hurricane Katrina. According to King, residents of the poverty-stricken Ninth Ward are still not allowed to enter the area in order to retrieve their belongings, while other parishes have been opened for some time. This Thursday, according to Reuters, is the first time that many residents will be allowed via tour bus to return to their neighborhood.

“There are definitely two New Orleans,” said King confidently. And that’s where the Common Ground Collective fits into the picture. The organization has focused on supporting the Ninth Ward since the hurricane ripped it apart. It runs on a staff of about 80 people, 30 of whom are medical experts, the rest of whom work on rebuilding and cleaning the Ninth Ward.

During her stay with the Collective, King helped in the distribution center, unpacking boxes of donations to be put in the makeshift supermarket constructed by the Collective. In addition, she helped at the Clinic and also assisted in cleaning an entire street of debris. She emphasized the importance of revitalizing the areas where residents once fostered community, such as churches, schools, and parks.

“When you loose the poor people you loose a lot of your culture,” said King, who also thinks that Hurricane Katrina put a “face on the underclass of America,” which she says has been neglected for years. According to King, many of the people who sought help in the Collective’s free clinic had not had access to health care in a long time. She cited the case of people coming to the clinic with no idea that they had serious health risks, such as diabetes as an example of how bad it is.

“The long-standing neglect of the community has been really highlighted. The flood just brought it to the surface,” she said. Despite the chaotic situation that King witnessed, she still has hope as she sees the Collective grow. “And there’s plenty of people who are outraged,” she said. “The work has become so effective, at some point, we will be a force to be reckoned with.”

“We must show the world, the nation, and the people of New Orleans that they’re not being forgotten. The purpose of the effort is to give hope to the Ninth Ward that the people can return,” said King, who also emphasized the fact that many of the Ninth Ward residents have roots that go back many generations in the neighborhood.

The Common Ground Collective is planning a massive volunteer effort November 20-27. It is encouraging people from around the nation to find their way to New Orleans with skills and supplies. “We can use anybody who has a skill,” said King.

King emphasized the fact that those who are unable to travel to New Orleans can always do something from home. “This is a tangible thing that everybody can do.”

For more information about the Common Ground Collective, visit their web site at www.commongroundrelief.org.