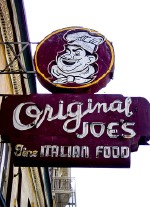 The new Original Joe’s opened this week, immediately becoming a “must go” destination for those seeking old school Italian dining and quality food at remarkably low prices. Elena Duggan and John Duggan, Jr., whose grandparents opened Original Joe’s on Taylor Street in the Tenderloin in 1937, have accomplished something very special in their new North Beach location: they have created an open, well-lit beautifully designed 2012 looking restaurant with a menu that includes all of the greatest hits that long made Original Joe’s a San Francisco icon. This means Joe’s legendary ¾ pound hamburger and fries is back (for only $11.50!), along with the unsurpassed selection of pasta dishes. The restaurant has an entire wall of articles and photos (including Time Magazine’s top recommendation of O Joe’s for visitors to the 1984 Democratic Convention), adding to the feeling that this is a very special place in San Francisco history.

After all the conversations I have had with John Duggan, Jr. about his plans to reopen Original Joe’s, it was great for me to attend the restaurant’s opening this week to witness the fruition of his efforts. The new Original Joe’s surpasses all expectations, and, as owner Marie Duggan (Joe’s mom) told me, it even includes the bar stools and ceiling wood slats from the original restaurant.

I think many will look at the new menu and think there must be some mistake, as the prices look like those of the 1980’s. But Original Joe’s has always been a place that people of all incomes can afford, and the Duggan family remains committed to that vision.

Original Joe’s fills a critical niche in both the North Beach and San Francisco dining scene. It is one of the few traditional Italian dining spots left in the city, and while I love restaurants like Delfina as much as anyone, there needs to be restaurants like Original Joe’s that serve linguini and clams, spaghetti and meat balls, and hot roast beef sandwiches the old school way.

Located at 601 Union Street across from Washington Square Park, Original Joe’s offers a huge bar with views of the park and televisions for sports fans. It should be regularly packed come the start of baseball season.

Mayor Lee is smart enough never to miss a restaurant opening (he had a great photo op sampling New Orleans food at Brenda’s earlier in the week), and was a huge fan of Original Joe’s on Taylor Street. He will likely be a regular at the new location, and after a few words to the media the mayor happily joined Supervisor Mark Farrell in sampling the new cuisine.

Lee noted that Original Joe’s has created eighty new jobs, allowing the mayor to again promote the economic development activities that are the hallmark of his Administration.

I am sure I speak for many in having fond memories eating at Original Joe’s starting in the 1980’s. One got so full that no snack was needed for those long post-lunch afternoons. The new spot looks a lot more comfortable, and still has those leather booths that we all so fondly recall.

So check out Original Joe’s and either before or after eating be sure to look at the wall of memorabilia. 49er hero Joe Montana loved Original Joe’s, and you will see photos of him as well as other Original Joe’s fans from the restaurant’s opening in 1937 through today.

Original Joe’s is open from 10:30 until late in the evening, serving breakfast, lunch and dinner. Thanks again to the Duggan family for restoring a San Francisco treasure.