New Musical has Whoop, but no Dee-Doo at the New Conservatory 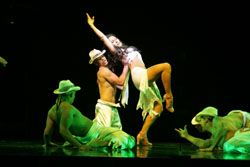 Some may say that Whoop-Dee-Doo is a musical like no other– and it is. However, that does not mean that it lives up to its hype of being hilarious. The Howard Crab designed costumes are at times on par with what you see in Beach Blanket Babylon. In fact, you could say that this show is the poor mans BBB. Talk about beating a concept to death – this show takes it further than anything you are likely to see. They not only beat it to death – but they stomp the fun out of it.

There are jokes, but they fall flat. The lyrics are set to familiar sounding tunes are at times somewhat clever – but not enough to get a guffaw. “Stuck on you” – sung by a trio of six foot-flies that have an attachment to flypaper is a good example. There is another skit called “Nancy: The unauthorized musical” about the Orange Haired 40th U.S. Prez. It lost its potential.

Judy Garland is dragged out literally in a lame skit that never really takes off. The name “Whoop-Dee-Doo holds out such hope and I was in the mood for some really funny satire about a bunch of amateurs who want to put on a show. But, I’m afraid we didn’t get Mickey and Judy. This group unfortunately stayed in the amateur mode in the long-long show. It was time to contemplate your navel. Part of the problem is that they are trying to hard. Nothing is subtle. They hit you over the head with it. Think Kinsey Sicks – and you will get the idea. Actually Whoop makes the “Sicks” look like Grand Opera. My favorite thing about shows like this is that they poke fun at many things. This group of actors tried to do what they could with the material, but the material has no legs.

You may want to “Whoop” in spite of what I have said. But you won’t find any Dee-Doo.

RATING: TWO GLASSES OF CHAMPAGNE!! AT THE NEW CONSERVATORY THEATER.

MAMBO KINGS is open at the Golden Gate Theater. The new musical is headed for Broadway and there are indications that unlike “Lennon” which failed to make it all the way – “Kings” probably has the right formula. It could be another “Mama Mia” that became such a huge hit in the Best of Broadway lineup. Here is the Buzz: The first act may have some problems. Some Celebs think that it is too disjointed even though it has a huge opening number with all the glitz and glamour that you would expect in something called “Mambo Kings”. Doesn’t it just conjure up images of hot Latin dancers and Palm Trees?
Here is a surprise. David Alan Grier sings. There is a problem with this kind of music. It tends to all sound alike. So to keep your interest it will require some vigorous and unique dancing and sets. Celebs have reported that in fact, that is what you get.

In the second act Desi Arnez (played by an actor) discovers some talent at a dance contest. A highlight song in this act is “Alone in the Dark” – and the buzz is that it is terrific. The interesting set is two levels with the band on the upper level with a catwalk in front. Tons of Neon will dazzle you – as the Mambo beat continues over two hours. This is just Buzz. My review will be in the next issue. The picture tells you pretty much what you will see.

The musical “Crowns” is coming to San Francisco soon from it’s sold out opening run at TheatreWorks in Palo Alto. It is scheduled for a July opening at the Marines Theater. The musical certainly has lots of energy. The real star of this show is the hats (Crowns.). If nothing else the enthusiasm of the cast will carry you along. But before that Kate Mulgrew is on the stage in “Tea at Five” the Marines in a homage to Kathryn Hepburn. Celebs say that she is just better than 47 flavors of Ice Cream.

Here are more interesting things to keep you busy: The New Conservatory closes the Pride Season with Patrick Wilde’s coming of age play “What’s wrong with Angry.” Young guy falls in love with the schools dreamboat – and who hasn’t done that? He is comfortable with being gay – but others, of course are not comfortable with that. Also, you can make it a “Tony” evening at the New Conservatory by attending their 2nd annual “Ticket to the Tony’s”. It’s a Gala benefit for the Theater with food, drink and lots of fun dishing the Tony Winners on big screen Theater. Who knows – you might meet someone and become a winner yourself. You know, his name could be Tony.

FREE – FREE—FREE: This Sunday its Opera in Yerba Buena Gardens (behind the Metreon). The San Francisco Opera is kicking off the upcoming “Gamble of Love” summer opera series that opens in June. The concert includes favorite opera arias and selections from the season’s productions. This is a “swell” way to spend the day on the grass. Have a picnic and enjoy this wonderful outing. Opera in the Gardens is made possible, in part by a gift form Music Performances Fund: Enriching Lives through Music in association with the American Federation of Musicians Local #6. See you there – and keep those Ruby Slippers under the blanket. You never know when a witch will descend. Of course, I Jest.