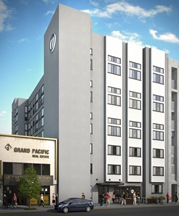 In July, a dynamic new San Francisco building opens with lofts, city views, a rooftop movie theater and barbecue pit, and a ground-floor café—and it is in the Tenderloin. After a long development process at the former site of KGO television studios, the Lofts at Seven is preparing for occupancy. It joins the recently opened Philz Coffee at Larkin and the renovation of the historic YMCA at Leavenworth in the revival of Golden Gate Avenue, whose steep decline in the 1990’s negatively impacted the entire neighborhood. The Lofts at Seven revives the Tenderloin’s historic legacy both by referencing the KGO-7 building and by its cutting-edge architecture, which reflects the area’s unifying of style and grit. The project is one of many that are helping to redefine the Tenderloin as a happening place.

I remember when KGO-TV donated its former studios at 277 Golden Gate Avenue to Hastings Law School. Hastings thought it had been given a golden gift before realizing that the structure was unsuitable for classroom use. After Hastings sold the building it sat vacant for years despite approved plans for housing.

The site remained inactive even after it was purchased by the current owners, the Dolmen Property Group (which will soon begin the renovation of its Hibernia Bank). After preparing to convert the office building to housing, Dolmen realized it would have to carry out an expensive and lengthy brick by brick demolition.

Fortunately, this changed strategy resulted in the best possible project. The Lofts at Seven is unlike anything previously built in the area and should prove a model for future Tenderloin housing developments.

The Lofts is also the second new project to move the Tenderloin forward by reviving the legacy of a past business at its site. David Nale will soon open his Bulldog Baths at 132 Turk on the site of the neighborhood’s historic Bulldog Bathhouse, with the new facility washing and caring for dogs, not men.

The Lofts at Seven and Bulldog Baths are among the projects in the pipeline that will improve public perceptions of the Tenderloin.

The Lofts at Seven will do more than provide top quality housing and revitalize a long dormant area—it will also enhance neighborhood safety. The Golden Gate and Hyde area was very safe in the 1980’s. But as buildings were demolished (including the very popular Knights restaurant between Hyde and Larkin), vacated (the KGO building), switched to uses undermining safety (the 101 Hyde Post Office) and ignored by uncaring owners (the Local 87-owned parking lot disgrace at Turk and Hyde), the scene changed for the worse.

Now the area is changing back. The post office is on track to be demolished and replaced by a mixed-use housing/retail project. Philz has brought positive evening activities to the area, and the café at the Lofts at Seven will remain open until 11pm. A restaurant is planned a few doors down from Philz, and Elmira Rosticerria, a very exciting addition to the neighborhood, has just opened around the corner at 154 McAllister.

Marc Passetti, the owner of Elmira Rosticerria, has opened this Tenderloin business after cooking at the Fairmont. Many see that as a step up, and the SF Weekly just gave Passetti’s restaurant a rave review.

More people in the area for the right reasons cause wrongdoers to relocate. Golden Gate and Hyde will be a much improved area when the Lofts at Seven opens in July.

This is the first loft project in the greater North of Market area, and to my knowledge one of the view buildings where you can watch movies and enjoy a fire pit on the roof. These units will be rented fast, so those interested should get their applications in now.

For more information about this project, see www.TheLoftsatSevenSF.com.

Randy Shaw is Editor of Beyond Chron. He still misses the painted Eskimo ice cream ad on one of the Golden Gate Ave. buildings demolished by Hastings in 1989.