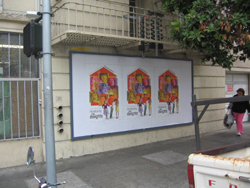 There is something amiss when a business can openly violate city laws with impunity. Or, as appears to be the case with the hundreds of illegal billboards attached to the sides of San Francisco buildings, where the cost of the penalty is less than the value of the illegal advertisement.

How else to explain the continued presence of illegal billboards four months after a formal complaint was lodged with the Planning Department, and action to enforce the complaint was initiated by said agency? The value of the illegal advertising clearly exceeds the penalty.

San Francisco voters overwhelmingly approved a new billboard ban. If financial penalties are not fulfilling the voters’ will, than the city must get the power to simply remove the offending billboards.

The Department of Public Works regularly removes illegally posted signs from light poles and other public spaces, and there is no reason that these crews cannot remove illegal billboards from private property. We are unlikely to see property rights advocates insisting on the “right” to post illegal billboards on their buildings.

DPW’s involvement would not only quickly solve the problem, but would free up Planning Department staff to work on other pressing needs.