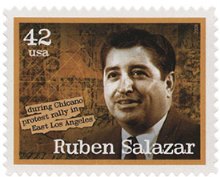 If you grew up in Los Angeles in the 1960s, or followed Chicano politics of the era, you knew how much Ruben Salazar contributed to the movement. And many believe that’s why the Los Angeles Sheriff’s Department killed him.

Ruben Salazar: Man in the Middle will be shown on PBS on April 29. I saw an advance copy and it reminded me of how most Americans know all about racist Southern law enforcement beating up African-Americans but how few know the racist history of the Los Angeles police and sheriff’s departments toward Latinos.

When Ruben Salazar was killed by the LA Sheriff’s Department on April 29, 1970—and the controversy is not over whether they killed him, but rather whether they did so intentionally—a television show was on named Adam 12. Like the earlier Dragnet, Adam 12 showed the Los Angeles police to be wonderful and caring people. The show was on from 1968-1975 and you never saw police beat a Chicano for violating no law, or in any way manifesting the racist treatment of brown and black residents that the actual police force was demonstrating on a daily basis.

If you do not know this history, don’t miss this documentary.

There is a scene of systemic police violence against a mass Chicano protest in 1970 that was replicated in Echo Park only a few years ago. The LAPD is not anywhere near as bad as it was in 1970, but the conditions portrayed in the film continued for decades.

Prior to seeing the film, I always thought Salazar was a radical journalist. But he was not even a progressive until the late 1960’s, and for all of his pride in being Chicano he married a white wife and lived in an all-white neighborhood.

Ruben Salazar was a complex man with a sophisticated understanding of racial justice in the United States. It is well past time for his story to be brought to film.

Randy Shaw is Editor of Beyond Chron. He writes about Chicano politics of the Salazar era in Beyond the Fields: Cesar Chavez, the UFW, and the Struggle for Justice in the 21st Century