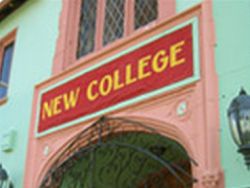 New College of California, once one of San Francisco’s preeminent training grounds for progressive activists and attorneys, has lost its battle for survival. While New College’s demise has been anticipated since last Fall, a shred of hope remained that something could be done to save this venerable institution. But now New College is gone. Its loss is not only a tragedy for the city’s progressive community, but for everyone concerned about creating an educational, social, and cultural infrastructure for those seeking to pursue alternative careers. While the media has covered the financial problems that brought down the school, a critical question has been ignored: why did state and federal regulatory bodies facilitate New College’s death, instead of intervening to create a work-out plan that would have allowed it to survive? Poor administration clearly brought down the school, but a more sympathetic political administration in Washington D.C. could have kept it alive.

I have not written about the impending death of New College because of my hope that founder Peter Gabel would somehow find a way to get the federal Department of Education to agree to a workout plan. The Bush Administration had no difficulty creating a billion-dollar bailout for Bear Stearns, but clearly has a much different standard when it comes to saving progressive institutions.

Gabel is a true visionary. And New College’s death, amidst the understandably angry recriminations by faculty missing paychecks and students forced to find new schools, is a real tragedy.

New College reflected Gabel’s belief that 1960’s activists should create alternative institutions that fostered progressive change. New College School of Law accepted many non-traditional students, and turned out hundreds if not thousands of progressive attorneys who served the people, not corporate interests.

New College had a graduate psychology program that was also an alternative to traditional educational approaches. And its undergraduate program represented a progressive bastion amidst an increasingly corporatized public university system.

When the Roxie Theater faced closure, New College stepped in to save this cultural resource. The same was true for the nearby Modern Times bookstore, which has survived for years through its book sales for New College classes.

As a private school, New College was always dependent on students obtaining federal loans and grants. This reflected the brilliance of Gabel’s strategy, which was to leverage federal student aid money to build a progressive institution whose social orientation promoted social change.

When progressive institutions were battered during the Reagan years, Gabel steered New College through the hostile environment. The school expanded after the current President Bush took office, and even acquired a residential hotel for use as a student dorm.

Had Peter Gabel dedicated his life to making money rather than progressive change, he would likely be among the many Silicon Valley multi-millionaires living in a Peninsula mansion. But he chose a different course, and thousands of people and the city of San Francisco benefited from his vision for New College.

Until recent problems became public, New College appeared to be doing better than ever. But when longstanding administrative problems re-emerged a few years ago, the school confronted a federal education department that saw its chance to bring New College down.

Like many visionaries, Peter Gabel was not strong on administration. New College often had financial and management problems, some of which are typical for large, multi-functioned institutions and others simply reflecting staff not doing a good job.

Since New College’s entire financial structure was based on federal student loans, it was essential that the school remain accredited for students to qualify for such funds. Various accreditation issues had arisen throughout New College’s history, and Gabel had always been able to work the problems out.

But the George W. Bush Administration cared little about working with Gabel to address outstanding issues. To the contrary, federal education officials likely saw the school’s problems as an opportunity to close down the notorious breeding ground for progressive activists.

Unfortunately, New College gave its adversaries all the rope they needed. And when faculty paychecks were delayed, and students faced the loss of their grants, the school alienated the chief potential opposition forces to the federal government preventing loans to the school.

One conclusion easily drawn from Internet comments and articles about the school’s problems is that the faculty and staff, who were obviously progressive and committed to the New College vision, felt deeply betrayed by the school’s administration. This betrayal went beyond the missing paychecks to charges that New College was not being run in accordance with its principles.

Betrayals by alleged allies are far more bitter than when one is turned upon by an adversary. And in the view of many of the faculty and students impacted by New School’s administrative failures, the school was a hypocritical institution that deserved the entire blame for its demise.

Yet in the case of Bear Stearns, or countless other corporate institutions, the federal government intervenes to protect them from the wrongs committed by individual administrators/managers. This often involves the forced removal of top corporate officers as a condition of assistance.

New College did not get this opportunity. Nor did it get any other chance to save itself. The government could have put the school under its control pending the installations a new management team, and/or could have appointed a longterm receiver. But it did nothing to help the school return to viability, clearly preferring to see its demise.

New College did not have to die. Its loss weakens the city’s progressive infrastructure.
Yet no major public fight was waged for its survival, and only tears and bitterness have been left in its wake.