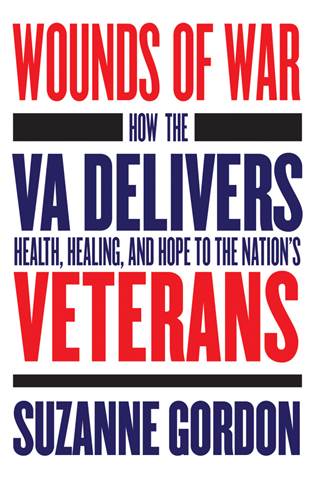 As a Vietnam veteran who served in the Marines between 1968 and 1972, I am all too familiar with the wounds of war Suzanne Gordon describes in her excellent new book.  Like so many people who served in Vietnam, I live with PTSD, health issues from Agent Orange exposure, the skeletal wear and tear from lugging heavy packs in the jungle for 18 months, and hearing loss—much luckier than many, unluckier than some.

I know how hard it was to get Congress and the VA to recognize these—and other—wounds of war.  Thanks to veterans’ efforts over many decades, veterans have benefited from what the Veterans Health Administration (VHA) has done to address them.

That’s why this book is both important and timely.  Wounds of War: How the VA Delivers Health, Healing, and Hope to the Nation’s Veterans tells the story of one healthcare journalist’s journey through our nation’s largest, and perhaps most misunderstood—mischaracterized, actually—healthcare system.

Gordon, who has written extensively about the mess created by our country’s medical industries, spent five years investigating the VHA.  She listened—not to the avalanche of negativity from the nation’s right wing and even mainstream media—but to veterans who talk about the illnesses and injuries that were acquired or exacerbated by military service. Those problems, she reminds us, do not only afflict combat veterans.

Some of the veterans we meet in her book have never left the United States but are suffering with chronic pain and PTSD. Even non-deployed veterans may have been exposed to toxic chemicals, concussion producing explosives, and brutal training regimens—or even just brutal superiors.

Anyone familiar with the specific problems of the veteran population would not be surprised to discover that we can be a cranky bunch, suspicious of government, and ready to pounce when we feel slighted. We are also, as she shows, deeply vulnerable.  We recognize and appreciate the help that is proffered once we get past our anger and suspicions.

To show us how the VA provides this help, Gordon has accompanied veterans as they go to primary care appointments, take counsel with mental health practitioners, attend classes to deal with chronic pain, learn how to cook healthy meals, recover from traumatic brain or spinal cord injuries, convalesce from strokes, cope with vision loss at the VA’s numerous Blind Rehabilitation Centers, and numerous other programs that comprise the VA’s comprehensive healthcare system.

The VA also has many programs to help alleviate and eliminate homelessness among veterans, and supports justice programs for veterans with legal problems.  As a long-time board member of the San Francisco based Swords to Plowshares Veterans Rights Organization, I am particularly glad that Gordon took the time to investigate how the VA engages in public-private partnerships with groups like Swords.  Unlike predatory public-private partnerships—where private companies profit by raiding the public till – these partnerships with local non-profits (run for, and often by, veterans) actually pursue a common good.   Gordon documents their successful efforts to reduce veteran homelessness and keep veterans out of jail.

Two of the chapters I found most interesting were those on veteran suicide and end of life care.

We have all read the headlines about the VA’s failure to stem the epidemic of veteran suicide. The media and Congress routinely blame the VA for problems that should be placed squarely on the shoulders of the Pentagon, Congress, various Administrations, war profiteers, and that segment of the public that supports America’s wars.

The VA is making a heroic effort to stem the flow of death – currently far higher than the butcher’s bill for our six on-going wars.  The VHA has many thousands of social workers, therapists, psychologists, psychiatrists, and other staff specially trained to find and help disturbed veterans who are in danger of hurting themselves or others.  Of the estimated 20 veterans who successfully kill themselves each and every day (more than 7,300 per year) only 6 of them have had contact with the VHA in the last two years.

In her chapter on suicide prevention, Gordon takes us to Canandaigua, in upstate New York, where she visits the national Veterans Crisis Line (VCL).  VCL staff, we learn, responds to calls not only from veterans, but active duty service members and any person contemplating suicide who, by mistake, hits 1—the number reserved for veterans—when they dial a suicide crisis line. I was humbled by the psychological burden on the hotline staff who talk down suicidal veterans who are locked and loaded and who are threatening to do in themselves and sometimes family members.

In another very moving chapter, Gordon visits hospital wards, and nursing homes where we meet veterans who are confronting their last days of life. Gordon describes the kind of palliative and hospice care the VHA provides.  This makes the VHA a model for a broader healthcare system that often tries to prolong life no matter what the harm to the patient.

Throughout this book we see how the most comprehensive healthcare system in the US works—not always perfectly, certainly—but damned well.  It’s honestly a surprise how well it works given the hostility it faces from politicians and corporate interests who want it reduced to a TRICARE-style insurance payer.

Gordon shows what veterans would lose if the VHA were to be privatized by contrasting its outcomes with those in a private sector, which prioritizes profits and minimizes transparency and accountability.  By stark contrast, the VA is accountable by law to Congress and the public, which is why we are always reading about its problems.

Gordon argues that we veterans must fight to reverse the VA MISSION Act of 2018, concocted by the Koch brothers funded Concerned Veterans for America, served up by a supine Congress and gleefully signed by President Trump. The major veterans’ service organizations (my own beloved American Legion, as well as more than 30 others) have been conned (or worse) by its very few good points and supported its passage.  It is largely a bad law that will inevitably degrade the comprehensive care that the VHA provides 9 million veterans while it siphons off money to a private non-system that will charge much more while delivering far less.  Ensuring that the VA is able to fight off slow strangulation leading to privatization will be our major task over the next year as the regulations for the VA MISSION Act are devised and implemented.

It is clear that veterans and non-veterans alike should heed the call in Gordon’s book and join to fight against privatization of the nation’s only truly integrated healthcare system.

Suzanne Gordon will be speaking about her book on Wednesday October 17th, from 6-8pm at a book launch party at the Veterans Building, 401 Van Ness Avenue, San Francisco.

Paul Cox is a civil engineer and inveterate veteran.  He is chair of the American Legion War Memorial Commission in San Francisco, a board member of Swords to Plowshares Veterans Rights Organization, and a founder of the SF Chapter 69 of Veterans for Peace.  He also on the Executive Committee of Veterans Healthcare Policy Institute.   He lives in Berkeley with his wonderful wife Margo Schueler and no cats, no dogs, and no chickens.