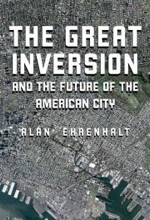 For San Franciscans, it’s hardly news that more affluent people are moving to the city while those seeking more affordable housing move to nearby cities and suburbs. The city has higher-cost housing in SOMA, downtown, and Mission Bay, core central city areas that two decades ago either lacked many residents or housed a less upscale demographic. Alan Ehrenhalt, the longtime Executive Editor of Governing magazine, sees a nationwide shift in central city populations, as more affluent people come in and the less well off move to the suburbs and outlying city neighborhoods. His new book, The Great Inversion and the Future of the American City, explores this and other points about where urban America is today, and what its future holds.

The story of urban America in the post WWII era begins with a middle-class flight to the suburbs in the 1950’s, 1960’s, and 1970’s, and the gradual return of young urban professionals (the infamous “yuppies”) as the 1970’s came to a close. Since the 1980’s, many of the nation’s leading cities – New York City, Boston, Chicago, Washington DC, San Francisco and to a lesser extent Los Angeles – have seen central neighborhoods adjacent to business districts flourish while the poor and newly arrived immigrants either relocate to outlying areas or leave the city entirely.

Alan Ehrenhalt describes the causes of this trend, which he describes as “the great inversion.” He points out that the great European cities long had the affluent living in the central city neighborhoods, while the poor and working class lived on the outskirts. He notes that affluent people seek short commutes, walkable neighborhoods, and the type of Jane Jacobs sense of community more likely to be found in central city communities than in the suburbs.

Ehrenhalt’s analysis has been criticized by demographers as lacking a factual basis –
census numbers show the actual numbers of affluent people moving to central districts remains quite small, while the numbers in the suburbs remain high – but he takes great pains to acknowledge this. His point is that the raw number of new affluent residents is less important than their increased presence in central city districts, which he believes is an ongoing and irreversible trend.

It’s possible that Ehrenhalt could have diffused criticism had he relied on a more systematic and focused approach in proving his case. In other words, take a place like New York City and its suburbs and examine in detail how demographic trends confirm his thesis. Or choose a few cities to investigate. But perhaps feeling that he needed examples from many places to prove his point, Ehrenhalt provides a more cursory examination of several cities and neighborhoods from across the country (though none in California).

I found his analysis worked best when I had visited the neighborhood in question, as was the case with Lower Manhattan and Bushwick in New York City and Chicago’s Logan Square. The same proved true for his discussion of Philadelphia, which I know less well but have visited multiple times. In these examples, I could add my own knowledge to the book’s arguments to confirm or reject the author’s claims.

But not being familiar with Cleveland Heights in Gwinnett County, Ohio or parts of Houston and Atlanta, Ehrenhalt’s less than in-depth background discussion left these neighborhoods connection to the book’s thesis unclear. That’s the risk of trying to prove an analysis by using a broad brush to cover vastly different geographic locales; one can spread the material too thin for readers to get a clear sense of the places discussed, or the message to be gleaned.

Despite the slowness of the demographic trends underlying “the great inversion,” Ehrenhalt’s argument appears incontrovertible. And while he focuses on the factors making central city life more attractive to the affluent, the book indirectly offers a troubling prognosis for the quality of life in outlying areas and non-affluent suburbs.

These are the communities whose lack of public transportation increases residents’ vulnerability to rising gasoline prices, and which are also increasingly dependent on Wal-Mart and other big box stores. Suburban housing is deteriorating as central city buildings once did, and the stock of foreclosed and vacant homes may be around for some time.

As people of lower-incomes inhabit the suburbs, the political clout of such areas will decline. This will bring a further reduction of public services and the decline in the neighborhood’s quality of life.

I’ve never felt sorry for residents of suburbs, but the trends Ehrenhalt chronicles do not bode well for these once iconic communities. He might even consider a follow-up book in a few years detailing the great inversion’s negative impact on Suburban America.

Randy Shaw is Editor of Beyond Chron and author of The Activist’s Handbook and Beyond the Fields: Cesar Chavez, the UFW and the Struggle for Justice in the 21st Century.