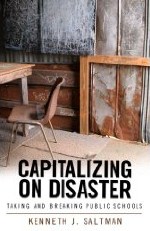 Charter schools. The destruction of New Orleans. The Asian tsunami. Gentification. No Child Left Behind (NCLB). Race to the Top (RttT). The invasion and occupation of Iraq. What do these all have in common? For Kenneth Saltman, they are each illustrations of the latest phase of the neoliberal assault on the hard won gains of people to expand the role of government to ensuring public education, housing and public ownership over natural resources among other vital social services.

Saltman’s new book Capitalizing on Disaster, inspired by both Naomi Klein’s recent book Shock Doctrine (2007) and David Harvey’s A Brief History of Neoliberalism (2005), explores these interconnections in the struggle over public education and should give pause to those wondering what Secretary of Education Arne Duncan’s “Race to the Top” project is all about.

For Saltman, natural catastrophes, acts of war and education policies can each provide a context to “set up public schools to be dismantled and made into investment opportunities.” Saltman’s account of Duncan’s neoliberal attacks on public education “CEO” of the Chicago Public Schools should be a warning to those of us working in public education.

Meticulously documented, the central focus of Saltman’s relatively short book is on the privatization of Chicago’s public schools under Duncan’s leadership. As a professor at DePaul University in Chicago, Saltman has a personal stake in what is happening in that city. Saltman documents how the business sector’s Renaissance 2010 plan was picked up by the local school districts and city elites in order to dually pave the way for gentrification and backdoor privatization of public education.

Historical disinvestment in public housing and public education have become a perfect storm setting them up for failure under the onerous mandate of NCLB. Saltman describes in detail how schools located in areas with prime real estate are unilaterally declared “failures” and privatized by stripping local community control over the schools, smashing teachers and staff unions, shutting the schools down, and setting up new schools run by for profit and non-profit charter corporations.

For Saltman, this “smash and grab” is hardly restricted to the US. He details the rise and emergence of a little known defense contractor Creative Associates International, Incorporated. CAII has figured prominently in US foreign policy projects having received contracts to train demobilized Contras, prop up the Haiti coup government, and more recently to privatize Iraq’s public education system.

Interestingly, CAII received its Iraq contract months before the US invasion occurred thus raising new doubts about the claim that the US did not plan for the occupation. Saltman neglects to describe how Iraqi students and teachers may have responded ultimately resulting in CAII failing in Iraq and losing its contract. Nevertheless, Saltman’s analysis of the US neoliberal model being applied to education is the first to go beyond the focus on Iraq’s oil and agriculture sectors, both of which have gotten nearly all the attention.

By doing so, Saltman convincingly confirms Harvey’s premise that neoliberalism is also a cultural, as well as economic, project. As a cultural project, it seeks to capture and reform education, media, and other ideological institutions in order to shift public beliefs, norms and values so that the hegemony of the market over every aspect of life is ultimately seen as commonplace and even unquestioned.

Ironically, the latest issue of my union’s magazine American Educator (published by the American Federation of Teachers) arrived while I was reading Saltman’s book. To my surprise, it featured a prominently placed article written by Secretary Duncan demonstrating just how embedded the neoliberal cultural has become reaching deep into the depths of the very theoretical foundations of my own union many of whose members are under threat from privatization promulgated by NCLB and RttT.

After 30 years of vicious assaults, neoliberalism has made much less inroads into public education because it has been defended so adamantly by students, faculty, staff and families from across the political spectrum. This struggle, Saltman insists, must mean that “public education remains a crucial ‘site and stake’ of struggle for critical forms of public democracy” from below.

Now if only we can get my union to join the fight.

Robert Ovetz, Ph.D. is an adjunct professor at two California Bay Area community colleges. He can be reached at rfovetz[at]riseup[dot]net. He is one of the statewide March 4th Day of Action/Strike organizers against budget cuts and neoliberal attacks at these colleges.