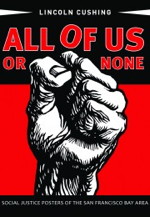 During the activist struggles of the 1960’s, political posters promoting social justice came of age. Posters that combined ideological messages with great art work were commonly stapled or taped to poles or coffee shop walls, and their immediacy worked against the idea that they should be preserved for history as iconic treasures of the time. Fortunately, Berkeley activist Michael Rossman recognized the historic value of these posters and dedicated much of his life to preserving them. And even more fortunately, these posters are now available to be seen and discussed in a new book by Lincoln Cushing, All of Us or None. Many are also displayed at a show curated by Cushing that opened on March 30 at the Oakland Museum. This exhibit also includes a demonstration of the poster-making process. The book and the show reveal the rich history of Bay Area political posters from the 1960’s through today, and deserve the widest possible audience.

I had long heard about Mike Rossman’s legendary political poster collection, but until reading Lincoln Cushing’s new book I did not realize how Rossman acquired what became a collection of twenty four thousand distinct titles. It turns out he got them by taking them directly off polls or from store windows, always careful to wait until the date of the promoted event had passed.

Rossman was like those who stop their car at every garage sale. Except his target were political posters, and his goal was to “document in detail the history and textures of progressive activism.”

He clearly succeeded. And central to his ultimate success was entrusting stewardship of his collection to Lincoln Cushing, a Bay Area poster maker whose book on stunning book on American labor posters, Agitate! Educate! Organize! American Labor Posters, (co-authored by Timothy Drescher) was reviewed in our pages in May 2009.

Cushing may well be the nation’s preeminent scholar on post 1965 political posters, and when added to his own experience as a poster maker it is not surprising that his new book brings out the deepest meanings in Rossman’s collection. Cushing also curated the newly opened Oakland Museum show. I know some San Franciscans rarely if ever go to the Oakland Museum, but in addition to Rossman’s posters there is also a thought-provoking exhibit on the events and cultural happenings of 1968. I strongly urge those interested in progressive politics to attend these shows, and if you have kids over nine years of age you should definitely bring them – they will love it.

The Legacy of Political Posters

In his book, Cushing notes that the graphic artists that helped launch political posters in the United States in the 1960’s had two key influences. The first came from Cuba’s “Golden Age” from 1966-1972, and the second was street posters created by art school students during the 1968 general strike in Paris (the Oakland exhibit has a video of the hanging of posters in the latter). Poster workshops emerged in various U.S. cities as well.

Many critics even today question viewing posters as quality art, seeing their messaging as “propaganda” and their mass production as contrary to the art world’s focus on the unique work. But Cushing notes that the silk screen art of the 1930’s Federal Art Project created the first art that many Americans owned, and that the entire notion of multiple original works of art is more consistent with the democratic process. Many readers are likely aware of the many political posters produced by the United States government around our first two world wars; Rossman’s collection excludes work by government agencies and is limited to work produced by “independent” agents of change.

I most appreciated Cushing’s book and the Oakland Museum show for its bringing past memories of campaigns and issues that are less known if not forgotten today. For example, there is a 1953 poster supporting the National Negro Labor Council’s demand to “Democratize Yellow Cab.” The poster urges people to call or write the Tenderloin-based Yellow Cab and say “We Won’t Ride if Negroes Can’t Drive.” The picture is a great work of art independent of its powerful message, and reminds us that the demand to end racial discrimination in employment did not begin in the 1960’s.

There are a number of early women’s movement posters that show just how radical that supposedly “white middle-class” struggle actually was. These were days where struggles for women’s access to healthcare, childcare, and the push for lesbian rights took on a far less “mainstream” tone. It was also an era when a poster promoting “An Evening of Women’s Music” with Chris Williamson, Margie Adam, Meg Christian, and Holly Near was as much a movement event as a songfest.

There are also a number of very early gay rights posters, including a particularly beautiful one from 1971 for UC Berkeley’s Gay Student Union. The farmworkers movement is long known for its great art and posters, but even longtime UFW afficianodos may not have previously seen the striking poster for a David Crosby and Graham Nash benefit for the union.

But do not just take my word for it – buy the book and visit the Oakland Museum show (the book can be purchased at the Museum). Michael Rossman was a low-income hippie whose rigorous poster collecting defies negative perceptions of that group as disorganized and unfocused. Thanks to Lincoln Cushing, Rossman’s posters have found two great arenas for presentation, fulfilling his goal of preserving the history of progressive activism.