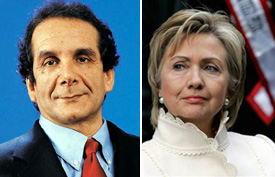 As I’ve written before, conservative pundits love Hillary Clinton and despise the party’s liberal base. While Karl Rove and George Bush have predicted that she will win the nomination, there’s a more basic reason why the right would be content with a President Hillary Clinton. It would not shift the political center of gravity, nor upset the current power structure where conservatives have flourished. In his October 12 column for the Washington Post, neo-conservative Charles Krauthammer lauded Hillary Clinton’s candidacy – calling her the “Great Navigator.” Never mind the rhetoric that she currently gives to win the primary, he said, for Hillary’s “liberalism is redeemed by her ambition; her ideology subordinate to her political needs.” While many liberals currently support Clinton, the right understands that – in a year where Democrats will probably win the Presidency – Hillary is the best that they can hope for.

Krauthammer begins his column by praising Bill Clinton’s two main domestic accomplishments: welfare repeal and NAFTA, the latter of which he calls “the crown jewel.” As Democrats like John Edwards have criticized the corporate-backed trade agreement and advocate its repeal, Hillary admits that NAFTA did not realize the promises that were made – and it should be reassessed every five years.

But don’t worry, said Krauthammer. Hillary didn’t exactly promise anything, and her artful statements – while appealing to the pro-labor base of the party – are capable of keeping NAFTA and other free trade agreements intact. Reassessing NAFTA, he said, could be as benign as studying the impacts and creating a task force with no results.

The same goes for Iraq. Hillary may have redeemed herself in the eyes of many liberals for initially supporting the War, but her rhetoric about bringing our troops home is ambiguous enough to keep the occupation far into her second term. Hillary resisted opposing the War until it was politically inevitable; and right now she won’t commit to firm deadlines that Democrats are clamoring for.

“I could never vote for her,” said Krauthammer, “but I (and others of my ideological ilk) could live with her – precisely because she is so liberated from principle. Her liberalism, like her husband’s – flexible, disciplined, calculated, triangulated – always leaves open the possibility that she would do the right thing for the blessedly wrong (self-interested, ambition-serving, politically expedient) reason.”

Would conservatives say the same about Edwards or Barack Obama? Of course not. As Democrats who don’t carry the Clinton-era baggage of triangulation, either candidate could be a genuine threat to the order that has kept Krauthammer – who appears regularly on Fox News – in positions of influence. While Republicans are in disarray about their presidential candidates, they understand that Hillary is the best option to re-group their efforts and stage a comeback.

Krauthammer has covered politics for decades, and remembers how Bill Clinton gave Republicans much to cheer about. Besides NAFTA and welfare repeal, Clinton signed the Freedom to Farm Bill, the Telecommunications Act (which helped Clear Channel dominate the air waves), and the Helms-Burton Act. He even signed the Defense of Marriage Act while denouncing it as gay bashing, but then advertised on Christian radio to brag how he supported it.

The right publicly hates Hillary – and every time that Karl Rove, Bill O’Reilly and others attack her it helps the party’s liberal base rally around her candidacy. It doesn’t matter whether Hillary promises anything substantive that will undo the damage of the Reagan-Bush legacy, as long as it gives Democratic voters an opportunity to “stick it” to the right. The fact that Hillary would be the first woman president only fuels the myth that she would be different, although it brings no guarantee of a more progressive future.

Conservatives like Krauthammer understand that, as America stands on the brink of a new progressive era, it would better serve their interests to have a President like Hillary who will appease the left with empty promises. If the Democrats nominate somebody else, the new President could actually try to bring substantive change. Hillary is a “safe” bet for them – since they know how much of a calculating opportunist she is, and how she has always avoided siding too much with liberals.

Two weeks ago, Senator Clinton voted for the Kyl-Lieberman Resolution – a neo-conservative bill that could lead us to preemptive war with Iran. As the New York Times reported, Hillary did this because she has “already shifted from primary mode to general election mode, when she must guard against critics from the right.”

In other words, Hillary has already betrayed progressives – three months before the Iowa caucus – because they have let her off the hook so easily. If she still had to fight Edwards and Obama for the Democratic nomination, she would not have voted for it. But because she is such an opportunist, Hillary has moved on to co-opt Republicans on “national security” grounds so that Rudy Giuliani doesn’t beat her on that issue in the general election.

Neo-cons could not be more pleased, and this is why they will continue to do what they can to make sure Hillary is the Democratic nominee. The trouble with Krauthammer is that he jumped the gun with his candor. Until the first primary votes are cast in Iowa, liberals are not supposed to know that the conservative political structure that has run the Beltway for decades would be happy with a President Hillary Clinton.

Which was Krauthammer’s mistake. But he probably assumes that the masses don’t read his columns. After all, he once wrote an op-ed in praise of low voter turnout, which shows his contempt for our democratic process.