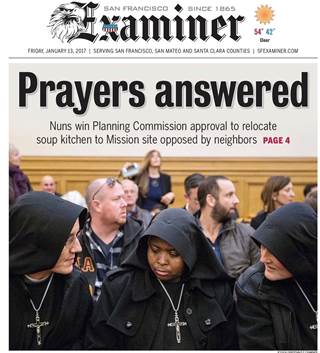 Why the Ongoing Delay in Mission Move?

It was the feel good story of the year: In March 2016 self-improvement leader Tony Robbins spent $750.000 to buy a new soup kitchen at 1930 Mission for a group of French nuns operating without adequate facilities in the Tenderloin. According to the San Francisco Chronicle’s Kevin Fagan, “the two nuns of the Fraternite Notre Dame Mary of Nazareth Soup Kitchen plan to tote their pots and pans over there by the end of April.”

April 2016. That projection was made a month after the purchase.

But in what should become a teachable moment for San Francisco’s receptivity to opening new businesses, this nice story soon encountered turbulence. In December 2016 an article stated that “residents in the soup kitchen’s new building are trying to block the nuns from relocating.” The attorney for the homeowner association  “filed a letter with the city Planning Department saying feeding the homeless is a wonderful thing but that the Mission condo ‘is not the appropriate location.’” The letter also raised concerns the facility could reflect future plans to develop the site.

The Planning Commission was slated to approve the soup kitchen in January—of 2017. And while residents turned out in opposition, Robbins was there along with Salesforce CEO Marc Benioff. Benioff told the Commission, “If we are not supporting these sisters, then I don’t know who we should be supporting. These are truly people who are doing God’s work.”

The Commission backed the nuns. And according to a January 12, 2017 story on the hearing “the sisters haven’t said what day they will relocate to the new Mission location, but they hope to pack up and move as soon as possible.”

Well, it is now two years later and the nuns are still in their original Turk Street location.  I look forward to the publications that covered this story returning to it so we can understand the ongoing delay.

And get the nuns into their new home before the three year mark passes.

Randy Shaw is Editor of Beyond Chron. He is also author of The Tenderloin: Sex, Crime and Resistance in the Heart of San Francisco.