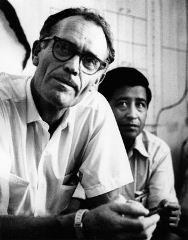 Activists, organizers and elected officials across the United States have come together to urge President Barack Obama to award posthumously the Presidential Medal of Freedom to the legendary organizer, Fred Ross Sr. The first to organize people through house meetings, a mentor to both Cesar Chavez and Dolores Huerta, and a pioneer in Latino voter outreach since 1949 when he helped elect Ed Roybal as Los Angeles’s first Latino council member, Ross’ influence on social change movements remains strong two decades after his death in 1992. If there were a Mount Rushmore for community organizers, Ross’s angular face would be on it. Here is a brief summary of Ross’s remarkable legacy, along with instructions on how to get your message of support to President Obama in time for the February 28 deadline.

Like all activists familiar with his work, I had a reverence for Fred Ross, Sr. before I knew the full record of his accomplishments. I learned much more about him when researching my book, Beyond the Fields, on the ongoing legacy of the farmworkers movement.

Unlike the thousands of organizers he trained, Ross had no mentor and was self-taught. He was a keen observer of CIO organizers in the fields during the Grapes of Wrath days, and figured out how best to organize the disenfranchised to build power.

While Saul Alinsky funded Ross’s work at the Community Services Organization (CS0), the innovative organizing strategies, including the house meeting approach that recruited Cesar Chavez and helped build the farmworkers movement, all came from Ross.

The Presidential Medal of Freedom

Since 1963, the Presidential Medal of Freedom recognizes those individuals who have made “an especially meritorious contribution to the security or national interests of the United States, world peace, cultural or other significant public or private endeavors.” Last year, President Obama conferred the award on Dolores Huerta who recognized Ross as the organizer who mentored both her and Cesar Chavez.

For nearly half a century, Fred educated, agitated and inspired people of all races and backgrounds to overcome fear, despair and cynicism. He was a pioneer who fought for racial and economic justice. On the occasion of his 80th birthday, House Minority Leader Nancy Pelosi said, “Fred Ross Sr. left a legacy of good works that have given many the courage of their convictions, the powers of their ideals, and the strength to do heroic deeds on behalf of the common person.”

At Fred Ross Sr.’s Memorial Service in 1992, Jerry Cohen, former UFW General Counsel stated, “Fred fought more fights, trained more organizers and planted more seeds of righteous indignation against social injustice than anyone we’re ever likely to see again.” The late Jessica Govea, a UFW organizer trained by Ross as a teenager, described him as “the purest organizer I ever knew.”

Fred Ross, Jr., himself one of the great organizers of our time, views an award of the Medal of Freedom to his father as honoring far more than a single person. “Honoring Fred Ross, Sr. is really recognition for the foot soldiers in all struggles that do the day to day work but rarely get acknowledged for their labors. It’s about honoring the farmworkers, low-wage urban workers, and all those fighting for social justice against what many see as insurmountable odds.”

If you agree that Fred Ross, Sr. deserves this honor, you must contact President Obama by February 28. Here are four actions you can take:

• Write to President Obama via the President c/o Julie Chavez Rodriguez, Associate Director of Latino Affairs and Immigration for the Office of Public Engagement at the White House: Julie_C_Rodriguez@who.eop.gov.
• Call your Congressional Representative to urge them to sign the congressional letter to President Obama right away. The Capitol Switchboard # is: 202-224-3121. Note: San Francisco Bay Area Reps are already on board
• Contact your own U.S. Senators and urge them to write their own letters of support to President Obama.
• Organize your friends to take the above actions; use social media, face book, your blogs to share Fred Ross Sr.’s legacy and promote his nomination for the Presidential Medal of Freedom.

Fred Ross used to say, “Good organizers never give up—they get the opposition to do that!” In that spirit, please take a few minutes on Fred Ross Sr.’s behalf and join others across the nation in urging the President to honorone of the great unsung heroes of our time.

Randy Shaw is Editor of Beyond Chron. He is the author of Beyond the Fields: Cesar Chavez, the UFW and the Struggle for Justice in the 21st Century, and The Activist’s Handbook