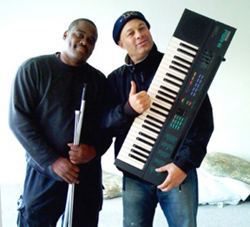 Another of my favorite drummers is none other than San Rafael’s Narada Michael Walden. From his early days with John McLaughlin’s Mahavishnu Orchestra, (replacing the amazing Billy Cobham), to his chart-topping work with Aretha Franklin, Walden has also proven he’s a one of a kind producer and songwriter. This Saturday night, Walden and his band journey to Mill Valley’s Throckmorton Theater, in a benefit concert for the family of his dear friend, the late, great chef, Anton Perkins. Walden not only brings together some of the top Bay Area studio and concert musicians to perform his hits, he supports and encourages great young raw talent as well. The core of his group has worked together for more than 30 years on projects ranging from the Rain Forest Benefit at Carnegie Hall for Sting and Trudie Styler, to recording hits for Whitney Houston. Their live show is always alive and fresh under the inspired leadership of Walden on drums.

Among a handful of the most innovative, original and influential artists of our time, Narada Michael Walden’s stature as an authentic musical renaissance man is a matter of record – a lot of records, in fact. Artists as diverse as Aretha Franklin and Wynonna Judd; Stevie Wonder and Tom Jones; The Temptations and Jeff Beck – these and literally scores of others have sought out this consummate creative catalyst to fashion some of the biggest hits of their careers. The multi-Grammy winner (with Producer, Album and Song Of The Year awards to his credit) has been at the helm of hit music that spans decades and flows freely from pop, rock, soul, hip-hop and country, to the rarified realms of jazz, fusion, world music and back in again.

Along the way, Walden was an integral part of introducing such superstars as Whitney Houston and Mariah Carey to millions of fans worldwide, by creating the breakthrough hits that first brought these divas in to the spotlight. Small wonder Billboard Magazine honored him as one of the Top Ten Producers of all time.

Yet, as impressive a production and songwriting resume as Narada Michael Walden has assembled over the past thirty years and counting, he has earned equal acclaim as a recording and performing artist in his own right. Beginning with his stint as part of the pioneering Mahavishnu Orchestra in the early Seventies, through eleven acclaimed solo albums and numerous appearances at the top of the Pop and R and B charts, Walden has given a whole new meaning to the term “multi-tasking.” Along the way he has branched into a wide range of sonic arenas, from groundbreaking soundtrack work on such smash films as The Bodyguard and Stuart Little to the Emmy-winning “One Moment In Time,” perhaps best known as the theme to the 1988 Olympic Games.

The list goes on, but the artistry of Narada Michael Walden is about more than charts positions and record sales. There is a powerful spiritual component at the heart of everything this richly gifted artist undertakes, an attuned and intuitive approach with a deep appreciation for music’s transforming power. Simply put, the artistry of Narada Michael Walden gets to the heart of matter, about matters of the heart.

It’s a commitment that reaches into the philanthropic arena as well, where Walden consistently lends his time and talent to causes ranging from the Cancer Society to funding music programs in the nation’s schools. For six straight years he has served as Music Director for the Rain Forest Concert at Carnegie Hall, the high profile conversancy benefit spearheaded by Sting and Trudie Styler that has featured such marquee names as Elton John, Billy Joel, Ravi Shankar, Nina Simone and, of course, Sting himself.

Walden’s prodigious energies have consistently kept him on the cutting edge of today’s, and tomorrow’s, music. Following up on the founding of his Marin County-based Tarpan Studios, he has recently announced the creation of his new custom label, Tarpan Records and recruited a number of promising young songwriters for his thriving publishing and production company. Aside from playing .. tracks for the new Stevie Wonder album, as well as producing the smash all-star tribute to late great genius of soul, Ray Charles and Friends, Walden has also written and recorded soundtrack material for the intriguing documentary, Guitar Man, which explores the world of vintage guitars and is set to premier at this year’s Sundance Film Festival. Walden has also recently completed production on the debut album from acclaimed new vocalist, Naomi Streimer, whose debut single, “Cars” features special guest Carlos Santana.

In the midst of this flurry of activity, Walden is simultaneously hard at work on an eagerly awaited new solo album, highlighting a stellar line-up of friends and fellow musicians including Stevie Wonder, Carlos Santana, Ishmael Lo, Chris Botti, Clarence Clemons, Sting and many others. With awesome abilities matched by a truly humble spirit, Narada Michael Walden is not only one of the most sought-after talents of our era: he is also one of the most admired, emulated and authentic. You can hear it in his music.

Walden’s band is an experience that culminates in a crescendo of energy and inspiration. This is a band of Supreme Musicians, blending influences of generations and cultures; creates music that encompasses primal drums, classical influences, motown, disco, funk, hip hop and rap and stirs it into a harmony of all eras that is uplifting and exhilarating. It is indeed genderless, timeless, ageless.