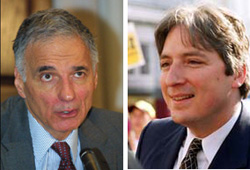 At 9:00 a.m. Pacific Standard Time today, presidential candidate Ralph Nader announced at a Washington DC press conference that his running mate will be former San Francisco Supervisor and Board President Matt Gonzalez. Beyond Chron was the first media outlet in the country to report this story. We were unaware of Gonzalez’s plans when he wrote a guest editorial for us yesterday, and so did not disclose it at the time.

Gonzalez ran for Mayor in 2003, coming very close to becoming the first Green Party mayor of a major U.S. city. On February 5th, Nader won the California primary for the 2008 Green Party nomination with 60% of the vote. This is Nader’s fourth consecutive run for the Presidency. His running mate in 1996 and 2000 was Native American activist Winona LaDuke. His running mate in 2004 was Peter Camejo.