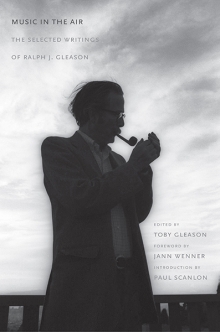 I didn’t know anything about the Ralph J. Gleason cult until I began researching my 2009 book on Ramparts magazine. (A longtime music critic for the San Francisco Chronicle, Gleason was also a contributing editor at the legendary San Francisco muckraker.) But once initiated, I began to see Gleason’s fingerprints everywhere. I read all his work on the Grateful Dead, the topic of my subsequent book, and found that his articles hold up well after five decades. Perhaps for that reason, virtually every new title on the 1960s San Francisco counterculture uses Gleason as an authoritative guide.

Gleason split with Ramparts in 1967, the same year he cofounded the Monterey Pop Festival. Later that year, he also cofounded Rolling Stone magazine and gave it early credibility within the music industry. If that’s all he ever did, Ralph J. Gleason would be a notable figure. But he was also a leading jazz critic, cofounded the Monterey Jazz Festival, wrote the liner notes for Lenny Bruce’s comedy albums, testified for the defense at Bruce’s San Francisco obscenity trial, and became the only music journalist to land on President Nixon’s Enemy List. When Gleason died in 1975, Greil Marcus wrote his obituary for the Village Voice. “Ralph was always open to anything new,” Marcus wrote, “not merely open to it but eager to fight for it, as he fought for Miles Davis, Duke Ellington, Bob Dylan, Joseph Heller, Lenny Bruce, the Free Speech Movement, Rock ‘n’ Roll, the San Francisco Sound, the Fillmore Auditorium when San Francisco was ready to close it down.”

Given Gleason’s stature, I wondered why there was no biography. When I met his son Toby, I learned that his father’s papers were still held by the family. That helps explain the dearth of research and lack of name recognition even among late Baby Boomers. I asked Toby whether he would consider editing an anthology of his father’s work. One thing led to another, and this year Yale University Press published two volumes: Music in the Air: The Selected Writings of Ralph J. Gleason and Conversations in Jazz: The Ralph J. Gleason Interviews. These works are a fine start to what should be a shelf of books on Gleason and his achievement.

Music in the Air is divided into four parts: jazz and blues; folk, rock, and pop; comedy; and politics and culture. The sections reflect Gleason’s main interests as well as his impressive range. Most of the pieces appeared either as liner notes or as articles in the Chronicle, Down Beat, Ramparts, or Rolling Stone. The prose is informal but on point. One selection is especially notable for its style; in Gleason’s hands, the liner notes for Miles Davis’s Bitches Brew (1970) turns a promotional form into a kind of e.e. cummings prose poem.

The jazz and blues section makes up almost half the book, and its contents show why Miles Davis and others sang the critic’s praises. Gleason was aways more than a good listener and perceptive writer. He respected the music and the black artists who made it, male and female, all the more so given the extraordinary demands America made on them during the Jim Crow era. (Only three white musicians—Vince Guaraldi, Cal Tjader, and Frank Sinatra—are considered in this section.) Gleason frequently takes his readers backstage to reveal how the artists comported themselves away from the spotlight. His long essay on Louis Armstrong, written for Rolling Stone after Armstrong’s death in 1971, describes his virtuosity and enduring influence, but it also details the appalling racism Armstrong had to overcome at every stage of his career. “I’ll explain and make it plain,” Armstrong sang in The Real Ambassadors, “I represent the human race.” Gleason adds: “And that is precisely what he has done.”

Gleason is tougher on Sinatra, whom he admired early on. “He had the sound and the sliding grace of a good cellist and he phrased like a horn player … He gave you the feeling of reaching out to you, either speaking to you or for you, depending on the lyric.” By 1974, however, Gleason’s feelings were mixed. “It is simply weird now to see him all glossed up like a wax dummy, with that rug on his head looking silly, and the on-stage movement, which used to be panther-tense now a self-conscious hoodlum bustle.” He continued to credit Sinatra’s singing but not his persona. “The voice is good today. Those warm tones are there and the phrasing. He can really do it like a real professional,” he wrote. “But I don’t believe, anymore, that he is one of us.”

The folk, rock, and pop section includes pieces on the Beatles, Elvis Presley, Bob Dylan, Jefferson Airplane, and Altamont, which Gleason saw as the end of 1960s San Francisco utopianism. Later, he accepted his portion of the blame for that lethal debacle. “There are no specific guilty parties for Altamont,” he wrote in a 1971 review of Gimme Shelter. “We were all guilty, myself included.” Gleason freely admitted that had little feeling for country music, but his piece on Hank Williams, whom Gleason heard at a dingy club in San Pablo, is extraordinary. After the show, Gleason found Williams backstage. “He was a little stoned and didn’t seem to remember our conversation earlier in the day and the party was beginning to get a little rough. They were whiskey drinkers and so I gave them room, looked around a while and then went on back out.” Six months later, Williams perished in the back seat of his car.

The comedy section is dominated by Lenny Bruce, whom Gleason befriended, promoted, and defended at every turn. When he wanted to compliment Bob Dylan’s personal honesty, Gleason compared him to Lenny Bruce. That Simon & Garfunkel dedicated Parsley, Sage, Rosemary and Thyme to the late comedian is further proof that Bruce was “a secular saint.” Like jazz, Lenny Bruce represented freedom for Gleason, and despite his immense respect for Duke Ellington, Bruce may be the central figure in this volume.

The politics and culture section is relatively light. Not surprisingly, Gleason detested Nixon and warned against his reelection. “I know you are tired of politics,” he wrote in a June 1972 piece for Rolling Stone. “Can you know how tired I am?” But Gleason also retained a healthy skepticism about the left. For him, politics always followed culture, not vice versa. He liked to quote Plato on this point: “Forms and rhythms in music are never changed without producing changes in the most important political forms and ways.” That’s one reason Gleason cofounded Rolling Stone and dismissed Ramparts as “the white hope of the square left.” The pieces in this section hint at Gleason’s sensibility, but there’s something missing. He had an enormous network, and the ideas he tried out in his correspondence were often more pointed and intriguing than the ones presented here. A few of those letters might have enriched this section.

If Music in the Air features Gleason’s range, Conversations in Jazz is quite focused. Most of the fourteen conversations were recorded in Gleason’s Berkeley home during the 1960s. All of the artists were men, and all but one (Bill Evans) were black. The guests included John Coltrane, Dizzy Gillespie, John Lewis, Sonny Rollins, and a young Quincy Jones. Gleason’s contributions to these colloquies were modest; mostly he started the artist talking about his work and background. The conversation with Duke Ellington is drawn from Jazz Casual, the public television program Gleason hosted in the 1960s. Although interesting, this exchange lacks the informality and intimacy of the other ones.

The book’s emphasis falls heavily on craft, musical apprenticeship, and influence. Several men mention the jazz clubs and musicians they knew from their neighborhoods while growing up. They used the big bands as a training ground, and the constantly shifting lineups ensured a wide variety of informal mentors, many of them now obscure. They traveled widely and noted differences between European and American audiences. They were eloquent about the times they found the groove, floating in time with no sense of fatigue. Few had specific plans or aspirations; instead, they wanted to practice their craft, make a living, and perhaps take a break from the incessant travel. For all their challenges, they were part of a vital, intergenerational, black art culture that supported them and their families. There’s nothing nostalgic or elegaical about these conversations—to the contrary, they’re straightforwardly professional and rooted in their midcentury world—but Armstrong biographer Terry Teachout is right that reading them is like “digging up a chest full of buried treasure.”

Conversations in Jazz contains no images, but at least one famous photograph was taken at those Ashby Avenue exchanges. After a 1960 gig in San Francisco, John Coltrane didn’t know the way to Gleason’s house; in fact, he didn’t know the way to Berkeley. Photographer Jim Marshall drove him there and took pictures. Coltrane’s portrait now hangs in the White House. Richard Nixon must be spinning in his grave.

Peter Richardson teaches humanities and American studies at San Francisco State University. He has written critically acclaimed books about the Grateful Dead, Ramparts magazine, and Carey McWilliams, the prolific California author and former editor of The Nation. He serves on the board of the Bay Area Book Festival and received the National Entertainment Journalism Award for Online Criticism in 2013.