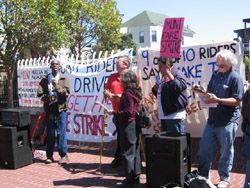 On Monday, activists held a press conference at the corner of 24th and Mission to protest the second MUNI fare hike since 2003. The 25-cent increase was approved this spring by MUNI’s governing body, the Municipal Transportation Agency, which has been facing a $57 million budget gap. Protestors said they would not pay the increase, and announced a fare strike beginning this Thursday, when the increase goes into effect. Strikers will ride the MUNI as usual, but will refuse to pay the fare.

“Make the bosses take the losses – we won’t pay!” chanted Michael Lyon of the Gray Panthers, a seniors’ advocacy group. Like most speakers, Lyons argued that the increase will fall hardest on low-income people, immigrants, seniors and students, and that city transit caters disproportionately to wealthy areas downtown.

“All over the city, they’re building ‘transit villages’ and they’re subsidizing the rich – they’re subsidizing downtown,” claims Alicia Schwartz of POWER (People United to Win Employment Rights). Downtown San Francisco has more MUNI service than lower-income areas such as the Mission, Bayview Hunters-Point, or Chinatown, she argues. “Why are poor and working-class people paying for the rich?”

The fare hike coincides with service cuts to over thirty lines and 200 proposed driver layoffs. An Examiner article printed Sunday stated that the drivers would be spared, through offers of early retirement, but protestors such as Riva Enteen are skeptical.

“Not one of those [layoff] notices has been rescinded,” contends Enteen, who urged unity between MUNI riders and drivers. Enteen also stressed that the fare strike would be peaceful, and told those gathered “not to be confrontational with drivers – tell them you’re on strike, and if they won’t let you on without paying, pay as little as you can to ride.” A volunteer legal team will be on hand to assist protestors ticketed for fare evasion. Enteen pointed to successful fare strikes in Los Angeles and Chicago as evidence of the tactic’s efficacy. “This is not over until we win,” she stated. “September 1 is just the first day.”

The service cuts also rankled with many protestors who felt that they were being asked to pay more for less. One longtime MUNI rider, who wished only to be identified as Sally, complains that “MUNI’s already an austere, barely working, held-together-with-paper-clips system. Some people will say, in its defense, that New York has a $2 fare,” she adds, “but their system also works a lot better.”

MUNI officials point out that the price of the $45 monthly Fast Pass has not changed, and that the agency is now offering a $35 monthly “Lifeline” pass to riders on public assistance. However, Tiny Gray-Garcia, a homeless single mother, says that many people are unable to pay $35 upfront, and will still be hit by the fare increase. “These hikes will make it impossible for me to afford [taking the bus to] my low-wage jobs,” she laments. “They’ll make it impossible for us to even work in San Francisco.”

Others simply warned of a sliding slope. “If we allow the city to keep doing this to us, there’s not going to be a stop – ever,” cautioned Jose Alfaro, a 48-year resident of San Francisco affiliated with the San Francisco Day Labor Program. “We’re going to end up with our pockets empty.”