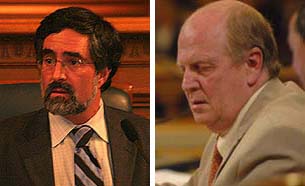 Everyone agrees that Muni is struggling, but not everyone has the same solution. In 2005, voters rejected Proposition D to reform the Municipal Transit Authority (MTA) – despite the unelected body having just passed a fare hike and service cuts that adversely affected low-income riders. Now two Supervisors who both supported Prop D have each submitted a Charter Amendment for November, with widely divergent solutions.

Jake McGoldrick would reduce the MTA’s power by allowing the Supervisors to amend its budget, which could prevent future fare hikes and service cuts. But Aaron Peskin would increase the MTA’s clout. All revenue from parking meters and fines ($26 million) would go directly to Muni, and the MTA will have exclusive authority to regulate parking and traffic. While this would guarantee funding for Muni, it will not change a basic issue – who gets to decide Muni’s budget priorities.

Under the current Charter, the Mayor appoints all seven MTA Commissioners, who have the exclusive authority to set bus fares, make service decisions and pass the budget. The Supervisors can only reject the entire MTA Budget without making changes, and only by an 8-3 majority. Two years ago, after the Board failed to reject a Muni Budget with fare hikes and service cuts, Supervisor Tom Ammiano sponsored Prop D – which would have split the appointment of MTA Commissioners between the Mayor and the Board of Supervisors.

There are many reasons why Prop D failed – few resources due to the lack of a bus riders union, fierce opposition from Mayor Newsom and his downtown business allies, over-confidence among progressives that the voters would support reducing the Mayor’s power, and a distraction of attention from fighting the Governor’s special election. But the fact remains that Muni needs reform, and structural changes are needed to get a world-class transit system.

Everyone agrees that Muni needs money – and it’s certainly part of the problem. Barriers in state law and voter reluctance to pass taxes have also made it difficult to raise money. Two years ago, Aaron Peskin championed a Downtown Assessment District that would fund Muni by making corporations pay their fair share. Today he proposes taking parking revenue that currently goes to the General Fund and have it go directly to Muni. It’s a good step, but does not create new revenue – and would only bring one-fourth the money that Muni says it needs to properly function.

The Board of Supervisors already has the discretion to put General Fund money to Muni, so Peskin’s amendment would merely require that the $26 million in parking revenue go directly to Muni. And while it would create a dedicated fund towards Muni, it would necessarily mean the Board would have less money to fund everything else.

But the other issue is how Muni spends it money, and Peskin maintains the status quo. But under McGoldrick’s proposal, co-sponsored by Gerardo Sandoval, the MTA would submit the Budget to the Board of Supervisors, who could then alter expenditures as they can for any other City Department’s budget. So if the MTA again passes fare hikes and service cuts, the Board could alter the budget to respond to the needs of low-income riders without putting Muni’s entire budget in limbo. Sandoval sponsored a similar measure two years ago, but it was not put on the ballot.

Peskin’s proposal also includes other portions. It would admirably require the MTA to set a “Climate Action Plan” to reduce Muni’s greenhouse gas emissions, but I’m skeptical – given the MTA’s track record – for this to materialize if it passes. The City Charter already calls upon the MTA to “diligently pursue” other revenue sources for Muni, while they have been quick to balance the budget on the backs of riders. It also mandates an 85% on-time record for buses, while Muni currently lags behind at 70%. Without consequences, such lofty goals don’t mean anything.

Finally, labor unions are skittish about parts of Peskin’s proposal that would give administrators more power to fire MTA employees. While websites like SFist have extensively covered stories about incompetent bus drivers who bring their girlfriends on the bus, stop the bus for 20 minutes to go get some coffee and the like, this is a case of a very small number of “bad apples.” And while everyone complains about overtime pay for bus drivers, part of the problem was that Muni went through a hiring freeze – which created the necessity of overtime. I doubt it’s appropriate to scapegoat the system’s problem on people who work for Muni.

While it’s been two years since Prop D’s defeat, there is no question that Muni is not working and needs some serious reform. There’s a desperate need for more money, but there’s also a need for more accountability as to how the money is spent. Guaranteeing $26 million in parking revenue for Muni is a good idea, but the Board should also be able to make changes to the budget so that the MTA can’t just impose more fare hikes and service cuts.

Aaron Peskin has said that he’s working to compromise his proposal to make it more palatable for his Board colleagues. Taking a look at McGoldrick’s proposal should be one of these steps.