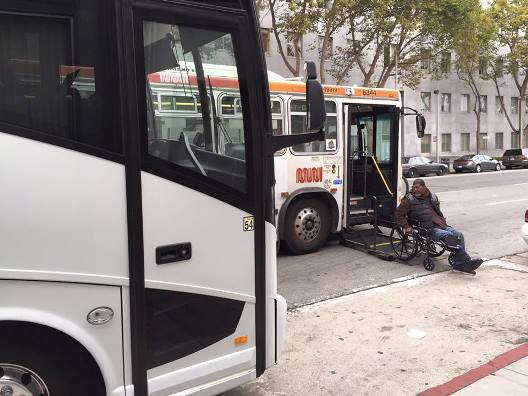 The “commuter shuttles” to Silicon Valley and biotech firms have been much written about, with a major exception: their effect on MUNI passengers with disabilities.

Lack of consistent and widespread monitoring allows this reverse-commute service to get away with mutual blocking of MUNI busses, impacting people with disabilities. This blocking has been reported, and sometimes photographed, at the former MUNI stop on Van Ness & Pine as well as at the two current Noe Valley stops on 24th St. & Church.

This occurs when two shuttles are boarding their passengers at the curb and a MUNI bus comes along.

Another example of this blocking occurs when a shuttle pulls into the short yellow zone and taxi stand on Church @ 24th; this curb space is so short that the last 1/3 of the bus sticks out past the corner and across the front end of the bus stop for the 48 line. This either prevents the 48 bus from having space to pull in to the curb; or, as I have experienced, if the bus is already there, it cannot pull out but must wait for the shuttle bus to pull away from its illegal stop.

City agencies’ report that one person, in the greater Noe Valley area, accounts for a disproportionately high number and percentage of complaints. The magnitude of these statistics from just one small part of San Francisco shows there are problems not being addressed. Yet MTA continues to ignore how commuter shuttles’ negatively impact service to passengers who need lifts for boarding/ exiting.

Similarly those waiting MUNI passengers who are blind or have very low vision cannot quickly & easily tell where the MUNI bus is.

These problems of denial of access for people with disabilities were mentioned, months ago, at an MTA board of directors meeting, which was considering authorizing a follow-on version of the pilot program. But no action was taken.

MUNI passengers often have to take 2 or even 3 busses to get to their destination. Statistically, this means that there are many more people with disabilities riding MUNI than are riding the shuttles, and many more using MUNI’s lifts than using lifts on the commuter shuttles.

There is no indication that MTA monitors these private fleets to be sure that ALL are lift-equipped and that these lifts work. The previously mentioned stalwart Noe Valley citizen-monitor did not notice whether all commuter shuttles were lift equipped — and definitely did not see anyone boarding or exiting via a lift.

The standard approach to analysis about low-income people’s transit needs relies on Title VI parameters / factors, which are unrelated to people with disabilities. CEQA, NEPA, and FTA requirements /parameters were passed or delineated long before there was an Older Americans’ Act and /or the Americans with Disabilities Act [ 1990].

Bob Planthold writes columns on Disability Perspectives and is a longtime activist in San Francisco on senior and disabled issues.