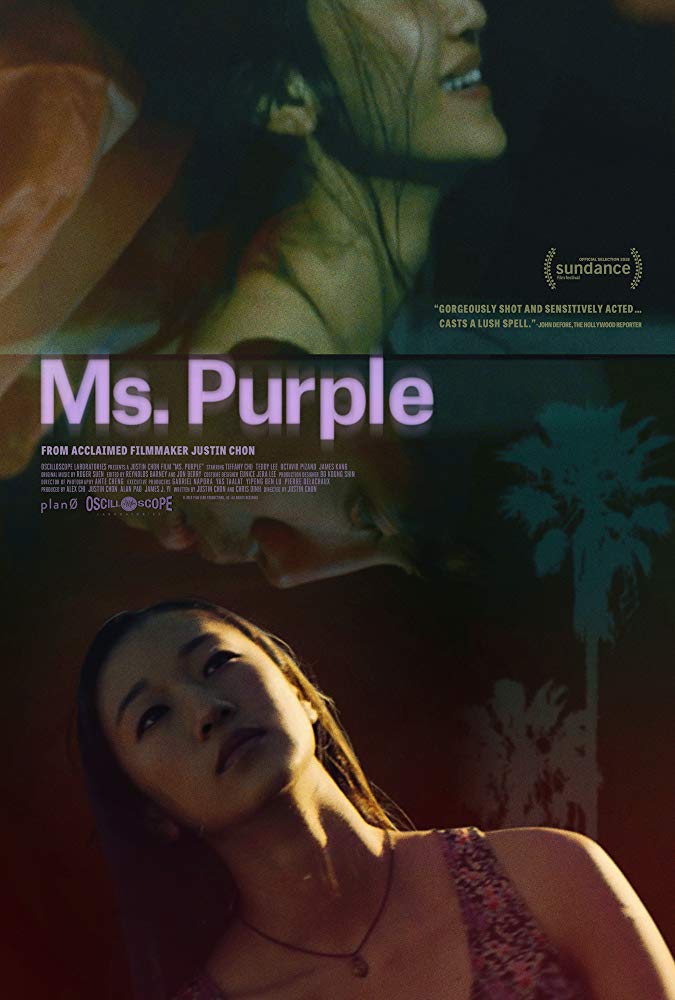 With “Ms. Purple,” Justin Chon’s follow-up to his acclaimed “Gook,” classical music gets turned into the inner voice of its central character Kasie.  That viola-heavy music mourns lost dreams and opportunities yet cannot envision the possibility of personal change.

As a result, like Ari Aster’s “Midsommar,” Chon’s film depicts emotional darkness thriving in the midst of sunlight.  There may not be much physical violence or any horror in “Ms. Purple.” But the sunshine suffusing the film’s Los Angeles’ Koreatown setting does little to heal the trauma of a broken family or the emotional toxicity of heavily embracing often sexist cultural tradition.

The damaged family at “Ms. Purple”’s center is nominally headed by father Young-il.  He raised his children Kaysie and Carey alone after his wife walked out on him. However, the abusiveness of Young-il’s parenting methods led to Carey’s becoming estranged from the family.

A lingering illness has long left Young-il bedridden and on the edge of death.  A refusal to accept that Young-il now needs hospice care has caused Kasie to lose the nurse who takes care of her incapacitated father while she works as a karaoke club hostess.  In desperation, Kasie approaches Carey about becoming their father’s caretaker. When Carey accepts the job, both siblings will slowly confront the demons of their past and even rebuild their shattered family.

Carey’s willingness to take the caretaking job isn’t necessarily a matter of family loyalty.  He’s unemployed so he regularly hangs out in a video game parlor. Helping out Kasie means he’ll have a roof over his head as well as some regular meals.

On the other hand, Kasie’s brother is on a subconscious level still terrified of Young-il despite the latter’s current comatose state.  The older man’s willingness to punch out his son capped a lifetime of emotional abuse where Young-il continually undermined his son’s self-esteem.  Carey’s wheeling his bedridden father throughout Los Angeles’ streets comes across as a playful rejection of the authority the older man once held over him.  However, the son’s playfulness is in one abrupt moment revealed as a facade for his still lingering terror of the older man’s anger.

Kasie, by contrast, initially appears to be Carey’s polar opposite.  Working as a karaoke club’s doumi girl, she’s an attentive hostess to the wealthy businessmen who patronize the club.  In fact, one of her regular rich clients wants Kasie to become his kept girlfriend.

However, this doumi girl’s life isn’t as golden as it initially appears.  Is her heavy soju drinking and regular MDMA use really just part of the job?  Being frequently passed over by clients because her bust isn’t large enough must surely affect her self-esteem.  Even the financial out provided by the wealthy client she has sex with turns out to be a less ideal arrangement in actuality.  An expected public arm candy role and friction over sending Young-il to a hospice winds up putting a strain on their relationship.

It’s Carey who provides the key to his sister’s slowly understanding the roots of her barely acknowledged unhappiness.  Kasie has repeatedly sacrificed her own dreams and needs to help other men still feel loved and needed…even when they didn’t necessarily deserve it.  Honing her promising classical piano talent was left fallow so Kasie could emotionally and later physically support Young-il. A sexual encounter between Kasie and her wealthy patron comes across as satisfying only him.  Her work as a doumi merely means the lead character is getting paid for what she’s already doing emotionally for Young-il.

If Kasie’s personal sacrifices reflect the impact of Korean sexist cultural attitudes in shaping the young woman’s life, that reality could explain a couple of the film’s plot points.  Of the two siblings, only Carey still longs on some level to be reunited with the mother who abandoned their family. Kasie’s lack of interest in such a reunion suggests lingering resentment towards the woman who humiliated her father and rejected her and Carey.

The other plot point involves a hanbok.  For the unaware, a hanbok is an expensive Korean kimono-like garment worn for formal or ceremonial occasions.  Kasie wears the hanbok to her doumi job and proceeds to drink recklessly, as if her actions were giving the middle finger to the cultural expectations that controlled her life.  Her use of the hanbok in this non-traditional manner also serves as a rejection of the man who bought her this pricey piece of clothing as a gift.

Kasie’s traditional Korean garment also gives a major clue to explaining the film’s title.  Purple is the color of the hanbok worn by this doumi. The saleswoman who fits Kasie into the hanbok notes how the club hostess is one of the rare people whose skin tone works with that color.  This small comment gives this woman whose identity is usually defined by men’s needs something she can personally hold onto for self-definition.

“Ms. Purple” should not be taken as one of those films where a woman gains her emotional agency by finding the right guy.  There’s nothing wrong with devoting one’s life to helping others. But surely aiding others shouldn’t require subsuming personal identity as a key requirement of the job.

Tiffany Chu’s Kaysie may appear continually cool and distant at work.  Yet Chu shows that when her character’s usual blankly placid mask slips off, there’s a warm personality underneath.  The viewer sees this happen most frequently with the smiles that Kasie gives Carey. Instead of the business smiles she gives customers, these warm expressions truly reaches her eyes.

Music in “Ms. Purple” helps bring out the emotional states of its guarded and sometimes inarticulate siblings.  As mentioned above, viola-heavy classical music mourns Kasie’s unhappiness at her father’s impending death and the emptiness of her flesh toy relationship with her rich patron.  A jazz sequence full of clashing notes brings out Carey’s years of pent-up rage towards his now comatose father. Lively Mexican music doesn’t demean Kasie’s sadness at Young-il’s impending demise; instead it symbolizes the possible emotional renewal Ottavio offers her.

“Ms. Purple” does falter a little by leaving the backstory of the family’s maternal abandonment as a simply selfish act.  In a flashback, the mother left Young-il because he was a loser. But what sort of life did she envision with Young-il and her children?  Why did her disappointment justify cutting off future contact with Kasie and Carey? Did Young-il serve as a convenient scapegoat for what seems to be a desire to abandon her Korean heritage?  (Despite being dressed in traditional Korean finery, Kasie and Carey’s mother doesn’t even offer a polite “Oh, the kids look nice.”) As is, the ex-wife and mother remains a one-dimensional villain.

If Chon’s film fails with the unnamed mother character, it does redeem itself by showing the forgiveness and acceptance through which Kasie and Carey rebuild their family ties.