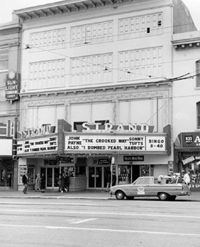 IT WAS RECENTLY REPORTED IN A NEWSPAPER ABOUT CITIES USE OF PLAZAS AND MAJOR STREETS. THE REPORT SAID THAT SAN FRANCISCO’S MARKET STREET IS HIGHLY UNDER UTILIZED.

Hey, I could have told them that. No need to have a study – it’s pretty obvious. One end of Market (the pretty clean end) is dead after 6pm. The other end (Mid Market) has a lot of buildings that if fixed up could bring charm to the street. Sort of like “The Gas Light District” in San Diego. Other cities have managed to save “The Old”. After all if Tourists wanted to see San Antonio, they would go to San Antonio. I once told a big developer in the City, who is now dead – that companies like his is killing the Golden Goose. It’s beginning to look like Denver, I told him. That’s the City that destroyed their Denver Theater. In fact they completely demolished the entire downtown district in favor of cookie cutter glass buildings. BORING! No Atmosphere. We started on the same path when the City virtually gave the Fox Theatre to a developer. And what did they do? Knocked it down, that’s what. What’s in store for Market St.? Greed or Heritage?

In the heyday of Market Street hundreds of San Franciscan’s flocked to downtown theaters to see a film. The Theaters that they went to were designed to take audiences to wonderful faraway places. The experience started with the lobbies. Fabulous and rich they were, with the Art Deco, Egyptian and Chinese Architecture. Movie going became memorable, and the experience started at the door.

SCENE II: Then worse than a disaster movie. The multiplex is born. Big Biz muscled influence over distribution companies – shutting out the one-screen independents. Most on Market Street were forced to close and many were demolished. Market Street suffered at the loss of these Main Street attractions that brought hoards of people to the City. A safe street is a crowded street, with people having fun and places to go like Cafes, Restaurants and Theaters. There are only a few theaters that have been saved on Market Street. The Orpheum (originally Pantages), The Strand Theater (shuttered), The United Artists, The St. Francis (shuttered), The Warfield (Rock music), The Golden Gate and The Electric Theater (now called something else). Two of them, The Strand and The St. Francis are probably going to disappear if something isn’t done soon.

SCENE THREE: Here’s Damn good advice: The City should take over The Strand and the St. Francis by eminent domain. Turn them into community Theaters where the vast array of Small Theater Companies could put on their shows. Or, The City and should turn them into entertainment centers for various venues. The Paramount in Oakland does it quite successfully. A movie now and then, a Ballet, An Awards Ceremony. The wonderful Theater is always booked. Not only do these theaters affect our heritage – they greatly could affect the economy of Market Street – that in its present form could never be called “That Great Street.” Where is the vision? It sure ain’t in the planning department. Remember all the lights under the “Plane” Trees on Market St.? After spending Millions to light up each tree – after a few weeks they covered them up with gravel. “People were throwing things in there” – they said. For all I know they are still lit and costing a bundle in electric bills.

SCENE FOUR: Let all remaining Theaters put back the Marquees That the City made them remove. Look at them in the photos – they ad sparkle to Market. Make the owners of the Theaters light them up – even if the theater is closed.

Since 1980 – the number of Theaters that have closed is Thirty-Five. Shameful! Keep them open as centers of community life. A Street needs life. And Market Street is not only under utilized – it is gasping for life and vision.

THEN OF COURSE THERE IS THE ALTERNATIVE. SAN FRANCISCO COULD BECOME DENVER WEST.

BILLBOARD BLAST (we blast and they listen)

In New York Disney announced that it plans to open a stage version of “Tarzan”. Disney is now the “King Kong” of the Great White way. Or you could say “The Lion King.” What will the ads say: “Tarzan Sings!” Probably.

A NOT SO SHAMELESS OBSESSION is the Play “After Dark” at the New Conservatory Theater on Van Ness. Demand is so great that they have extended the run. It’s a wonderful love story that takes the audience on a wild journey. Don’t miss it!

BUZZ IS LOOKING FORWARD TO: The Magic Theatres “Hothouse’o6” – Magic’s National platform for New Plays. It kicks off on Feb. 11 with “The golden rooms of Nero”, by Steven Sater. The indulgent, political and personal world of Nero comes to life on the stage. Sounds like our Nero – doesn’t it?

GAY COWBOYS are roping them in San Francisco – but word from Concord is that the Theater where is opened in this non-cowboy town is that there were over 200 empty seats on opening. Is that a surprise? I don’t think so. Even if they wanted to – those guys over there would not like to be seen going to a movie about Gay Cowboys.” They will simply come to San Francisco to see it. That, they can get away with. “Brokeback Mountain” without Concord is doing very well at the Box Office – and there is Oscar talk. You just can’t shut Oscar up – can you?

FLICKER BIT:
THE FUN IS OVER FOR JIM CARREY. In his latest movie “Fun With Dick and Jane” – Carrey is so over the top that you really feel like fleeing the Theater to get away from him. Like most comedians – he’s always on all four burners…causing a flame-out. Those that like lot’s of “dirty words” will probably love it. I’m taking away his “Fun Card”. RATING: TWO BOXES OF POPCORN!!

Don’t wait…you still have until Dec. 31 to See “The Hopper Collection” at the Magic Theater. Intriging and thought provoking drama. It’s powerful, and I highly recommend it.

And this is the final week for A.C.T’s “A Christmas Carol”. A totally new rendering of the famous story that will amaze and thrill you. Directed by Carey Perloff.

“Lestat” – is in previews at the Curran Theater. The reason for so many previews before the official opening on Jan 8, is to shake it down and fine tune. I have my Vampire outfit waiting by the door. Look for me – but keep you neck covered.

STOP THE PRESSES! NEWS THAT YOU WILL WANT TO USE: Performer and playwright Michael Phillis will give a whirlwind tour through his life in a high-energy new solo performance at the New Conservatory Theater called “D’face”. Of his show he says: “dark sides were tucked away in closets, and the possibilities were limitless.” Starts Jan 26. On Jan. 27 in another NCTC Theater will be Richard Kramer’s “Theater District”. In this ménage a trois we discover a new definition of family, uncovering secrets, suspicions and unlikely alliances. This is the first stage play written by famed TV writer Richard Kramer. He has written over 100 screenplays. One review of the play sez: “It has punch…it has passion.” …also headed for NCTCSF is Lanford Wilson’s acclaimed play “Burn This”. What an exciting Theater Season. Just think – you will be able to show off all your Xmas Gift Clothes.

TRAILORS: Can’t get out of the house? Well you can always catch Regis Philbin on T.V. He will host a new version of “This Is Your Life” for ABC. Didn’t the original guy just die? What happened to the mourning time?

QUOTE OF THE WEEK: “Someday I’ll have wrinkles and I won’t make it to a cover of a magazine, and maybe people won’t want to hear my songs anymore.” — Singer Shakira. …..You’re Right!

HAVE YOU SEEN LESTAT? LET ME KNOW IN A MINI REVIEW. buzzblogpost@yahoo.com