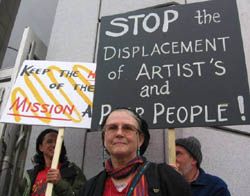 Longtime resident, artist, and pillar of San Francisco’s Mission District, Susan Cervantes, claimed a victory last week when a judge ruled that she did not have to leave her home of 35 years – yet.

In response to the three-day eviction notice that landlords Douglas Wong and Pearl Yee served Cervantes in July, no fewer than 50 people assembled at 9:00 a.m. on Friday to rally against it, and similar evictions that have been sweeping the City. For half an hour, tenants rights activists and Susan Cervantes supporters stood in front of 400 McAllister, refuting the displacement of artists and poor people, before Cervantes and her attorney stood in a court room and received word that their motion to take the eviction to trial was granted.


Widely acknowledged for her part in creating hundreds of murals in the Mission, including those along the Women’s Building and Balmy Alley, Cervantes is known locally for her commitment to the Precita Eyes Arts and Visitors Center, of which she is the founder and director. The Center, which is one of only three community mural centers in the United States, brings art into the daily lives of people through its offering of classes, workshops, and low-cost supplies to both children and adults. It also has served as a starting point for more than 20,000 students and tourists who have taken the eight-block Mission Trail Mural Walk offered by the Center.

“She’s such a fixture in the neighborhood,” commented Ted Gullicksen, president of the San Francisco Tenants Union. “That’s why this eviction is particularly egregious.”

Despite her significance as a cultural cornerstone, and the significance or her work as historical and artistic references, Cervantes might be forced to leave the home where she has paid rent for more than half of her life. Located just a short distance from the Center, her apartment has been more than just a place to live; it has served as both a studio for Cervantes and her late husband Louis, and as the birthplace for two of their children.

“It is sacred and holy ground and should not be demolished,” said Cervantes, adding that for the landlords who want her to leave, it seems that making an investment is more important than human life.

Wong and Yee bought the three-story property at 398 Precita Ave. in July of 2005 and gave Cervantes a three-day notice to leave. Because the previous owner had converted the bottom floor, zoned for commercial use, into a residential unit, they claimed that her residence was an unlawful use of space.

Representing Supervisor Tom Ammiano, Tomas Lee said, “I don’t think those evicting [Cervantes] know the contributions she’s made to this city or the respect she’s gotten in the artistic community worldwide.”

Gullicksen explained that the first-time landlords are using the wrong “just cause” for their eviction. Had they gone about the process correctly, he continued, they would have issued reason number 10 of the 14 just causes for eviction under rent control. According the SF Tenants Union Web site, number 10 states that “the landlord seeks to demolish or otherwise remove the unit from rental housing use, has obtained all the necessary permits, and does so without ulterior reasons and with honest intent.”

“Demolishing a unit can take a while,” noted Gullicksen, adding that the landlord(s) must give the tenant 30-days notice in addition to obtaining the appropriate permits. The tenant may then argue the case and so the process can take even longer.

“But with an illegal-use just clause, which is what [Wong and Yee] used, a landlord can give just a three-days notice,” Gullicksen said. “It’s a classic example of a pretext eviction. They’re trying to get Susan out because of her low cost of rent.”

Community activist Richard Marquez pointed out that the Mission is always on spectators’ lists because the cost of housing there is often half of what it would be in other areas.
“The Mayor seems to be working toward gentrifying the city – people are charging outrageous rent and the low- and no-income can’t afford it,” said longtime Mission resident, Iris Biblowitz. “That’s why we’re seeing more and more low- income people having to leave San Francisco,”

If evicted, Cervantes said she would likely be one of those emigrating, which is why fellow muralist, Marta Ayala, attended the rally. She recalled that when Cervantes’ husband, Louis, was alive, he and his wife were the people that artists went to with their queries and conflicts. “They were the Diego and Frida for us here in San Francisco,” said Ayala, referring to Diego Rivera and Frida Kahlo, who had been influential Mexican artists.

If Cervantes leaves, Ayala insisted, the muralists of San Francisco will not know where to go. “We don’t want to get lost.”

Meanwhile, Cervantes’ attorney, Raquel Fox of the Tenderloin Housing Clinic, said she was pleased with the outcome Cervantes’ first court appearance, and Cervantes herself promised to continue putting up a fight.

“We will continue the struggle for everyone,” said Cervantes, adding that what is happening to her is just a microcosm of the injustices going on all over the world.