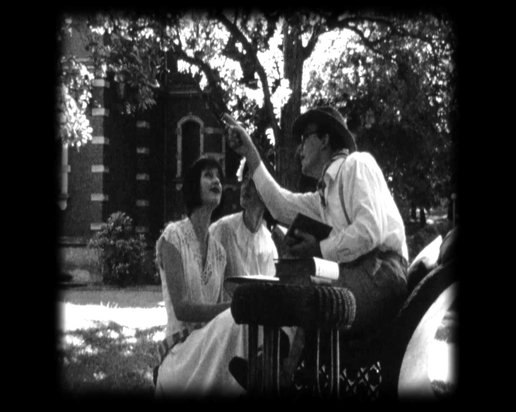 Viewers who approach David Simanis’ oddball semi-documentary “Escaping Riga” with hopes of seeing a Latvian version of Guy Maddin’s wonderfully bizarre “My Winnipeg” will be disappointed.  Maddin’s presence provided a lens to view his love/hate relationship with his birthplace.  Simanis by contrast comes across as hiding his feelings about the birthplace he never left.

The less than stellar cinematic results come from Simanis’ approach to his subject.  Early on, he hopes that by studying the lives of two famous sons of Riga, he can gain insight into his own life.  These two men were famed Soviet auteur Sergei Eisenstein and influential historical philosopher Isaiah Berlin.  Yet as Simanis shows the apples and apples matches of Eisenstein’s and Berlin’s lives, it’s never shown or stated how these biographical parallels matter to the filmmaker’s own existence.

“Escaping Riga” generally lacks Maddin’s gift for making apparently bizarre behavior appear like common sense onscreen.  The closest Simanis gets to a Maddin-like moment onscreen comes whenever the film shows an Eisenstein theatrical production.  Sights from these productions include seeing “Die Walkure” performers swing back and forth on cables or the visual chaos caused by releasing greased pigs among audience members. Otherwise, Simanis’ film is content to playfully embroider Eisenstein’a and Berlin’s biographical material.  He would have done far better to madly rip this factual material apart and patch it together in far more surprising ways.

Who knew milk cows could threaten the state of Israel’s security?  Yet those eighteen cows, “The Wanted 18” referenced by Amer Shomali and Paul Cowan’s darkly comic documentary, symbolized for the Palestinians of Beit Sahour independence from Israel’s economic and political bootheels.  This strange but true tale from the days of the First Intifada is an entertaining account of popular resistance.  A quartet of stop-motion animated talking cows act as both Greek chorus and bovine witnesses to the Palestinians’ resourcefulness.

Casimir Nozkowski’s touching short documentary “70 Hester Street” delivers a wonderful ode to the joys of living in a place with deep historical roots.  The titular address belongs to a building that has in the past been a synagogue, a shower curtain factory, and even the site for a homemade whiskey still.  Its current occupants, Nozkowski’s parents, are a painter/sculptor duo who have used the space to store and display their artwork.  Now the elder Nozkowskis’ 45 years of residence at the former synagogue is ending.

Despite that mournful set up, the sweetness of remembered sensation overcomes any sadness the filmmaker feels.  Whether it’s the welcome creak of old floorboards or the sunlight coming through the former synagogue’s stained glass window, Nozkowski shares on camera his joy at having spent part of his life in a building whose past resembles that of a living sequoia tree than a skeletal hand.

It wouldn’t be surprising if the workmen re-modeling 70 Hester Street eliminates its alcoves under the stairs or throws out the odd scrap of old Jewish prayer books.  Whoever the building’s eventual upscale tenants are, to them the building’s history is affectation, not a living trust.

The French historical drama “The Law” turns the art of political negotiation and private deal-making into the stuff of riveting drama.  Director Christian Faure’s tense presentation of both the human interests and the societal stakes behind the film’s central struggle makes the story engrossing even for those who have little knowledge of the French legislative process.  Viewer interest in Faure’s film is helped greatly by knowing the titular law’s aim, the legalization of abortion, is currently being legislatively undermined in the United States.

An incredible Emmanuelle Devos anchors “The Law” in her role as Jacques Chirac’s Health Minister Simone Veil.  Her job is to both introduce a law legalizing abortion in France and ensure its passage.  However, her own party’s support is fractured.  The leftist parties’ backing feels contingent on their appetite for the perfect over the good.  Meanwhile, the anti-abortion activists treat any tactic as fair game to defeat the proposed law.

Veil conducts several battles at once over the four stressful days covered by the film.  Her struggles to gain support or at least non-opposition to the law resemble the building of a Jenga tower.  Passage of the law needs to be balanced against sacrifice of the law’s more controversial portions.  Finally, an air of strength has to be constantly projected in the face of sometimes obnoxious public denunciations of the bill.

Devos demonstrates her ability to convey carefully controlled feeling in her performance as Veil.  That control probably helped her real-life character survive the Holocaust.  In a nice touch, smoking serves Veil as a form of stress release.  It pays off with a telling close-up of a cigarette nearly turned to complete ash.

Balanced against Veil’s travails are the adventures of fictional Express journalist Diane Riestrop (Flora Bonaventura).  As a witness to both the desperate women who seek illegal abortions and the self-righteous opponents of abortion access, her experiences let the viewer see the real people behind the rhetorical abstractions debated in the French Parliament.  Any concerns that Diane is nothing more than a story-telling device are allayed by her obvious passion for this struggle.

“The Law” is set in 1975. Ongoing present day arguments over abortion access says more about the sexism and religious extremism of the Right than it does problems with the procedure.