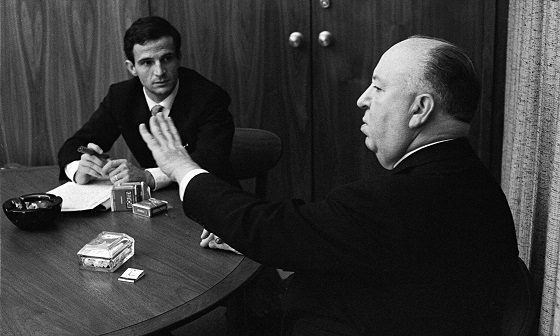 Kent Jones’ engrossing documentary “Hitchcock/Truffaut” captures the making of a seminal moment in cultural history.  The famed series of conversations between directors Alfred Hitchcock and Francois Truffaut get revisited via contemporary photographs and recording excerpts.  Sadly, certain personal Hitchcock anecdotes are lost to posterity.  Appreciations from a uniformly male collection of directors such as Oliver Assayas and Wes Anderson help viewers look deeper at Hitchcock’s films.  Too bad Hitchcock himself could not reconcile delivering both entertainment and artistry.

If you’ve ever passed by San Francisco’s Women’s Building, you’ve been exposed to Edythe Boone’s work.  For this Bay Area muralist is one of the seven women responsible for the great “MaestraPeace” mural that adorns the exterior of this hallowed community space.

But as Marlene “Mo” Morris’ documentary “A New Color: The Art Of Being Edythe Boone” shows, there’s more to Boone’s resume than just that public collaborative mural project.  Morris’ camera catches Boone helping supervise the restoration of “MaestraPeace,” working with junior high school children to create a mural celebrating good nutrition, and collaborating with seniors on a mural honoring child and teen victims of neighborhood violence.

The 73-year-old Boone came of age at a time when art careers were not something blacks were expected to aspire to.  An aunt’s encouragement provided emotional support.  But that support was supplemented by Boone’s own sense of justice and dignity.  In a telling incident from Boone’s childhood, she conducted an impromptu sit-in when luxury apartment staff didn’t believe she was a resident’s guest.

Boone’s political activism can best be described as low-key but still vital.  She heard Dr. Martin Luther King, Jr. speak on the National Mall during the 1963 March on Washington.  The temple where Malcolm X had been assassinated was a few blocks from her home.  The Black Lives Matter movement impacted her because one of her nephews was the late Eric Garner.

The film’s title literally refers to Boone’s lifelong attempts to create a never-before-seen color.  It also serves as a metaphor for a life that exists far outside the old societal expectations that blacks’ careers solely revolved around service to whites.  When Boone gets an art museum exhibit of her work, it feels like a validation of her life path.  As the muralist memorably says towards the film’s end, “You can’t change your beginnings, but you can put a nice beautiful ending to the story.”

Sol Friedman’s satirical animated short “Day 40” gives the Noah’s Ark tale a welcome dose of realistic fantasy.  As Friedman (and artist/writer William Messner-Loebs did before him) notes, the darkness a man (or animal) has inside him inevitably gets carried out into the wilderness.  In “Day 40”’s scenario, the Great Flood does not inspire Noah or the animals he saves to unleash their better angels.   Instead, being stuck on the crowded ark soon leads the vessel’s inhabitants to re-assert their predatory ways or even sin like crazy to avoid dying of boredom.

Friedman’s short suggests the perennial popularity of the Noah’s Ark story comes from its appeal to the glorification of self-centeredness.  Essentially, Noah and his family survived because of their special relationship to God compared to the sinning masses.  Yet, as the short shows, survival of one disaster is not a permanent charm against harm.

Pippa Bianco’s Cannes award-winning short “Share” resembles those classic “Twilight Zone” episodes where unlucky protagonists must face a personal horror alone.  Yet the horror “Share”’s teenage female protagonist faces comes from the ubiquitous interconnectivity of the Internet.  A compromising video starring the girl has been shared on the Web by a classmate to their local social circles.  Now she must attend school ignorant of which classmates have viewed the video.

Despite the short’s brief running time, “Share” skillfully builds an atmosphere of paranoia.  Which of the stares and prolonged looks at the protagonist comes from classmates who have seen the video and have judged her?  Just as the well-being of ants is subject to the whims of humans, the female lead is at the mercy of the slut-shaming whims of her classmates.  The mood of fear is so well-established that the sound of a new message chime becomes a source of suspense and anxiety by the end.

What’s ultimately disturbing is that constant worry will be the protagonist’s new status quo.  The embarrassing video will always be somewhere available on the Web.

House hunting gets a hilariously neurotic spin in Charlotte Schioler’s comic short “By Any Means A-Veilable.”  An unnamed Parisian (Schioler) wants to wisely spend her inheritance money to buy a new home.  Her neurotic fears of getting cheated prompts her to carry a tape measure to find out apartment sizes.  So why does tracking down a niqab become an essential part of her house hunting?

What keeps this tale from being  “white person cheerfully playing at being Islamic for a day” is the mental obliviousness of the unnamed protagonist.  From her viewpoint, the niqab allows her to anonymously gather information on apartment size.  She has no conception that her fellow white French citizens do focus on her clothing because it’s a sartorial lightning rod for antagonisms resulting from racial and cultural differences.  Schioler’s character is fortunate the cops didn’t question her for suspicious behavior.  But it’s unfortunate that the short’s protagonist doesn’t appear to be any wiser than before.