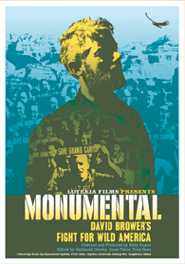 If filmmaker Kelly Duane had her way, David Brower would be credited for doing more than establishing both the Redwood National Park and Point Reyes National Seashore or halting dam construction in the Grand Canyon.

In her new documentary Monumental: David Brower’s Fight for Wild America, which opens for a week at the Roxie Theater on Friday, Duane asserts that Brower is almost single-handedly responsible for changing the public view on the idea of the wilderness. He wasn’t just the greatest environmentalist since John Muir; he was the greatest environmentalist. Okay, she doesn’t say this, but she leaves this statement at the end of the film so you will remember it.

Her case is a compelling one. Brower as Executive Director of the Sierra Club, worked to have Redwood National Park and Point Reyes set aside for public use and stop dam construction in the Grand Canyon. He was also instrumental in getting Congress to pass the 1964 Wilderness Act, an important piece of legislation that declared large tracts of wild areas off limit to human development, a practice that was booming after World War II. He was also the driving force in transforming the Sierra Club from a regional hiking group into a political force.

Brower was inspired by Ansel Adams, a lifelong friend and drinking buddy, to think of his 16-mm film as a canvas. His first moving film of King’s Canyon, shot in grainy 16-mm, led to the establishment of that wild area as a national park. His film of Glen Canyon-before it was turned into a dam-hits you right in the gut, because it was his lone compromise that allowed this beautiful area to be flooded.

Brower’s 16-mm home movies are reason enough to see the film. The home movies span 40 years, and give the viewer a look at how things have changed. Whether it’s two Navajo riders coming into view on a plateau with stunning mountain vistas in the distance or traveling down the Colorado River in a raft and being surrounded by glowing red rock canyons, these home movies are the documentary’s soul. They give us a glimpse into the past, and possess a wistful sadness that you can’t help but let haunt you.

We know as we watch these home movies that Yosemite Valley doesn’t look like he shot it, now it’s a parking lot. The colors of the red rock canyons overlooking the Colorado River aren’t as bright as they once were. Something’s missing. We will never see these places again, or if we do see them, they just won’t feel as wild.

These home videos do what film is supposed to do: transport you, and make you feel emotions you didn’t feel before you arrived in the theater. But stirring emotion is not the only reason why Duane has put these home movies into her film. She does it to make you view the wilderness through Brower’s eyes, to get a sense of why he felt the need to fight for the wilderness.

Brower fought for wilderness when it was still a righteous ideology not an environmentalist fundraising tool. Wait, did I mention that Duane credits Brower with that as well? Putting fear into the public to protect the wilderness before its. gulp. too late. This approach is still the bedrock of the environmental movement. Grab your attention, enlist your support, and scare the hell out of you to get your money.

Duane, who co-directed and produced “See How They Run,” about Willie Brown’s 1999 mayoral re-election bid, is obviously enamored with her subject. If you like the wilderness at all, Brower is an uncompromising hero. But uncompromising heroes make for little complexity.

We witness the Glen Canyon mistake and Brower being pushed out of the Sierra Club because he issued a progressive advertisement, but there is nothing else that reveals the inner torment or passion that drove him. Only once are we confronted with someone who disagreed with him. It’s one of the film’s great moments; your enemy, a government worker who wanted to make the Grand Canyon safe for water skiers everywhere. But beside this, there is no real differing point of view. Everyone agrees with Brower.

We are living in the golden era of documentaries. Put aside Michael Moore and his box office clout for a moment and look at the documentaries that have been released within the last three years: films as diverse as “Winged Migration,” “Capturing the Freidmans,” “Spellbound,” and “The Fog of War,” raise the bar. Duane is guilty of using the conventional yet antiquated linear story line, dulling down the rich subject matter of “Monumental.”

The thing I missed the most was learning what older David Brower thought of his younger self, accomplishments and mistakes. The filmmaker makes the tragic mistake of covering the last 20 years of David Brower’s life with less than a paragraph of words against the screen. It’s a shame. See the recent documentary about writer Charles Bukowski to realize just what we’re missing by skipping over a man’s older, less glamorous years.

I’m sure an older hardened activist like Brower had a unique perspective on the civilization we live in and the wild places we go to get away from it all. Maybe like his buddy Ansel Adams, old age made him view the wilderness as more dramatic, a constant struggle of force against force, the contrast between light and darkness as the sun sets on the high Sierras. Maybe not, but it sure would have been interesting to find out.