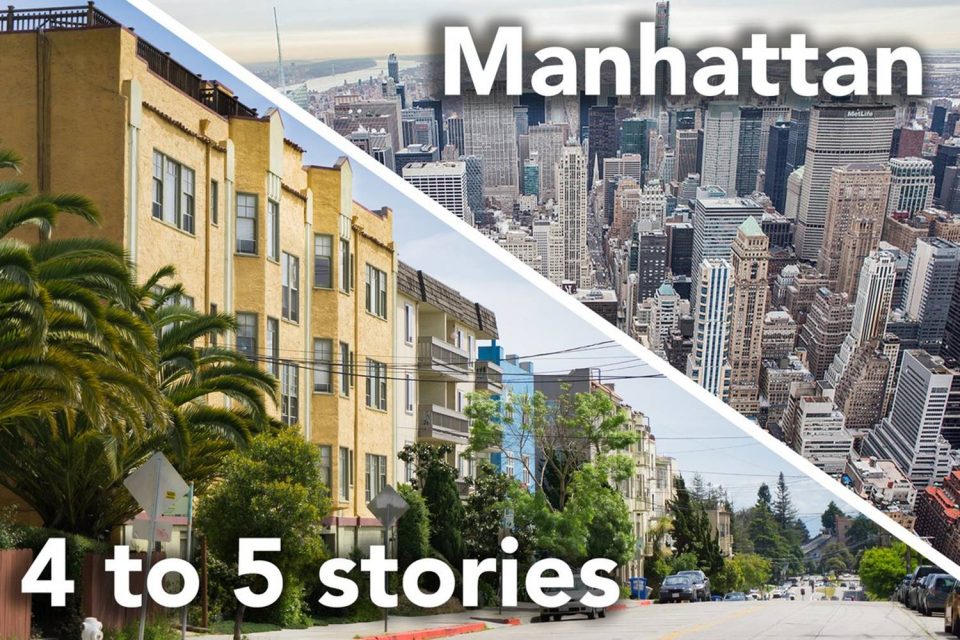 In the same week that Minneapolis passed historic legislation legalizing apartments in single-family zoned neighborhoods, California legislators introduced SB 50, a far reaching state challenge to exclusionary zoning laws. Sponsored by Bay Area State Senators Nancy Skinner and Scott Wiener along with other legislators, the More HOMES bill is already on a roll. SB 50 has won critical backing from the state Building Trades Council, leading mayors, and legislators from across California.

While a previous effort at state involvement in local land use law faltered earlier this year (SB 827), SB 50’s momentum shows the political shift toward housing that has since occurred. Three factors distinguish SB 50 from its predecessor.

First, Skinner and Wiener addressed many of the core problems that defeated SB 827. Most importantly, SB 50 sponsors outreached to Los Angeles groups and included tenant and rental housing protections in the original version of the bill—rather than adding them later as amendments as occurred with SB 827.

Further, Nancy Skinner is taking on a more public role. That is very bad news for opponents—no state legislator has a stronger history of backing both environmental and tenant rights than Skinner.

Skinner recently responded to claims that SB 50 would cause “Manhattanization” by tweeting a photo of Manhattan next to a scene of 55 foot tall buildings (see photo above). The falseness of the “Manhattization” argument became obvious.

Second, whereas SB 827 seemed to come out of nowhere, SB 50 is seen as a long overdue strategy for California to effectively battle climate change and housing unaffordability.  The bill is a timely response to the recent report from the California Air Resources Board that the state’s ambitious climate change goals cannot be met unless driving is reduced.

You cannot reduce driving without limiting the long car commutes caused by homeowner opposition to infill apartments. An estimated 120,000 people commute from Sacramento the Bay Area each day, with car commutes causing even worse greenhouse gas emissions in Los Angeles. It’s hard to see how people can consider themselves “environmentalists” when their land use positions promote long car commutes and sprawl.

The third reason SB 50 may be unstoppable in 2019 is that California’s new Governor Gavin Newsom sees solving the housing and homelessness crisis as a top priority. That is a major shift from Jerry Brown, who never cared about affordable housing and did not add one general fund dollar to funding this vital need. Brown was a great governor in many areas, but when it came to housing he fiddled while the state’s affordability crisis worsened.

Newsom promoted new housing as far back as 2004, with his unsuccessful Workforce Housing initiative. This followed his 2002 Care Not Cash ballot measure to reduce homelessness. SB 50 is essential for Newsom to fulfill his  goal of the state building 3.5 million new homes by 2025.  He will help persuade legislators to enact it.

I had a long meeting with Scott Wiener in September about the new legislation. He agreed that provisions protecting tenants had to be included in the new bill. We disagreed over whether to cover upscale neighborhoods. . I felt it was a political mistake to mobilize wealthy Los Angeles communities with close ties to Mayor Garcetti and where apartments were unlikely to be built anyway; he thought covering already gentrified communities was essential.

Wiener was right and I was wrong. People love the portion of SB 50 targeting gentrified neighborhoods. It mirrors a core YIMBY perspective (e.g. East Bay for Everyone’s Upzone Rockridge campaign).

I argue in my new book, Generation Priced Out, that upzoning works best in already gentrified neighborhoods for two reasons. First, there is much less risk of displacing unprotected low-income tenants as the non-affluent lacking tenant protections have already been replaced. Second, and more importantly, upzoning tied to affordable housing requirements enables working families to live in high-opportunity neighborhoods from which they are otherwise priced out.

SB 50 expands working and middle-class housing options in such neighborhoods because, like San Francisco’s Home-SF and Seattle’s Housing Affordability and Livability Agenda (HALA), it ties increased density to adding affordable housing and tenant protections. This is realistically often the only way to get working and middle-class families into otherwise unaffordable neighborhoods.

Nonprofit affordable housing providers rarely build housing for the middle-class. And nonprofits are typically barred from building affordable working-class housing in upscale neighborhoods by zoning restrictions, homeowner opposition, or both. How many affordable housing developments for the working class have been built in the last two decades in San Francisco’s Bernal Heights, Noe Valley, Haight Ashbury or Marina neighborhoods?  I think the answer is zero.

Upzoning worries tenant advocates because it has promoted gentrification and displacement in New York City. But as I describe in Generation Priced Out, New York City’s upzoning was misguided because it promoted luxury highrise development in low-income and non-affluent neighborhoods. In contrast, SB 50 only allows buildings up to 55 feet and excludes the demolition of rent-controlled housing allowed in New York City.

The main opposition I have seen so far has come from the very affluent cities of Beverly Hills and Palo Alto. Beverly Hills recently fought against an expansion of light rail in Los Angeles, so at least its opposition to policies reducing climate change is consistent.

The Los Angeles-based AIDS Healthcare Foundation, which funded Prop 10 on the November ballot (Costa-Hawkins repeal) wrongly claimed before SB 50 was even announced that it was the same bill as SB 827. Tweets from the group have since described the #MoreHOMES measure as a tool for”gentrification.”

Such claims may resonate with allies of AIDS Healthcare but SB 50 displaces nobody. What has caused gentrification in Highland Park and other once affordable Los Angeles neighborhoods is the city’s failure to build enough affordable housing in at-risk neighborhoods and sufficient new housing citywide. Los Angeles’ failure to build anywhere near enough housing to meet population growth (the city has added one million residents since 1970) has led homebuyers priced out of  adjacent neighborhoods to expand their search to long affordable communities like Highland Park.

Still affordable Los Angeles neighborhoods like Boyle Heights are at risk of gentrification from four causes: evictions of tenants in non-rent-controlled buildings, wealthier residents buying existing single-family homes, inadequate building of 100% affordable housing and the Costa-Hawkins Act allowing unlimited rent hikes upon vacancies in rent-controlled housing. 55-foot buildings on non-residential sites along the area’s traffic corridors under SB 50 is not what puts Boyle Heights at risk (as I discuss in Generation Priced Out, tenant activists in Boyle Heights have done a remarkable job in fending off tenant evictions even when units are not covered by rent control. Boyle Heights could become a model of a Los Angeles neighborhood that successfully repelled gentrification).

Given that all of the San Francisco neighborhoods I mention above completely gentrified without virtually any new development, I have long been puzzled by claims that new market rate housing is the chief agent of displacement.  Ellis Act and owner move-in evictions do not involve any new development, yet these are what are displacing seniors and working families from the Mission and other neighborhoods.

Unfortunately, Ellis Act reform to stop speculator evictions and protect rent-controlled housing was not among the housing bills announced last week. Maybe the AIDS Health Foundation can get such a bill introduced, which would really reduce tenant displacement in San Francisco and Los Angeles.

The passage of SB 50 will not alone “solve” the supply component of California’s affordability crisis. The new housing still must get built, which means cities like San Francisco must expedite their glacial housing approval processes. Lenders must also be willing to finance smaller 45-55 foot high projects, which is a problem in cities where financial institutions prioritize highrise projects.

But SB 50 is an enormously important start. And while passage is far from a done deal,  I foresee a massive signing ceremony next year in which legislators surround Governor Newsom as he announces that California is finally addressing its affordability crisis.

The passage of SB 50 will make history. It will also offer a model for other states battling climate change and high housing costs.

Randy Shaw is Editor of Beyond Chron. His just released book, Generation Priced Out: Who Gets to Live in the New Urban America, has been added to “Curbed’s 101 Books About Where and How We Live.”