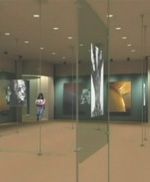 Long after the ceremonies dedicating the MoAD, the new Museum of the African Diaspora had concluded, former Mayor Willie Brown was across the street from the museum admiring the building’s glass facade and signature photo collage image of a Black child, pointing out to passers-by the various and unique aspects of the building as if he was the architect of the MoAD. While Mayor Brown did not put pen to paper to actually design or draw up construction plans from the MoAD, the former mayor’s vision and leadership in seeing the project through from inception to Saturday’s grand opening played just as important of a role in the building’s construction as the architects, builders, contractors and administrators who labored up to the last minute to prepare the MoAD for Saturday’s community open house that attracted thousands of people from throughout the Bay Area.

In fact, nearly every speaker at Saturday’s ribbon cutting said while a vision of a Black museum in San Francisco had been on the table for decades, serious efforts to build a museum dedicated to Black history and culture in The City did not take off until after Brown was elected mayor in 1995. The idea for an African American museum in San Francisco was born from anger at the San Francisco Redevelopment Agency’s urban renewal efforts of the 1960s and 1970s. Redevelopment Agency director Justin Herman ordered bulldozers to raze seven blocks of the Fillmore District, displacing thousands of African Americans and destroying scores of Black owned niteclubs, hotels and businesses in a community often described as the Harlem of the West. By the time Brown was elected mayor, the top priorities of the Redevelopment Agency had changed to include the restoration of the African American businesses and cultural facilities destroyed by Herman’s “redevelopment” efforts.

While the idea of African American museums around the country is not new, many Black museums have been located in historically Black communities, far from the most popular tourist areas and often run by volunteers with little experience or expertise in fundraising or the mysterious world of museum management. Black museums that did survive over the years cultivated a small but dedicated audience that supported exhibits of local artists, but few of these Black museums had the contacts, experience or financial resources to host a major exhibits of top Black artists such as James Van Der Zee, Jacob Lawrence, Henry Tanner and for the longest time, the Fine Arts Museums of San Francisco also expressed little interest in exhibiting art by top Black artists.

That all changed when Harry Parker was appointed director of the Fine Arts Museums in 1987. Parker had heard the complaints from African American tired of seeing major Black exhibits go to Oakland, Sacramento and Los Angels and worked to diversify the museum’s operations by changing the complexion of the museum’s mostly White board by getting Belva Davis, Frankie Gillette and other African Americans appointed to the museum’s board, and hiring African Americans to management and programming positions inside the museum. Davis, Gillette and Fine Arts Museum African American staffers played key roles in the seven year effort to obtain funds to initially relocate, and ultimately rebuild the de Young Museum, experience that would be critical in building the MoAD.

Brown was able to persuade Davis, Gillette and other Black professionals in The City’s arts community to support and develop a Black history and culture museum in San Francisco and to partner with the Redevelopment Agency, African American developer Fred Jordan and the Starwood Hotel Group to build the museum on the first three floors of the 40 story St. Regis hotel, in the heart of San Francisco’s growing Third Street arts corridor. It was quickly decided that the museum should not replicate efforts of existing African Americans museums, but should become the only museum in the world to focus on the influence and contributions of Black people around the globe. MoAD has created a unique partnership with the British Museum and MoAD director Denise Bradley intends to establish relationships with other museums around the world with important collections of Black art and culture. The MoAD will also be integral part of the Bay Area arts scene, showcasing work from local Black artists and providing an educational resource for Bay Area schools at a time when budget cuts have all but eliminated arts education at most Bay Area schools.

As former Mayor Brown prepared to cut the ribbon to officially open the MoAD, he remarked that of all his accomplishments during eight years as mayor of San Francisco, his proudest achievements were the restoration of City Hall and the creation of the MoAD.

The MoAD, The Museum of the African Diaspora is located at 685 Mission Street in San Francisco. Their phone number is 415.358.7200 and their website is www.moadsf.org. Opening week events include a free reception this evening from 6 to 8 p.m. for artists exhibiting in the current exhibit; and two gala events Thursday December 1 and Friday December 2 from 6-10 p.m. The museum officially opens to the public Saturday December 3. Regular hours will be 10 a.m. to 6 p.m. weekdays and Saturday, 10 a.m. to 9 p.m. Thursday, noon to 5 p.m. Sunday. Closed Tuesday.