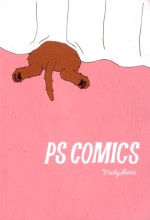 Midway through Minty Lewis’ newly released PS Comics, I got to thinking about Charles M. Schultz, the creator of Peanuts. Had Schultz introduced stories of Snoopy and Charlie Brown in the current era, his most productive years would have coincided with declining newspaper circulation and shrunken comic strips. Only graphic novel insiders would know the entire comic world he created. It may sound presumptuousness to link Minty Lewis and Charles Schultz, but like the Peanuts creator she has invented an entirely new world whose characters reveal deep insights about life. In Lewis’ case, her main characters are fruit, though dogs and salt and pepper-shakers also have their say. Lewis’ apple, pear, mango, lemon and others work in offices and have their own distinct personalities; their dialogue is both more realistic and more insightful than anything found in today’s situation comedies or the routinely sexist romantic comedies that fill our movie screens.

It may sound odd to be extolling a graphic novel whose main characters are fruit and dogs, but trust me: PS Comics will have you laughing out loud and urging your friends to read it. One way to describe the book is as a fruit-version of the television series Friends; but I never liked that show and identified more with Lewis’ apple, pear and lemon than with Jennifer Aniston and her brethren.

This is a book where the office romance between apple and banana is broken up by the latter’s romancing of kumquat. And where two dogs plot their marketing strategies before attending a Crafts Festival.

The book includes a series of interrelated vignettes, with the apple the equivalent — both in temperament and in her centrality — of Charlie Brown. Life is not a bowl of cherries for apple, who is the fruit-version of a young woman. In an earlier era, stories of apple’s love and work life would be a daily feature in hundreds of daily newspapers; today, fans have to hope that Lewis gets enough buyers of PS Comics to support future issues.

Graphic novels may be all the rage, but the vast majority of their creators must work “regular” jobs to survive. With fewer syndicated comic strips and even less newspaper space devoted to comics, artists like Minty Lewis depend on supporters to purchase their works.

We can’t give money back guarantees, but every person I have recommended PS Comics to has loved it — and the best way to ensure that we can read more about apple-pear-banana and lemon is to support this brilliantly creative work.