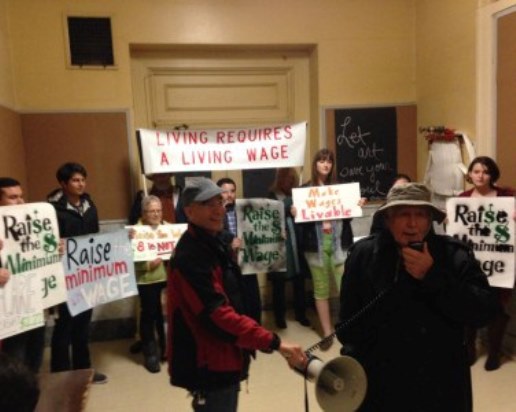 WE FINALLY WON! For the first time in Berkeley history, the vast majority of low wage workers, who are disproportionately women, racial and ethnic minorities, are now guaranteed a minimum wage.  Although this achievement was an uphill struggle — the climb seemed perpendicular  at times — a minimum wage proposal was just unanimously enacted by the Berkeley City Council.  Unlike San Francisco’s minimum wage ordinance, which was adopted in 2003, Berkeley has not until  now entered modern times by agreeing that the City of Berkeley has a legal obligation to improve the standard of living for very low wage workers.  Beginning on October 1 of this year the minimum wage will be $10 an hour. Next year wages will increase to $11.00 an hour.  In 2016, wages will peak at $!2.53.  Although it is certainly not a living wage, it will be among the highest in the nation!

Many activists have been disappointed, however, that the Berkeley City Council scuttled a more generous proposal submitted by its Labor Commission whose nine members were all appointed by members of the City Council!  But being disappointed is not the same as being discouraged.  An attempt will be made to persuade the City Council and to also craft a ballot initiative that will improve the current ordinance.  Working people deserve a wage hike to at least $15 an hour, an annual  cost of living adjustment, paid vacation and paid sick leave.  And they deserve it soon.  Seattle workers won a $15 an hour minimum wage, but for most workers it will not be achieved for seven years.

Paid sick leave is tremendously important.  The Oakland ballot includes a very good sick leave provision. In fact, an Oakland  poll showed that over 80 percent of the public support paid sick leave for working people . Workers should not be compelled to come to work ill because they cannot afford to lose wages. Nor should their co-workers be subjected to health risks.  And many of those who are dining out are unknowingly subjected to infectious diseases by sick workers who prepare and serve the meals  Paid sick leave, then, does not only protect sick workers. It is a critical public health issue.

How nice it would be if passing progressive legislation would complete our obligations.  But unfortunately, packing our bags and walking away from our victory would be a serious mistake.  The record on labor violations by businesses is  very high, and rigorous enforcement is often weak and even absent.  In a national survey of minimum wage violations, fully 26 percent were paid less than the legally required minimum wage.  Incredibly, 60 percent were underpaid by more than a dollar per hour.

As elsewhere, Berkeley workers have not been adequately protected from workplace violations.  Since the enforcement procedure is mainly complaint driven, workers who do complain have little protection against retaliation.  Moreover, their complaints are often ignored. So our task is to determine how best to combat the widespread problem of wage theft.

What Berkeley needs is a public agency that is responsible for enforcing compliance.   San Francisco’s Office of Labor Standards Enforcement serves as an ideal model for Berkeley.  According to its annual report, it recovered in the fiscal year 2012-2013 $1,483,048 in back wages and interest for employees who were victims of wage theft.

Workers in Berkeley are also entitled to an agency that protects them against wage theft. But only concerted action will make such a dream a reality.  Fortunately, we are on the way to building an alliance between labor and the community.  In fact, Along with low wage workers, the coalition of labor, religious institutions, progressive organizations, and unaffiliated progressive individuals explains why we have achieved a minimum wage in Berkeley. Continuing to work together will also give us a good shot at assuring that the minimum wage ordinance is fully implemented.  Public officials must protect the legal rights of working people who are honestly doing their job on behalf of their employers and the public they serve.