Minefield: Will Holder Be the Obama Cabinet Nominee Who Goes Down? 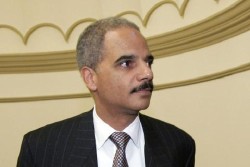 Lost in the speculation over a chimerical “filibuster-proof” Democratic Senate majority and in the justified praise of President-elect Obama’s sensible Cabinet nominations is a life lesson: No large batch of appointments makes it through the advise-and-consent process unscathed.

Even if the assembled team shows vision, balance, and a sense of security by the chief executive that he is in charge – as Obama’s does – and even if the political stars are well aligned – as they are – stuff inevitably happens in the glare of the vetting. Off-the-books nannies come out of the woodwork; alcoholism is uncovered; and even currently discredited interest groups marshal the evidence and psychological momentum to jettison one appointment and put a notch in their belts.

If I were a betting man, I’d say Attorney General-designate Eric Holder is the most vulnerable candidate for fall guy. I say this from a posture of pure analysis, and with the feeling that if I am right, it will not be a good thing for the country. An African American at the apex of national law enforcement would send an extraordinary signal that Obama, once he gets past the blather about the middle class that helped elect him, intends to turn purposefully to a real national conversation about race, class, and poverty.

In that sense, following through on the installation of Holder as AG is at least as important as whatever Clarence Thomas’s successful 1991 confirmation fight for the Supreme Court was supposed to represent. (Not only that – Holder, win or lose, will never avail himself of that self-pitying “high-tech lynching” rhetoric.)

But I also say this with the knowledge that Holder, though he boasts a perfectly plausible Beltway resume, is no Thurgood Marshall either. If Holder’s nomination fails, the Republic will survive. And at the level of power politics, I get the vibe that if any Cabinet designate might be in trouble, he is the one.

On Saturday, The New York Times, text messenger of the ruling class, ran an op-ed piece reinforcing the questions about Holder’s role, in the final days of the Bill Clinton presidency, in the 2001 pardon of billionaire commodities trader Marc Rich, a major campaign contributor. The author of the essay, George Lardner Jr., concludes that Holder, then the deputy attorney general, acted dishonorably in rubber-stamping Clinton’s request for a legal review of the proposed Rich pardon, which became the outgoing president’s principal backstop against criticism of an obviously sleazy decision. I think Lardner’s conclusion is unassailable. But I’m more interested in the threshold question of whether it sticks and has consequences.

To this point, all the attention has gone to the upcoming psychodrama surrounding Hillary Clinton as secretary of state. I think she’ll do fine. If she doesn’t – and specifically if she doesn’t because Hillary and Bill are up to their old manipulative ways – then I am even more confident that Obama will dump her or otherwise set things right. In any case, whether it’s via Hillary’s loyal service to Team Obama or via her narcissistic betrayal of it, the process (including the possible purge down the road) is a good one for the future of the progressive cause.

The Holder difficulty represents a different dimension of the Clinton Problem. The pattern of Bill and Hillary’s career has been to charm and bluster their way through scandal. But the fallout is seldom as kind to associates of theirs who seek to seize opportunities to move up in the world – even when the obstacle is not really scandal so much as it is being “Borked” by caricatures of their record. (Remember Lani Guinier?)

We have just elected our first black president. Historically, presidents are given free reign on their attorney general choices, picking cronies (Reagan’s Ed Meese), thinly qualified but droll mouthpieces (Carter’s Griffin Bell), and even brothers (JFK’s Bobby Kennedy) And that is as it should be. Frank politicization of that critically important position is lots healthier than the illusion of depoliticizing it.

Is an African American AG, on top of an African American president, more monumental change than the traditional power structure can digest in a single swallow? And if the answer is no, will Holder’s Clintonian Achilles heel be the pretext for bringing him down? I’m fastening my seat belt.

Irvin Muchnick is author of Wrestling Babylon and the forthcoming Chris and Nancy: The True Story of the Benoit Murder-Suicide and Pro Wrestling’s Cocktail of Death. He blogs at http://muchnick.net/babylon