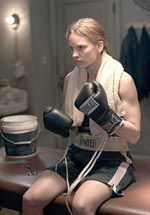 Boxing movies have a way of repeating themselves, and in their repetition, they form familiar, and largely appealing tropes. Many boxing movies are, somewhere inside, quintessentially America stories-stories of redemption, of perseverance, of strength and determination. Clint Eastwood’s latest film, and current Oscar contender Million Dollar Baby, will expand to several hundred more screens this coming weekend. The film, firmly rooted in the history of the boxing movie, challenges the genre in small ways, not least in placing a woman at the center of a generally male world. While the movie occasionally sheds light on some misguided assumptions about gender, it ultimately fails to elevate the genre beyond the rote generalism and sentimentalism of a more generic boxing movie.


Mr. Eastwood’s Million Dollar Baby is a story of grays, whites and blacks. The story, like the camera that tells it, lurks in the shadows, in fluorescent lights, and in the corners. The moments of daylight, all three of them, come so infrequently that one could hardly consider them a respite any more than intruders on an otherwise shaded world. And somewhere in all of this darkness, Mr. Eastwood buries classic melodrama underneath his methodic pacing and a group of wonderful performances.

While some may slight Mr. Eastwood a measure of the respect that he rightly deserves for both his illustrious acting career and his serious efforts at film making, no one could possibly fault him for inconsistency. Both as an actor and director, Mr. Eastwood has maintained a sort of rugged stoicism, evident everywhere from the detached growl with which he speaks to the etched lines that have amplified his acting chops in later years. This performance, both in front of and behind the camera, maintain these habits. In Million Dollar Baby Mr. Eastwood plays Frankie Dunn, a grizzled boxing trainer who never quite made it to the top. Dunn, gray hair and all, runs a boxing gym in a corner of Los Angeles that houses a collection of motley fighters. One ex-fighter, and also the smooth-sounding narrator of the film, Eddie Scrap-Iron Dupris (Morgan Freeman) lives and manages the day-to-day of the gym, while simultaneously acting as the spiritual conscience of Frankie.

Freeman’s performance, as the half-blind (his eye a dusty gray) sage, lends a certain gravitas to the film that builds on Eastwood’s stoicism. The combination overpowers, lending each shot, each word, a certain ethereal implied heaviness, a weight that might otherwise not be there were it not for the skill in which Eastwood and Freeman apply their certain manifestations of gray. And all of this finds a home in the story of Maggie Ftizgerald, the driven 31 year old, played by Hillary Swank, determined to become a top female boxer. Swank’s vivaciousness, the zeal with which she plays this part, neatly absorbs the mood of the movie, and when she finally falls you can’t help but feel that in a world with more color it might never have happened.

The story hinges on a plot-twist, one that neatly breaks the film into two quite separate moral stories. While I have chosen not to talk about the second-half here, Randy Shaw’s article, found here and below, (“Oscars Reflect America’s Rightward Shift”), on this year’s Oscar Nominations neatly sums up the film’s moral complications. The first half of the movie presents a woman in a man’s world. Swank’s Maggie nearly begs Frankie to take her on, despite his consistent refusals, due to the fact that he doesn’t “train girls”. Somewhere in the folds of gray there lies a troubled family past and an estranged daughter, though we get no closer to that truth than our protagonist does. That this is a woman’s boxing story is a story in and of itself, but the deftness with which Eastwood blends classic male moments with the very female figure of Swank continues to surprise. Not only does Maggie get to fight but she also succeeds, and succeeds in ways that Eastwood himself may have never been capable.

Nor does the story fall into the trap of relating the life of a woman in a man’s world. If anything, Eastwood must enter into the uncharted realm of the feminine, though never so deep that he seems worried. If we’re to mine the film for anything, we would most likely not strike rich enough intellectual soil to give too much power to the subversive possibilities of Million Dollar Baby. The story has power, the acting wings, and the dialogue (specifically the interactions between Eastwood, Freeman and Swank) have the calm of easy performers and the depth of wizened actors. But in the end, at the heart of all of the gray, Million Dollar Baby stands firmly within the confines of melodrama.

I am not one to disregard melodrama simply on principle. In fact, I find melodrama entirely necessary if not occasionally inspirational (Hotel Rwanda, for instance, often relies on melodrama to carefully shame its audience). But when melodrama drips from a storyline that follows such classic formal guidelines, the repetitiveness, the lack of true complexity, tends to weigh at the emotional seams.

Unlike Hotel Rwanda, where the events and people force you to care about their misery, Million Dollar Baby fails to oblige viewers to open their hearts entirely. Swank and Eastwood certainly try, and to some extent they succeed in telling a good story, even, perhaps, a story with a moral. But their ultimate flaw resides somewhere in the audience’s understanding that this is never anything more than a story, nor are these characters, as well-played as they may be, ever anything more than just that.

Two of the movie’s peripheral characters, Danger and Mardell provide the point and counter-point for this lack of delicate symbolism. Danger’s slightly slow boxer stands for heart-an asset, Mr. Freeman tells us, that is utterly necessary for a boxer. Though, he adds, no boxer ever wins on heart alone. To the equation of heart they must add talent, or sheer force like that of Mardell, though as Mardell proves talent without heart can be equally dangerous. Million Dollar Baby itself, while occasionally long on talent, often seems to fail for heart. It is not that I think the film lacks heart, but instead that the heart gets lost somewhere in the tropes, almost as if we know so well what we are supposed to find that we have a hard time seeing it through the gray.