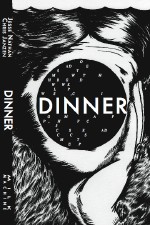 Dinner parties are typically quiet affairs involving tinkling glassware, amicable conversation, and funny anecdotes. Most are sadly lacking in misalliances, confrontations, and kitchen fiascos, and are therefore not something I’d rearrange my schedule for, particularly not if it were several thousand miles from my Michigan doorstep.

But on April 18, a Saturday evening, I am turning onto 8th from Mission with an armload of books to attend the premiere performance of Dinner, in what amounts to a dinner party at Electric Works. As I brush past the sign near the front door that in capital letters announces “no peddlers or actors,” umpteen concerns congest my head: will there be beer? Will I know anyone there? What about my hair? Why am I here?

Lobsters and umbrellas hang from the ironwork on the ceiling, while on the dining area walls are mounted rare and disturbing trophy-heads: a six-eyed bull, a white whale, a two-headed bearskin rug, and what amounts to a decapitated horse’s neck. From the innermost reaches of the kitchen wafts the scent of toasty crostini, of fumy pickled beets. People nibble on crackers topped with sliced chèvre as creamy as hot butter.

Two young men crowd a corner, one standing at the epicenter of a crescent of guitar effects pedals and samplers, the other flanked by a pink typewriter and a clarinet. The first is Chris Janzen, composer of the evening’s musical component and gluer of collages. The second is the poet Jesse Nathan. A table runs the length of the L-shaped gallery, and at each place setting rests the subject of the evening: a chapbook book of poems with the abbreviated title of Dinner.

Authored by Nathan, the chapbook posits a formal mixer hosted by Virginia Woolf and attended by sixteen eccentric historical figures. People the likes of Billie Holiday, Salvador Dalí, and Thelonious Monk stalk the halls, drifting into and out of the glorious rooms of a Frank Lloyd Wright mansion. They get along or they don’t; they think out loud or inside their minds; they mingle or they commiserate or they sneak off to conspire and kiss. As the fictional party progresses, one begins to wonder: will the evening end a success?

Fresno artist, musician, and Fresno Pacific University faculty member Chris Janzen composed and performs the music, which forms the foundation for Nathan’s poetic forays. Janzen also composed the collages that accompany each poem. As people find their seats at the table, he samples a few notes for the first poem-piece, “Small Journey,” a portrait of the gracious host, Virginia Woolf, in the throes of a pre-party panic attack.

The guests all turn to face these two men, and listen – politely at first, then with intent interest – as the Dinner guests begin to arrive. Monk enters with the plunking dots of Janzen’s double bass, the tragic Lady Day on his arm. “Oh, Thelonious,” Woolf swoons, “your music just owns us.” And it’s true; the guests at Electric Works are all ears. Then comes Bobby Fischer with a series of specific accommodation requests. Gradually, one by one, everyone is absorbed.

Then, abruptly – after an unwieldy blessing given by philosopher-activist Simone Weil – the performers put down their instruments and leave the corner stage, and waiters ferry out the first dinner course. Lingering expressions of happy confusion are transformed into bemused glee as the guests are served the very same carrot cabbage salad that, in the poems, had been left largely untouched.

Likewise, as if on cue, the following course is served after three more poems, and this time it’s the orzo minestrone that steamed next to Fischer’s hand as he babbled and schemed with Jaco Pastorius.
And so on and so forth: the guests of the poems, fueled by drug- or God-addled minds (or both), racist manias, obsessive delusions, and strange sympathies, continue to band together and fall apart, their fates intersecting with ours in weirdly anachronistic ways. The night’s performance reminds us of the tragic absence of these people, but also of their presence with us still.

Through the aspic speckled with chessmen, recalling Bobby Fischer, or the bust of Mozart reminding us of pianist Glenn Gould’s distaste for the composer’s oeuvre, the themes of the genius of madness and the art of the faux pas were the focus of the evening.

Being witness to one too many boring readings, I’m pleased that the performance of Dinner was not one of those. With the well-timed dinner courses, the well-rhymed speaking voices, and the marriage of music to word to collage, it would have been barely more interesting had any of the Dinner characters appeared in person. Sometimes frenzied, sometimes sedated, and in a few instances totally monotonous (depending on the character), the reading performance was never in danger of losing anyone’s attention.

This whole ordeal was organized and hosted and brought to the Upper Mission’s own Electric Works gallery by the people of Milk Machine, a San Francisco-based artist collective and publisher of books. It was a one-night only event, although most of the experience (minus the meal and camaraderie) can still be had in book/CD form. The chapbook features reproductions of Janzen’s collages and the poems themselves. The compact disc features a recording of the music-and-reading performance, and is best enjoyed with a glass of absinthe cut with champagne in your hand. Exquisite.

Send an e-mail to milkmachinestore@gmail.com if you’d like to buy a copy of Dinner for $15. Each order includes one chapbook and one compact disc.