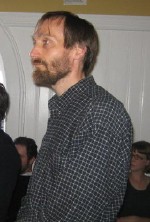 San Francisco tenants lost an instrumental advocate this weekend, when Miguel Wooding – founder and executive director of the Eviction Defense Collaborative – died tragically while vacationing in Mexico with his sister. He was 46 years old. “It’s hard to say who saved more homes for tenants in San Francisco,” wrote activist Gabriel Haaland upon hearing the news. “Miguel, Ted [Gullicksen] or both.”

In January 1996, Miguel brought together a dozen local nonprofits and lawyers’ groups to launch and fund what is now the Eviction Defense Collaborative. Every day, San Francisco tenants who are served eviction papers get critical assistance from the EDC – which helps them file their answers in Court, offers attorney referrals and leverages emergency funds that can keep them housed. EDC is an indispensable service that the City simply cannot do without, and Miguel’s ingenuity and persistence has allowed it to thrive for over 15 years.

“Farewell to a giant,” wrote Tom Drohan at Legal Assistance for the Elderly on his Facebook page. “[Miguel’s] intelligence was only matched by his generosity. His work on behalf of tenants, both at the legislative level and at the direct services level was incredible. He would have been an enormous success at anything he chose, and he chose to give his talents to the tenant community. He will be very missed.”

Originally from upstate New York, Miguel came to the Bay Area to attend college at Stanford University – where he graduated in 1986. Upon moving to the City, he got involved in the housing rights movement by volunteering at the San Francisco Tenants Union. There was an eviction defense office for tenants to file their court papers – but when budget cuts forced the Tenderloin Housing Clinic to close it down, the need for a new organization was apparent. Weekly volunteer-run worskshops at the SF Tenants Union for tenants to bring their unlawful detainers was not enough. Clearly, something had to be done.

Miguel brought together a dozen housing rights organizations to launch the Eviction Defense Collaborative, and in November 1996 they hired their first employee – attorney Carol Bettencourt. “At first, each of the member agencies had someone here to help me get trained,” recalled Bettencourt, “but then everyone else went back to work and only Miguel [who was doing this on a volunteer basis for the Tenants Union] stayed around.”

It was Miguel’s ingenuity that allowed EDC to expand from one paid staff, to two (Carol and Miguel) to the 16 employees it has today. From helping tenants answer an unlawful detainer within five days (so that they wouldn’t lose their eviction by default), Miguel leveraged grant money and government funds so that EDC could offer rental assistance. The RADCO program, where EDC provides loans to tenants who are in danger of losing their homes by offering them emergency funds, happened because of Miguel’s efforts.

Before EDC expanded to include a larger staff, it was also indispensable that Miguel was fluent in three languages – English, Spanish and Mandarin (having lived in China.) And while he was hired full-time to be the EDC’s Executive Director, he still continued to volunteer at the SF Tenants Union for years – doing counseling on Wednesday nights.

“Miguel was not a lawyer,” explained Bettencourt, “but most people who didn’t know him always assumed that he was. He knew more about San Francisco tenant law than any other attorney, and he was just so smart to bounce ideas around.”

Others in the tenant movement could attest to Miguel’s good-natured spirit, warm personality and his willingness to mentor and train others. Sara Shortt, Executive Director of the Housing Rights Committee, had this to say about Miguel yesterday:

I was awash in gratitude a few week back, as I sat in Miguel’s office while he so generously took his time to guide me through some financial stuff that he was so brilliant at. I laughed at his geek-itude and his joy at working the keyboard and making the numbers add up. But, I left absolutely amazed at how talented and big-brained he was and how lucky we were to have him give all of that to the community.

He could talk legal concepts like an attorney, draft legislation, work numbers in his head as if by magic, speak Cantonese fluently, give eloquent testimony at hearings, have statistics and figures at his fingertips, run an organization and still volunteer at another … and yet he was also there marching with his picket sign when direct action was what was needed and putting his body on the line for the movement. He was at once the biggest of wonks and the most committed of street fighters.

“Miguel was only as important to this City as your home is to you,” said Bettencourt, “because he helped preserve homes for so many, and the institutions he supported and helped build will continue to do so for years to come.”

After a funeral in New York for his family, Miguel’s ashes will be brought to San Francisco for a more public memorial service. Please stay tuned, as we become apprised of further details …