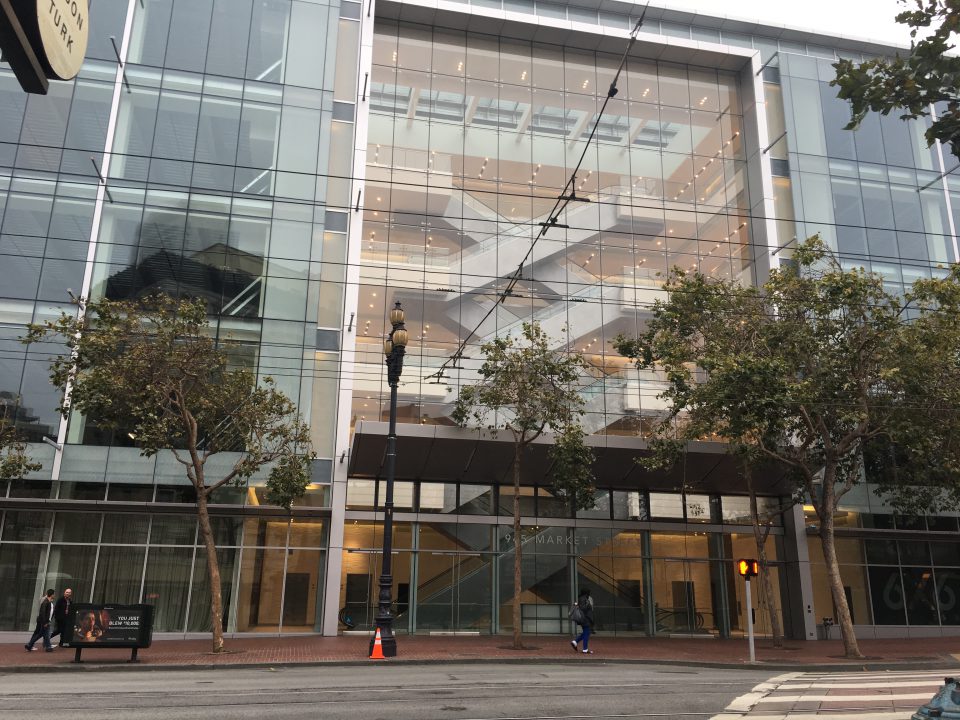 People often scream “build it and they will come” when talking about luring tenants to new developments. But for the brand-new shopping center said to be a catalyst for revitalizing Mid-Market – somebody built it, but nobody came.

6×6, originally named CityPlace, is a 6-story shopping center located on Market Street between 5th and 6th streets. It’s the giant empty glass building across the street from the Crazy Horse strip club, nestled just past the Westfield mall on the stretch of Market Street some would say is pretty sketchy.

CityPlace was approved in 2010, before Twitter and when there was little hope for Mid-Market revitalization. At the time, Beyond Chron was among those who felt the new shopping mall would be a game changer.

But progress stopped when the original developer lost financing. Groundbreaking did not occur until November 2014, when hopes were again high for the project’s success.

While 6×6 waits in limbo for its opening day, Beyond Chron went out to Market Street to ask residents and employees of neighboring buildings what they want to see open in the new shopping center.

While answers varied from more retail to a free clinic, one consistent theme emerged — regular San Franciscans want something affordable.

Naseem Khan, assistant manager at Shiekh Footwear next door to 6×6, lives in the Tenderloin on Turk and Larkin streets. As somebody who lives and works in the neighborhood, Khan hopes to see something next door she can afford. She said anything from affordable retail to moderately-priced food options would do the trick.

“For me, working here, I can’t afford to go to the Gucci store or Louis Vuitton or Saks Fifth Avenue next door,” she said. She wants something neighborhood people can use. Something they can afford. Her suggestions include cheaper food options for retail workers who need somewhere to eat during lunch.

On the other side of 6×6, a neighbor who lives in the apartments next door echoed Khan’s wishes.

Jamie, who would not give his last name, has called the Wilson Building Apartments home for two and a half years. He’s a Vietnam veteran who lives on a fixed income in one of his building’s below market-rate units. While watching 6×6 get built, he’s seen much of the process from his bird’s-eye vantage point next door.

According to Jamie, Safeway was in negotiations to open in the mall, but the deal fell through. Reports were that Safeway wanted the ground floor whereas the owners wanted the grocery in the basement.

Jamie hopes Safeway returns to the bargaining table because he says the neighborhood desperately needs a grocery store, especially one that’s semi-affordable. “We need a grocery store on this end, right now you need to go all the way down to Church Street, or Fillmore…or the Smart and Final all way out there,” he continued. “The tenants here would love it because we have 67 units and most people get their groceries delivered.”

While Jamie said Safeway is rather unaffordable itself, he would compromise in the event it opened up next door, allowing him to buy groceries closer to home.

A couple buildings down from Jamie’s apartment building is Blick Art Materials, a popular art store near the 6th street corner. Dave Hahn is the general manager of the art store and walks to work every day from his apartment on Geary and Jones streets. While Hahn has only been employed there for a couple weeks, he has strong feelings about the neighborhood and what it needs.

“Something besides a titty bar or another headshop would be nice,” he said. “Affordable housing would be nice too.”

Hahn thinks the immediate neighborhood should benefit from whatever opens in 6×6. “It would be nice to see something that supports the Tenderloin and Civic Center neighborhoods…a free-clinic would be cool,” he said.

But the leasing agency responsible for negotiating leases with prospective tenants is keeping its cards close to its chest.

Vikki Johnson, Senior Managing Director at Cushman & Wakefield, says the shopping center is “geared towards large format retail” with its large floor plans. She said her company is in ongoing talks with multiple retail outfits to fill the many open spaces.

She wouldn’t comment on who the potential tenants were or what kinds of businesses they engaged in due to, what she said were, potential conflicts of interest.

Other representatives of Cushman & Wakefield did respond to multiple requests for comment.

While San Franciscans waits to see what kind of vibe emerges from the many directions 6×6 can go with its retail choices, one thing is certain – people in the neighborhood want something they can afford, not more bourgeoisie retail options geared towards tourists and wealthier office workers.

That’s exactly what original developer David Rhodes had planned for the project. He saw JC Penney’s, Ross or a similar retailer as the perfect anchor tenant. Now, the retail industry has changed, putting such mid-price clothing companies at risk.

What happens with 6 X 6 could be a sign of the future of new shopping malls in urban centers.