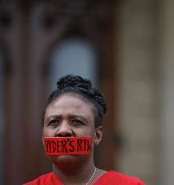 In case you missed it, Michigan—the birthplace of the United Auto Workers—became last week the 24th state in the nation to pass “Right-to-Work” legislation. “Right-to-Work” is newspeak for union-busting, since under these laws a workplace cannot make the payment of union dues or fees a condition of employment. (Unions will still be required to represent all workers within a unionized bargaining unit, whether or not any individual worker contributes, so it’s more of a “Right-to-Freeload”). John Logan, in Beyond Chron, has outlined the poverty of the theory behind these sorts of laws. Michigan will not grow stronger economically. The only likely result is that unions in the state will grow weaker, and that fewer Michigan workers will be able to benefit from collective bargaining.

There are many good reasons to support unions. If we care about economic justice, then we must care about unions. It is widely acknowledged that workers in unions earn about twenty percent more than their non-union counterparts, and are almost thirty percent more likely to have health benefits. According to recent research by Bruce Western and Jake Rosenfeld (and summarized in a report by the Economic Policy Institute), declines in union membership help to explain a goodly share of rising economic inequality.

If we care about workplace dignity, then we must care about unions. Absent union membership, employees have little in the way of workplace protections. The First Amendment does not apply to them, and they can be fired without due process. Without unions, workers have no guarantee of having real voice over the conditions of their employment. We may live in a democracy, but without unions we work in dictatorships of varying degrees of benevolence.

The Michigan legislation thus presents a clear and present danger to the 18.3 percent of Michigan workers still covered by collective bargaining agreements as of 2011.

Less obvious, but just as pressing, are the ways in which this legislation jeopardizes the safety and well being of everyone in the state.

While Walter Reuther is certainly turning in his grave, autoworkers are not the only—or even the primary—group of workers that will suffer under the new laws. Despite the state’s history, manufacturing no longer dominates the state’s economy nor its labor movement. The healthcare industry is now the state’s largest employer. And the public sector (teachers, police officers, etc.) in Michigan is the most heavily unionized sector by a landslide (55.5 percent compared to 20.4 percent in private manufacturing).

The future of the labor movement in Michigan (and around the country) thus has important implications for nurses, orderlies, teachers, and fire fighters. These are the workers who are teaching our kids, who are taking care of our parents and our friends. They are teaching us to read; checking us for bedsores; helping us overcome our fear and uncertainty; keeping us and our families safe.

And their interests are our interests. When nurses advocate for lower staffing ratios that allow them to nurse in the ways they know how, we all benefit—emotionally and medically. Research by Michael Ash and Jean Ann Seago has shown that nurse unionization is related to lower heart-attack mortality. When teachers push for class sizes that allow them time with individual students, our children get a better education.

Last Monday, on the steps of the state capitol, Michigan nurses took part in a moving, if understated, protest against the impending legislation. They stood silently, red tape over their mouths, suggesting how “Right-to-Work” will eliminate their right to speak. But it is not only their voices that will be silenced. When these workers are silenced, we are silenced. As workers fight together to protect their dignity, they are protecting our dignity as well.