Memo to Michael Moore and Matt Taibbi: Capitalism Rules, Like it or Not 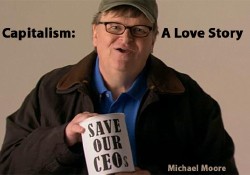 Once upon a time, savvy, seniority-laden politicians – buttressed by top scientists, artists, and clergymen like Rev. King – battled the forces of darkness. Imagine, dozens in Congress taking on bad wars like Vietnam or regressive tax policy, pushing strong banking regulations, the EPA to protect endangered species – all the while advancing civil, women’s, workers’ and voting rights. But that time is over: capitalism’s most visible “critics,” like the President, are not serious, fiercely independent reformers – but corporate-friendly insiders trying to retune the engine.

Take Taibbi of Rolling Stone, who exposes grievous, but often extraordinary cases, then applies his cherry-picked findings rather broadly. The result is tarring the innocent with the guilty: few companies know a hedge-fund from a hedge hog or a derivative from a standard deviation. In discussing rogue stock traders, Taibbi distorts suspect trading as prime causes of the ’08 meltdown, linking them with the super-rich, “We’re in a place we haven’t been since the Depression: Our economy is so completely fucked, the rich are running out of things to steal.” Of all people, Taibbi should know tycoons benefit from disaster, corralling beaten down stocks after busts.

A Non-politician vs. a Master?

We need someone who will run on one very basic principle — the refusal to accept corporate money. That someone will have to be willing to be a symbol of voter empowerment. If someone like Elizabeth Warren doesn’t want that responsibility, well, she shouldn’t have gone into office and gone on TV making all that sense and shit . . . Because really, what’s the alternative? How can we keep voting for these guys, when they never, ever deliver?

This is stunt blogging, knocking Democratic heads with a 2X4, not serious politics: why else elevate a non-politician defined solely by what she won’t do: take corporate cash? If there’s no “alternative” because Democrats “never, ever deliver,” how would the same party’s “President Warren” outperform our skilled politician-president? Stick to muck-raking, Matt, not picking “symbolic” fights. Yes, progressives must increase leverage but not with slippery fictions: 1) only one leader can “give power” to people, 2) today’s left needs more “symbols” of reform, and 3) if only the party had better leaders.

Taibbi rants magnificently, but he’s no master strategist (nor should he be). Instead, let’s return for political mentoring to our famed anti-Capitalist, citing “Michael Moore’s Action Plan: 15 Things Every American Can Do Right Now.” The Michigan jester begins with a few modest demands:

1. Declare a moratorium on all home evictions; plus, if you lose your job, you cannot be tossed out of your home.

2. Congress must join the civilized world and expand Medicare For All Americans.

4. Save this fragile planet and declare that all the energy resources above and beneath the ground are owned collectively by all of us. Just like they do it in Sarah Palin’s socialist Alaska.

Moore’s tactics are as scattered as his demands are epic: make angry phone calls; remake your local Democratic Party; find progressive candidates or, better still, run yourself; picket banks that took bailout money; and start your own media (yep, we online scribblers are saving the world). In the meantime, Moore wants us to punish bailed out banks by removing savings, dump all credit cards but one, clear our mortgages, boycott the stock market, unionize, wait out “this mess” by finding a safe, family oasis, “eat (real) food, not too much, mostly plants,” get good sleep, and read more.”

But no amount of phone calling will turn Obama into FDR or an anti-war hero. Both Taibbi and Moore depreciate how incredibly rare are great politicians, how tough the business; amateur primary challengers scare no one, indeed re-elect fatcats. Few succeed beyond local politics: wielding national power demands presence, knowledge, communication skills, money, a fanatic base, strong ideas, and seniority. Look at Sarah Palin, brimming with eros, aura and fanatics galore, even money, but right now, unelectable.

Muckraking and satire are about outrage, drama and exposure, not fixing. They are prone to exaggeration for effect – like presenting only sham TV “wrestling” as if trumping the honorable collegiate and Olympic versions. When Moore grandstands, declaring capitalism “evil,” the mere “legalization of greed,” he lowers liberal credibility. Are like abstractions, money or power, faith or religion, not just as evil because each is corruptible? Likewise, Taibbi undercuts terrific work with stereotypic bashing of all high achievers as predatory thieves, on the prowl for the next scam. Reforming bad capitalism will be tough, but we must begin by understanding the protean nature of the beast, not sensing danger, shooting arrows in the air and hoping for the best.

Note: this is part one; on the docket, a defense of “good capitalism” because that’s all we got; in short, why “Capitalism R Us” (and increasingly, billions abroad).