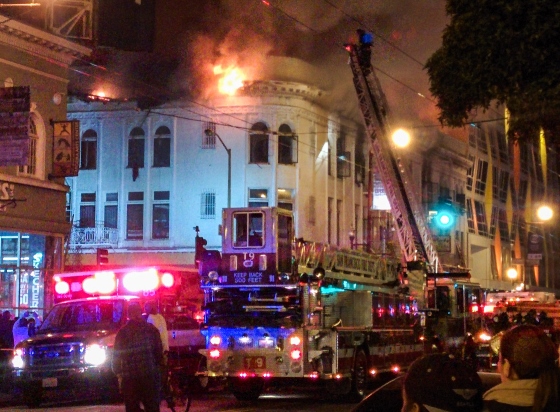 The recent fire at 22nd and Mission Streets should have been a game-changer. It should have created a public groundswell for improvements in fire department inspection practices. It also should have led to front-page editorials demanding apartment sprinkler laws to prevent future fires.

But the San Francisco media was not interested in using this disaster to prevent similar ones in the future. To the contrary, the media gave the SF Fire Department a pass. It also confused the public by not highlighting that only sprinklers, not fire alarms, smoke detectors, or fire exits, put out fires.

Consider the SF Chronicle’s Sunday, February 15 story, “Years of safety violations cited at Mission site of deadly blaze.” The story notes that “the building passed its last inspection in August, but that was apparently because of sloppy documentation by the Fire Department, officials said.”

Who caused this “sloppy documentation” and who is being held accountable for it? The Chronicle doesn’t say. Nor are we told who in the SFFD is to blame for this: “a door leading to a roof escape was padlocked in violation of the fire code, and fire officials knew about if for three years.”

What officials? The Chronicle does not say. Nobody at the SFFD is held accountable for doing nothing to correct these potentially life threatening fire code violations.

While giving the SFFD a pass on fire code violations endangering tenants,  the  Chronicle and other local media recently made Supervisor London Breed’s attacks on Fire Chief White a front page story.  Yet Breed’s complaints were nowhere near as serious as the type of inspection failures cited by the Chronicle over the Mission fire.

The Chronicle even found that the SFFD “acknowledged that their inspectors have been lax in documenting whether building owners repair violations. Such practices — and the lack of fire alarms and sprinklers — raise serious questions about San Francisco’s ability to monitor and enforce fire safety in large, old apartment buildings.”

Well, these questions apparently are not “serious” enough for the paper to demand immediate changes at the SFFD. The Chief has not even been asked to defend the SFFD’s failure to protect tenants.

Overall, the media held nobody specifically to blame for lax enforcement and pushed no specific solutions to prevent future apartment fires.

Remarkably, the Chronicle allowed the SFFD to blame “overworked fire inspectors” for the fact that  fire hazards at the premises dating back to 2009 were not corrected. The truth is that the SFFD has long lacked effective fire code enforcement procedures necessary to ensure life-threatening violations get abated.

Such procedures provide specific deadlines for reinspections of outstanding code violations. Owner inaction quickly leads to a Director’s Hearing, and referral to the City Attorney’s Office, which files a lawsuit against the owner for damages and a court order requiring repairs be made

Having seen the Chronicle unfairly attack the Department of Building Inspection for years—an agency whose housing code procedures are a national model— I know that if DBI were to blame for these lax fire inspections the paper would have demanded firings. But when it comes to tenant safety and the SFFD, it’s a different story.

The media can play an enormous role in protecting tenants. In 1982, the Chronicle put the story of heatless SRO hotels on its front page for five straight days. Crusading reporter Warren Hinckle and the Chronicle Editorial Board kept so much pressure on that they forced the city to adopt tough new heat and hot water laws, which were passed as emergency legislation.

I describe the media’s heroic response to heatless SRO hotels in The Activist’s Handbook. Such reporting is sadly missing around apartment fires today.

In those days, instead of simply writing sympathetic stories on tenants living without heat and deploring a failed heat inspection system, the media pushed for systemic reforms that helped solve the problem.In contrast, readers of stories about the Mission fire could mistakenly conclude that the lack of fire alarms, working smoke detectors, and effective fire escapes would have prevented the displacement of 59 tenants and multiple businesses.

Only sprinklers put out fires. And as I detailed on February 2, if the city wants to stop tenant and business displacement due to fires, San Francisco needs an apartment sprinkler law.

San Francisco passed a soft-story seismic law despite a lack of tenant displacement from past earthquake damage to such structures. Yet the city continues to put tenants and small businesses at risk by not requiring any sprinklers in apartments.

How many more tenants must lose their homes before the city acts? Or before the media rises up to demand such action?