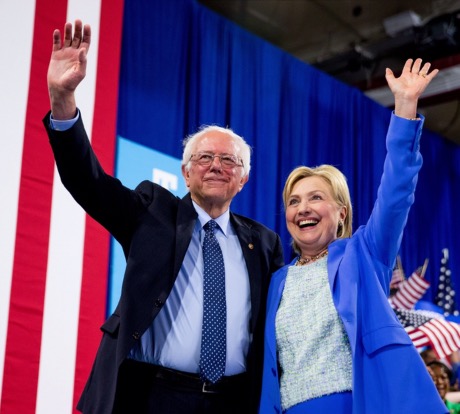 Bernie Sanders gave a rousing endorsement of Hillary Clinton on Monday night, but it won’t stop reporters from clinging to a false narrative of Democratic disunity.  The media’s pre-convention stories were dominated by the disunity story line,  and there are enough Sanders supporters booing every mention of Hillary Clinton’s name to sustain it.

The media’s problem is that it confuses unity with unanimity.

This means that despite Sanders’ national speech and promotion of Clinton,  the media sees the existence of a small group of Sanders backers who refuse to  back Clinton as evidence of Democratic disunity. They reach this conclusion without even exploring whether the Sanders delegates booing Clinton were even Democrats prior to 2016, or have any longterm commitment to the Democratic Party.

It’s the same exaggeration of dissent that the media made at the GOP Convention following Ted Cruz’s refusal to endorse Donald Trump. Post-election polls showed that contrary to media claims, the convention did solidify GOP support for Trump.

The problem is reporters reliance on preexisting narratives. That’s why when something unexpected occurs—-such as Melania Trump’s allegedly plagiarized speech—the 15,000 credentialed media entirely missed the story. It took laid off journalist Jarrett Hill watching the proceedings at Starbucks to recognize the similarity between Michelle Obama’s 2008 speech and Trump’s 2016 address.

Reporters missed the story because it did not fit into their pre-existing narrative for the Republican Convention, which was  to highlight Party disunity. This story line was fueled by the absence from the event of both former president Bush’s and the last two GOP presidential nominees;  Ted Cruz then kept it going.

Here are the pillars of the media’s false “Democratic Disunity” agenda:

Like many, I thought Elizabeth Warren would be a more strategic VP choice. But the media has grossly distorted progressive opposition to Kaine, ignoring his support from AFSCME and people like former Communication Workers of America leader Larry Cohen, who led the labor campaign for Sanders.

I talked to Kaine at a small private party in the Mission last November about his being Clinton’s choice as opposed to Warren. He told me that he did not consider himself competing for the VP slot with Warren, Sherrod Brown or anyone else, because he brought different strengths.

In reviewing the less known parts of Kaine’s record, he has long focused on Virginia’s housing and homelessness crisis, making him among the few national politicians with that background. Much of his 18 year legal career was devoted to fair housing. He is also a “bit of a crusader against sprawl,” and promoted open space acquisition when Governor of Virginia.

That people preferred Warren to Kaine does not support a claim of “Democratic disunity.” But some in the media are so committed to this narrative that no testimonies on Kaine’s behalf from prominent progressives and even Sanders supporters can change it.

Debbie Wasserman Schultz was on her way out as head of the Democratic National Committee before resigning yesterday over emails that showed she backed Clinton over Sanders. But the media saw an opportunity to fit the emails into their “Democratic disunity” narrative, using it as an opportunity to again highlight that some Sanders supporters saw the primary process as “rigged” and still oppose Clinton’s candidacy.

I doubt that the vast majority of voters even know who headed the DNC prior to Debbie Wasserman Schultz’s resignation. This is a classic insider politics issue that many reporters love because it requires no work or thinking to create. Few if any voters are switching from Clinton to Trump because of anything Schultz did at the DNC.

On Monday, some Sanders delegates booed Bernie Sanders at a private meeting when he urged them to back the Clinton-Kaine ticket. Some also booed Clinton’s name whenever it was mentioned from the convention podium, ignoring Sanders’ own plea that they stop.

Others put tape over their mouths saying “Silenced by the DNC.” Sarah Silverman, a huge Sanders supporter, told the “Bernie or Bust” folks booing pro-Clinton comments that “You’re being ridiculous.”

But despite Silverman’s directive, and the estimated only thirty Sanders delegates doing the booing (all from California), the media continued to promote a false narrative of “Democratic disunity.”

The Washington Post reported on Monday that 90% of Sanders voters were backing Clinton. So the opposition from Sanders delegates is both atypical of Sanders supporters and miniscule.

At the 2008 Democratic Convention in Denver I saw a lot of people wearing so many huge Hillary buttons that one would think Clinton and not Barack Obama is the nominee. The media exaggerated the “Democratic disunity” narrative at that convention as well, as the November election results proved.

Both Parties are Unified

When the Democratic Convention ends Thursday night, even media promoting a false “Democratic disunity” storyline will likely conclude that unity has been achieved. The media will assess the convention by its success in building Democratic unity behind the Clinton-Kaine team.

And notwithstanding Cruz’s non-endorsement and opposition to Trump from high-profile conservative journalists, Republicans are also overwhelmingly unified. The vast majority of Republicans will back Trump in November, because as the same media promoting the disunity narrative has also pointed out, Trump reflects the core views of the Republican base.

For all the polls showing that Trump and Clinton are unpopular, they got millions more votes than their opponents. Both are far more popular than recognized.

After all of the complaining and internal battles, 2016 will be a presidential election that will be a true plebiscite on which party’s core views best represents the majority of American voters. That’s why the stakes are so high, and voter turnout records will be broken.

Randy Shaw is Editor of Beyond Chron. He is the author of The Tenderloin: Sex, Crime and Resistance in the Heart of San Francisco,