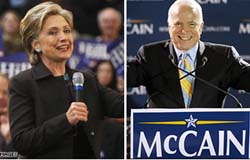 “The difference between a politician and a statesman is that the former only looks at the next election, while the latter focuses on the next generation.”
— Hillary Clinton in Nashville, January 26, 2008

Senator John McCain’s victory in yesterday’s Florida primary has two immediate impacts. First, it makes McCain the Republican frontrunner and almost certain presidential nominee. Second, McCain’s candidacy undermines Hillary Clinton’s argument that she is more “electable” due to her experience, national security credentials, and ability to serve effectively as President on “day one” — after all, McCain beats or matches her in all three of these areas. Voters say they want change, but are unlikely to see Clinton as a greater agent of change in light of McCain’s maverick image and the perception that he is less tied to the Washington Establishment. And both McCain and Clinton supported the Iraq War. Many are already arguing that a McCain-Clinton battle is the Republican’s dream match-up, and their only viable route to winning the White House.

Mitt Romney gave it his best shot in Florida, but 2008 appears to be John McCain’s year. And to the amazement of many who thought the Democratic nomination battle was akin to winning the White House, McCain is seen as potentially winning in the fall if he gets the chance to run against Hillary Clinton.

The scenario leading McCain to the White House is hardly farfetched.

After a bruising Democratic primary, Hillary Clinton uses “super delegates” — a fancy name for the Democratic political establishment — to secure the nomination. The many young people and independents brought into the political process by Barack Obama then bolt, and the Party leaves its convention unified on the surface but in a state of inner turmoil.

As framed by the McCain campaign, he, not Hillary Clinton, is the candidate of change. Despite McCain’s support for the Bush agenda, he has enough currency as a “maverick” to retool his “Straight Talk” image for the general election.

Hillary Clinton cannot play her “experience” card against McCain. Nor does her “national security” card have value when she joined McCain in backing the Iraq War and rose from her seat to applaud the surge at President Bush’s State of the Union address this week.

Although Clinton’s views on a range of issues are dramatically more progressive than McCain’s, if this election is designed to answer the nation’s hunger for “change,” she does not satisfy it. As crazy as it sounds given his often right-wing politics, change-obsessed voters could prefer a “maverick” over a quintessential “insider” who lived in the White House through the 1990’s.

A McCain-Clinton race will hardly keep people in a froth of excitement. And rather than being seen as a presidential contest that charts a new beginning, this election will tell the world that Americans feared launching a new direction, and instead retreated to the past.

With a week to go before Super Tuesday, one wonders whether undecided voters will reconsider Clinton and Obama’s respective “electability” in light of John McCain’s new status.

Update on impact of John Edwards leaving the race today: pundits will have a field day analyzing this, but my two sentence opinion is that there is no way Edwards drops out before Super Tuesday if he thinks it would help Hillary Clinton. And while Edwards’ departure will help Clinton in some states, it clearly helps Obama in delegate-rich California.