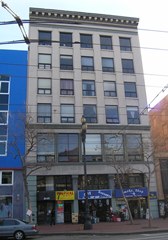 Something unprecedented happened in San Francisco last week: the mayor, district supervisor, and top building official formulated a powerful strategy to stop the eviction of nearly 100 tenants at 1049 Market Street. This strategy, which uses the DBI Director’s charter-mandated power to modify strict compliance with code provisions (a power also granted to certain DBI committees), also provides a template for avoiding evictions of residential tenants in nearby commercial buildings as well.

DBI Director Tom Hui and his staff deserve enormous credit for figuring out how to feasibly sustain residential occupancies at 1049 Market. DBI’s prompt response to the risk of tenant displacement came at the request of Mayor Lee and District 6 Supervisor Jane Kim, both of whose staffs jumped into action when they learned of the evictions from tenant groups. Since owner John Gall claims that he was only evicting tenants because DBI was “forcing him,” (which DBI denies), Hui’s action clearly eliminates this concern. The concerted action by Lee, Kim and Hui for preserving residential uses in commercial buildings is a win-win strategy for all parties at 1049 Market and for all who care about the future of Mid-Market.

If you read the October 12, 2013 San Francisco Chronicle story, “Mid-Market artists facing eviction,” you should know that the headline got the story completely wrong. While residents of 1049 Market technically face eviction, the real news is that their chances of avoiding eviction have increased dramatically due to actions by city officials last week.

1049 Market Street (between 6th and 7th Streets) is among a number of historic office buildings in Mid-Market long used for residential occupancy. Owners could make more money on residential tenancies, which allowed them to avoid the costly upgrades necessary for modern office needs.

That’s why the historic Wilson Building at 973 Market—-a true architectural gem—is currently being converted from offices to condos. The owner of the now vacant Grant Building at 1095 Market, another historic office building, also wants to change its office use; it is up for sale and potential buyers are said to be considering conversion to a tourist hotel.

The Mid-Market office spaces occupied by Dolby, Twitter, and Square (whose 1455 Market at 11th space is not really “mid” Market) are either in modern buildings or very large structures that have been completely redone. The smaller office buildings like 1049 and 1007 Market are not going to attract Class A office tenants, which is why owners have long preferred residential tenancies.

Contrary to owner Gall’s claims, the Department of Building Inspection has never pushed him or any prior owner to evict the tenants of 1049 Market. In fact, since DBI and its public commission was created through a 1994 ballot initiative that I authored (Prop G), it has not pushed for the eviction of any tenants (a sharp break from its predecessor Bureau of Building Inspection, which prioritized closing down in-law apartments).

That’s why DBI did not follow up on its 2007 Notice of Violation for 1049 Market Street. DBI officials understand the city’s housing shortage and do whatever they can to keep tenants in their homes.

Instead, the eviction threat at 1049 Market was driven by the owner’s desire to undertake an ambitious plan to legally convert the commercial property to residential use. The reason he hit what he describes as a “brick wall” with the city is that he was treating the project as if the building were vacant; in that case, DBI would require full compliance with the strict requirements of the code.

Rather than work collaboratively with city officials and tenant groups to address life safety issues that require correction, the owner rushed to issue eviction notices to tenants while wrongly blaming DBI. Fortunately, the tenants had sought assistance from the Housing Rights Committee of San Francisco, who in turn got Supervisor Jane Kim’s office involved.

Kim is committed to preventing Mid-Market displacement, and quickly got Mayor Lee’s office and new DBI Director Tom Hui involved. Hui, in his first full week on the job as permanent director after being interim, made it clear from the start that DBI had never told the owner to evict the tenants.

Hui has broad discretion to modify strict requirements so long as life safety violations are satisfied. He and his staff concluded that the owner’s ambitious and costly residential conversion plan was not necessary to legalize the existing units; a far less costly and doable plan would achieve this goal.

As a result, the owner can fulfill his stated goal of maintaining the building as residential. The money he spends on the capital improvements necessary to upgrade the electrical and fire suppression systems can be passed through to tenants under the city’s rent law. After buying an office building that he knew was housing residential tenants, owner Gall will find himself with a highly profitable residential building in a reviving area—at a fraction of the cost of a full scale residential or office conversion.

The owner ‘s eviction notice relies on Section 37.9(a)(10), removal from housing use. This provision is designed for units that cannot be legalized. Based on my experience, there is little to no chance that a jury will rule that a landlord can evict under this provision when a housing unit can feasibly be legalized.

The owner can still evict all the tenants at 1049 Market under the state Ellis Act. But he faces a very different factual situation than the typical Ellis eviction, which enables rental units to be sold without renovations to the housing unit.

In this case, the only reason for an Ellis eviction would be to convert to offices, which the owner claims he does not want to do. If he changes his mind, he will need many building permits to achieve an office conversion. The tenants of 1049 and/or tenant groups will challenge each of these permits at the Board of Appeal. Considering Mayor Lee’s extremely strong opposition to evicting tenants at 1049 Market, and the large crowd likely to speak against the permits’ issuance, the chances that the Board of Appeal denies these permits are quite good.

That would leave owner Gall with a vacant building, fulfilling the original intent of what Ellis Act evictions were supposed to achieve.

I’ve met my share of economically self-destructive landlords, but Gall does not seem to fit this bill. DBI has given him a chance to make plenty of money as a residential landlord in Mid-Market, and any smart business person would jump at the chance.

We haven’t had a lot of happy endings to evictions in San Francisco in recent months, but thanks to Mayor Lee, Supervisor Kim and DBI Director Hui, 1049 Market can prove an exception. And with Gall owning buildings in similar circumstances nearby, there is no reason to think that the 1049 Market solution cannot serve as a precedent to keep residential tenants in place in those buildings as well.