Matt Gonzalez On His Political Future 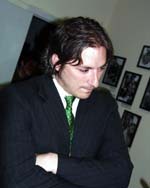 (Ed note: As a June 2 convention looms for progressives to select a candidate to oppose Mayor Newsom in November, Matt Gonzalez was interviewed about the Mayor’s race this week by David Sloane, a Green Party member originally from Australia.)

Q: Matt, thank you for your time. My first question, and I am sure this is everyone’s question, are you running against Newsom?

A: I think I’m doing exactly what I said I would do — beginning about 6 or 7 months ago. I said I thought someone should run against Newsom and initiate a public dialogue about the failings of his Administration.

But since I’m doing something else right now, building a progressive law practice, I did not then — and still in a way — do not believe this is an ideal time for me to enter another Mayor’s race.

I said very clearly though, that I felt strongly enough that there should be a contested race. And that if no other viable candidate emerged to challenge Newsom, I would consider doing so.

Let me emphasize. I did not – nor do I want to – discourage anyone from entering this race. I have never believed that a rematch, so to speak, is ideal. And as a result I have, fairly openly, encouraged others to enter the contest.

Q: So how are you going to handle this? From all the blogs I’ve been reading and from people I hear talking about it on the street, you are the only viable candidate. What do you say to that?

A: I don’t agree with that. There are other candidates who are viable. They simply are more risk averse than I am.

The difference is I am less inclined to believe in Newsom’s invincibility. Do you remember how strong Newsom was 4 years ago? When I first got in the race I was at 6% in the polls and look how close we came to winning. So I’m not put off by his popularity or spin machine. I think many others are scared to take on the challenge right now and would rather wait 4 years when there is an open seat.

Also, keep in mind that whoever gets into this race will have to grapple with how we unite what can often be disparate parts of our progressive coalition. That’s not always such an easy thing to do and looks particularly hard to do right now.

Q: How serious are you taking this? What will your process be like?

A: I’ve met with folks who worked on the last campaign and with a serious campaign manager based out of Washington D.C., who has won over 50 campaigns including numerous big city mayors races and congressional races, who is interested in working on this race. I am starting to explore what others think and whether there is a consensus on how we would do this.

But my process will not be completed in a week’s time. We need to gather research and make overtures to the neighborhoods we couldn’t win 4 years ago.

I’m very eager to hear from voters who voted for Newsom 4 years ago. In fact, I’ve attended a house party in West of Twin Peaks, a neighborhood I lost 4 years ago, and talked with regular voters about what they are thinking. I’ve been quite impressed with what I’ve learned.

And let me emphasize that at this gathering I raised and discussed the viability of other potential challengers.

Q: Do you plan on seeking the nomination at the progressive convention on June 2?

A: I’ve communicated to Chris Daly that I do not wish to be considered a candidate at the convention at this time. I also made clear that I’d be glad to attend and speak if folks there want that.

But candidly, if I have a chance to address the gathering I will be arguing for why former Mayor Art Agnos is my preferred candidate. In many respects he is a perfect contrast to Newsom.

He has the maturity and experience that, I think, voters want right now. Newsom and I were both in grade school when Agnos was first elected to the California State Assembly.

Q: If the convention nominates another candidate, like Ross Mirkarimi, Aaron Peskin, or Daly, what will you do?

A: First off, let me just say, that I only think candidates prepared to get into the race that day should be considered at the convention. As I’ve already indicated, I am not in that category.

If the convention is truly what it is billed as, a representative gathering of grassroots activists and organizations, I would support the candidate they selected.

Q: I understand that you met with Peskin, Mirkarimi, and Daly this past weekend to discuss the convention and work out some of these nuances, is that true?

A: No, I did not attend any such gathering and cannot speak for the others.

Q: How much time do we really have to start a campaign? Don’t you sympathize with Supervisor Daly’s concern? Shouldn’t someone be in this race by June?

A: Of course I sympathize with Chris. Coming off his re-election victory I think many see him as the leader of the progressives in San Francisco right now. So I appreciate that he’s taken on the responsibility of making sure a candidate is fielded to oppose Newsom.

But let me try to place my thoughts on this in context. Although I entered the last mayor’s race in August on the last day to file, I campaigned hard for over 3 months before a 5-week runoff. My race was primarily a race to determine who would face Newsom in a run off. It was basically between Tom Ammiano, Angela Alioto, and myself.

This time the candidate that emerges or enters the race is in effect entering a two-person contest. They are in the run-off. But instead of a 5-week race, they have more than 12 weeks to work with. And that is assuming an entry in August. July would make 16 weeks to do what I tried to do in 5 weeks.

I think there is plenty of time. The anxiety in the progressive community to field a candidate is being fueled by folks who are focused on the fact that Rank Choice Voting eliminates a runoff and therefore gives us one less month to work with.

I think this analysis misses the two-person component of this race.

Q: Did you get in the race too late last time?

A: No I don’t think so. Folks forget that the Governor’s recall election was dominating the press. And that led to something of a black-out of the local mayor’s race. That’s not happening this time.

Because I didn’t win, everyone looks to reasons and my entry on the last day to file is a pretty easy one to point to. But the truth is that most people only remember the frantic excitement of the runoff. They forgot that there was a lot of dead time between August and November when we were trying to get voters interested in the race, but couldn’t because the election was so far off.

I can cite many other equally compelling reasons for why we fell short last time. For instance, if the Department of Elections hadn’t misinformed us of when they were sending out absentee ballots — they told us a week later than what they actually did — the race would have turned out differently, I think.

Nevertheless, I received 119,000 votes, a vote total which has only ever been exceeded twice in a mayor’s race in this city.

Q: How have you enjoyed being in private life?

A: Well, it’s been very good to me. It’s made me think that instead of term limits, we ought to make elected officials leave public office for a while before they can seek successive terms. Maybe after two terms, make them spend one out.

It’s good for reflection. Lets you see things with fresh eyes, and allows you to truly identify with the frustrations regular citizens have with governmental bureaucracies.

Q: You’ve remained very active for a “former” elected official. Can you mention some of the things you’ve been up to?

A: Politically speaking, I continue to host fundraisers and encourage good candidates to run for public office. Jane Kim and John Rizzo are two I’m proud to have helped. I actually walked a couple precincts for Jane. My law firm has hosted parties for Aimee Alison who ran for city council in Oakland, and for the successful IRV measure in Oakland. We hosted that one with Nirvana’s bass player Krist Novoselic and Steve Hill. I’ve also been involved as an advisor to Green Party Mayor of Richmond whenever she needs a second opinion.

I visited 8 different cities with Ralph Nader on an anti-war tour after I left the Board of Supervisors, I guest hosted 10 shows for Larry Bensky’s radio program on KPFA. Recently I taught a course on Government and Elections at the California Institute of Integral Studies.

I lecture often. I’ve spoken at Mills College, UC Davis Law School, De Anza College. I spoke at the founding of the Roosevelt Institute at UC Berkeley, and at the annual Fighting Bob Fest in Wisconsin. I gave a commencement address at San Jose’s Police Studies School, what is now called the Justice Studies Department. And recently I spoke at a celebration of Cinco de Mayo hosted by the San Francisco Chapter of the Labor Council for Latin-American Advancement.

I don’t know, those are a few things. So yeah, I’ve been very busy.

Q: How about your law firm? Can you mention some of the work you have done there?

A: Well, along with my partners Whitney Leigh, Bryan Vereschagin and Enrique Pearce, we’ve worked on a number of good lawsuits. We’ve brought or assisted in lawsuits to enforce the local minimum wage ordinance, against the housing authority, against Clear Channel, and against the Grand Jury of Yolo County for not having sufficient Latino representation. It’s a diverse practice and we’re still settling in.

We don’t work for people we don’t believe in.

Q: Matt, thank you for your time. I think readers will appreciate hearing directly from you on these important matters.

A: Of course David, thank you for your interest.