Marriage Decision Sets Huge Precedent, But Struggle Far From Over 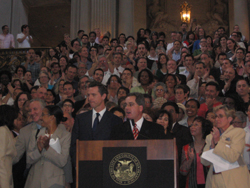 Yesterday’s decision by the California Supreme Court was historic because it set a huge precedent. Not because the Court found the ban on same-sex marriage similar to earlier bans on interracial marriage, nor because it said domestic partnerships are inherently unequal. What really mattered is that the Court ruled sexual orientation a “suspect class,” which means that all laws that discriminate on that basis must now pass strict scrutiny – a crucial step forward in the rights of LGBT people.

But same-sex couples in California still lack the federal benefits of marriage that straight people take for granted – like Social Security and immigration – because the Defense of Marriage Act (DOMA) precludes them from doing so. Marriage equality supporters must defeat a constitutional amendment in November that would take away the right to marry, but they also need a President Barack Obama – who has promised to repeal DOMA. If DOMA gets repealed in 2009, gay couples in California will finally be equal in the eyes of the law.

After the Supreme Court heard oral arguments in March on whether the state’s marriage law is unconstitutional, most legal observers predicted that the Court would uphold the ban on same-sex marriage. If California’s Domestic Partnership Law offers many of the same legal rights as marriage, how are same-sex couples harmed by not getting married?

The Court answered this question by ruling that the term “marriage” is a necessary part of that constitutional right. By framing the right to marry within the right to have a family, families of same-sex couples must be accorded the same “dignity, respect and stature” as other families enjoy. Offering the “historic and highly respected designation of marriage” only to straight couples – while giving gay couples “the new and unfamiliar designation of domestic partnerships” presents a “serious risk” of denying them such stature.

It’s what gay marriage supporters have argued for years, and is similar to the “separate is unequal” argument made by the Massachusetts Supreme Court in 2004. But while that was a victory for California, it wasn’t the best part of yesterday’s ruling.

California’s law defining marriage as being between “a man and a woman” discriminates against gay couples – but to strike it down a court would have to rule that it violates equal protection. If a law discriminates against a “suspect class” – like race, gender, religion or national origin – it must pass “strict scrutiny.” In other words, the law is presumed to violate equal protection – unless the state can prove that it serves a compelling public interest, and is narrowly tailored through the least restrictive means toward that end.

But the courts have not recognized sexual orientation as a suspect class – so laws that discriminate against gays and lesbians have been upheld on “rational basis” grounds. That means a law does not violate equal protection as long as the court can find some intelligible argument for why it makes sense. New York, for example, upheld its ban on gay marriage through the “rational basis” test – its high court said the state had a greater interest in marrying straight people because they might accidentally have kids.

For decades, LGBT advocates have gone to Court and argued that laws discriminating against them are “gender discrimination.” Hawaii’s landmark decision in the mid-1990’s on gay marriage was argued on this basis, and S.F. Superior Court judge Richard Kramer originally ruled in the present case in favor of marriage equality on the basis that it was sex discrimination. The reason for taking this route was strategic: the courts have long considered “gender” to be a suspect class – but not “sexual orientation.”

Yesterday’s decision was historic because it ruled “sexual orientation” a suspect class. I predicted this might happen when I read the Appellate Court decision in October 2006, where the lower court actually laid out what are the “necessary” elements of a suspect class: (a) the group has historically been oppressed, (b) the trait does not relate to a person’s value to society, and (c) the trait is immutable – i.e., cannot be changed.

Back then, the Appellate Court agreed that sexual orientation fit the first two categories – but said that they lacked evidence to conclude the third point. At the time, I urged gay marriage advocates in Beyond Chron to give the Supreme Court ample factual evidence that sexual orientation is an “immutable trait” – and that if successful, the Court would have no choice but to strike the ban on same-sex marriage.

But the Supreme Court ruled that it didn’t matter if sexual orientation is “immutable” – because that’s not a necessary element of a suspect class. “A person’s religion,” said the Court, “is a suspect class for equal protection purposes – and one’s religion is a matter over which an individual can control.” The Court added that one can cease to be an alien (which is also considered a “suspect class”) by applying for U.S. citizenship.

San Franciscans were in a festive mood yesterday – after having waited 4 years for this outcome – but the immediate legal effect on gay couples is rather minimal. That’s because California Domestic Partnerships already gave same-sex couples most of the legal rights of marriage. Moreover, California’s Supreme Court could only require that the state let gay people marry – without extending any marriage rights under federal law.

And the Defense of Marriage Act (DOMA), which President Bill Clinton signed in 1996, explicitly says that same-sex couples cannot enjoy any federal rights – such as Social Security benefits, immigration laws that allow you to sponsor a foreign spouse, and the right to file a joint federal tax return. Even Massachusetts, where gay couples have had the right to marry since 2004, does not have complete marriage equality for this reason.

But a President Barack Obama – along with bigger Democratic majorities in both houses of Congress – could change this after the November elections. Obama has pledged to fully repeal DOMA, whereas Republican John McCain would not. There will certainly be a fight in Congress, so marriage equality advocates must focus on the various House and Senate races in November – to ensure that a Democratic Congress will make it possible.

Meanwhile, the extreme right in California will put a constitutional amendment on the November ballot to prohibit marriage equality. Because yesterday’s Court ruling was based on the California Constitution – not the U.S. Constitution – passage by the voters could effectively repeal the Supreme Court’s decision. Therefore, much is at stake this November – and marriage equality supporters must mobilize now to defeat the initiative.

Yesterday’s court ruling was historic – and has created an exciting new precedent for gays and lesbians in California. But we now run the risk of losing in November at the ballot box – and we still need to repeal DOMA at the federal level to get full marriage equality. Defeating the initiative and repealing DOMA are both doable goals.