“Many Brain-Damaged Football Players Would Do It All Over Again.” And Your Point Is … ? 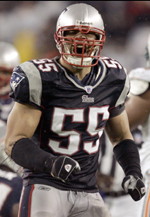 Ed. Note: This article was written before the news yesterday that Junior Seau, 43, a very recently retired all-pro linebacker, was dead of a gunshot wound to the chest, in what appears to be yet another football suicide.

I recently served on a post-performance “talk back” panel following a preview of the new play Headstrong at the Ensemble Studio Theatre in New York. As Arthur Miller did for military profiteers in the 1940s with All My Sons, so has playwright Patrick Link done for the newly risen issue of systematic traumatic brain injury in football.

Authentic in its depiction of the sport, painful in its family dramatic elements, yet ultimately non-judgmental, Headstrong takes the “What-Price-Glory?” school of athletic machismo about as far as it can go. A retired mid-level National Football League star, played with ferocious intelligence by Ron Canada, deals with and denies the forces behind not only his own too-soon and too-steep mental decline, but also the drift, divorce, and suicide of the football player who had married his daughter and fathered his grandson.

Headstrong raises a point also made in the discussion of what is now the nearly 60 lawsuits against the NFL on behalf of more than 1,000 retired players claiming that they were not adequately advised of the known scientific information on the long-term mental health hazards of their profession. Like Canada’s character in the play, many (most? almost all?) of even the most embittered ex-stars still say they’d do it all over again. The sense of sporting accomplishment, the rush of adrenaline and testosterone, the roar of the crowd, the drive to push past the limits of their brains, along with the rest of their bodies – all made the totality of the experience in some way existentially “worth it.”

As these cases proceed, you can be sure the NFL’s army of the best-paid defense lawyers money can buy will be licking their chops over the prospect of cross-examining any and all expressions of fealty to the football gods. Even the backhanded ones.

There is the occasional exception, such as Lem Barney, the great cornerback for the Detroit Lions. Now 66, Barney says, “If I look at the game now and I look back on it retrospectively, if I had another choice I’d never played the game, at all, in my life. Never. Never. From all-city, all-state, all-conference, all-American, seven times All-Pro, I’m in eight Hall of Fames, it wouldn’t be. It would be golf or tennis. I’m serious. Very serious.”

Of course, by lining his personal accolades up against his denunciation of the sport in which he earned them, Barney also, perhaps unconsciously, makes the case that vanity dies hard. The reformed womanizer has the same problem when he preaches monogamy.

But to take the football debate where it belongs – to the realm of public health – a better response to Barney, to Harry Carson (another regretful Hall of Famer, who played linebacker for the New York Giants’ first Super Bowl teams), and to everyone else on the other side of the argument is really: So what? Big-time jocks and celebrities come and they go. They get rich or famous, or they die trying. But where is it written that such a value system properly informs youth sports, too?

In this most agonizing football offseason ever, I’m still waiting for all of us to tackle the heart of the matter: that a parent who lets his kid play tackle football before his brain has developed is as big a fool as someone who pushes him into boxing.

We’re certainly not getting that level of candor from Dr. Robert Cantu, whose Center for the Study of Chronic Traumatic Encephelopathy at Boston University two years ago accepted a $1 million NFL grant – with “zero strings,” the New York Times cheerfully assured us.

As evidence of the absence of entangling fibers, Cantu went on to promote the cottage industries of space-age helmet technology to measure impacts, and of feel-good “concussion management” measures – all backstopped by state laws which push on our public high school systems tail-chasing, impossible-to-execute “preventive” measures, without taxing a dime from the $10-billion-a-year NFL.

In the newest twist of Cantu’s free legal and public relations counsel to the pros, he ruminates that the NFL soon might have to refuse to sign college stars with concussion histories.

As a doctor, Cantu makes a hell of a good lawyer.

Irvin Muchnick blogs at http://concussioninc.net. His most recent ebook is “PENN STATE IN THE POOL: The Cover-Up of the USA Swimming Youth Coach Sex Abuse Scandal,” which is available on Amazon Kindle at http://amzn.to/JoS53m, or as a plain PDF file by sending $1.49 via PayPal to paypal@muchnick.net.