Making Meet Ups Matter: What Activists Can Learn From “Art of Gathering”? 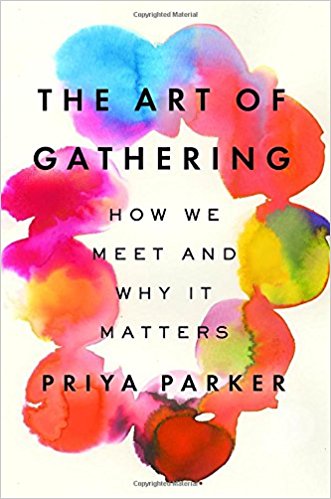 Have you ever been to an awful panel discussion? An awkward funeral? A long and frustrating meeting? A flash mob that fizzled? A dinner party with unfriendly people?

According to Priya Parker, a meeting facilitator and expert on social interaction, the fault wasn’t yours. Instead, responsibility for your bad experience lies with the event planners who were clueless about “the art of gathering,” the subject of her new book explaining “how we meet and why it matters.” (Penguin Random House, 2018).

When I first spotted Parker’s work on display in a Berkeley bookstore, I was initially put off by its “pop sociology” packaging and self-promotional jacket copy. From the latter, we learn that Parker founded Thrive Labs, a “strategy and visioning firm” which “helps activists, elected officials, corporate executives, educators, and philanthropists create transformative gatherings.”

Oh yes, I thought, just what we need–another high-priced consultant advising rich funders and captains of industry on how to make their board meetings, strategic planning sessions, and corporate retreats more “transformative” for the world.

In this vein, The Art of Gathering does not entirely disappoint. Among the forms of social networking the author applauds are the Renaissance Weekends, made famous long ago by the captivating presence of Bill and Hillary Clinton at an exclusive South Carolina beach resort every New Year’s Eve weekend. According to Parker, its well-heeled hosts have turned what began as a holiday “house party” into a creative exercise in “tribe-making” among the hundreds of establishment-types now invited to attend.

Yet, Parker’s own professional experience also includes facilitating “racial dialogue groups” on campus, as an undergraduate, and later working “with Indian villagers who were grappling with how to rebuild their communities after ethnic riots and with Zimbabwean activists fighting the threat of a government shutdown of their NGOs.”

So her book actually merits some attention from labor, community, and political activists concerned that our own gatherings are too often uninspired due to poor facilitation or limited audience participation. As good organizers know, devising better ways for members of a group to meet, interact and accomplish more together is a key part of their job.

According to Parker, gatherings–whether large or small—tend to remain “lack luster” and “unproductive” if the people in charge don’t shed “old or faulty assumptions” about their form and content. “A talented gatherer doesn’t hope for disparate people to become a group. She makes them a group.” The author offers suggestions for dealing, more effectively, with groups of all sizes (from six and under all the way up to 150 and then “a sea of humanity-think Bonnaroo, Tahrir Sqaure, the Million Man March, the Hajj in Mecca…”)

Most observers were wowed by the scale and enthusiasm of the rock-concert size crowds attracted by Senator Bernie Sanders, during his 2015-16 presidential primary campaign.  Parker was less impressed by a massive Sanders rally in Philadelphia where, “for security reasons, many people sat in a 10,200 seat arena for close to three hours before the candidate ever appeared.”

According to the author, the event planners “had the complete attention of thousands of people but, because that time period was mentally scheduled under ‘waiting,’ they didn’t make use” of what could have been “an incredible gathering opportunity.”

“Imagine what could have been done with that time. They could have had some volunteers work as facilitators to get people to sit in groups, or turn to a stranger, and talk about why they were there, what they believed the country most needed, and why they believed Sanders was the answer. They could have set up story circles where clusters of eight sat and shared their own experiences of being on the wrong end of America’s economic divide. They could have used that time to create a movement.”

Of course, actual movement building requires a bit more than just making giant rallies more participatory, through one-on-one networking among participants. And, in their Rules for Revolutionaries: How Big Organizing Can Change Everything, Sanders campaign organizers Becky Bond and Zack Exley do provide numerous examples of better meeting organization, from the stage of the Sanders campaign when they and others personally recruited thousands of volunteers for phone banking and door knocking, at smaller-scale gatherings without the candidate as a draw.

Conferences of all kinds are also found wanting because, in a fashion similar to many political or labor rallies, “they tend to be full of vertical connections between the stage and the crowd,” but short on horizontal linkages between the two. Plus, as Parker observes,

“nowhere is puffed-up phoniness more palpable than at conferences. Nowhere else is the chance to have conversations across borders, identities, and professions so often wasted…Virtually every conference or industry gathering I have attended featured panels, and virtually every panel is dull. The people who pick the panel topics pick the blandest ideas they can find—something about collaboration or partnership, prosperity or building bridges, new horizons or growth.”

To avoid such hackneyed framing, Parker offers her own list of “15 ways to make a conference—or any kind of gathering—suck less.” One key to making gatherings more interactive and  “horizontally-oriented,” she argues, is employing speakers or facilitators who can turn “a one-to-many speech into a collective experience,”

To do this, Parker urges those on the platform to give what she calls a “’sprout speech’ as distinguished from its tedious better-known cousin, the ‘stump speech.’” The latter is, of course, “the pre-planned, baked spiel that people have given a thousands times.” The sprout speech is more spontaneous, more responsive to those in a particular audience, and, by intention, less filled with pat formulations and exhortations. According to the author, “it is people’s ‘sprouts’ that are most interesting—and most prone to making a group feel closely connected to attempt big things together.”

In a similar vein, the strength of Park’s book lies in its “fresh eyes”—a willingness to question norms of gathering long taken for granted, even if from, an organizing standpoint, far more could be accomplished by employing new forms of meeting or conference facilitation, rally formatting, and small group interaction. Even experienced “gatherers”—long engaged in building a sense of community through their work—will find her observations and suggestions useful.

(Steve Early is a longtime journalist and union activist, whose day job for many years involved organizing labor-related gatherings of all kinds. He is the author, most recently, of Refinery Town: Big Oil, Big Money, and the Remaking of An American City, published by Beacon Press.)