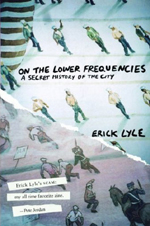 During the late 1990’s, a zine in the form of a newsletter emerged in San Francisco’s Central City with the unusual name, Turd-Filled Donut. This title belied what was often an insightful and provocative look at the city’s politics. I never knew the people behind the publication, but its co-creator, Erick Lyle, has now put out a book that includes both stories from that publication as well as other materials he wrote from 1997-2005. At its heart, On the Lower Frequencies is the story of how some twenty-somethings sought to survive in San Francisco through their art, music, and political engagement at a time when most of their brethren were arriving in the city for high-paying jobs in the booming tech industry or in corporate offices downtown. Lyle raises some important questions about the prospects for an ongoing counterculture in steadily gentrifying cities like San Francisco, and also about the effectiveness of non-traditional strategies for impacting urban politics.

For those familiar with San Francisco through the years Lyle chronicles, his book is a reminder of how the city has in some ways changed dramatically and in other ways stayed the same.

The biggest change may be that dramatically escalating housing prices and rising evictions no longer arrive as a sudden and unexpected shock—which was the case when the dot-com boom followed nearly a decade of moderate price rises—but is now seen as one of the hazards of trying to live in San Francisco. Lyle does a good job conveying the sense among part-time or unemployed artists and cultural workers in the late 1990’s that their future status in the city was at stake—a battle for survival that continues to this day.

He and his friends had a goal of transforming an abandoned building into a center for art, music and culture. Since these folks had no money, this would be accomplished by squatting and hoping the authorities would look the other way. Lyle and his allies found a site at 949 Market Street, and eventually put on an incredible music and spoken word show attended by 600 people.

This show represents the apotheosis of Lyle’s vision for an alternative San Francisco. But as he himself is aware, putting on music shows in vacant buildings does nothing to address rising rents, hunger, displacement, homelessness, or any of the social and economic justice problems that concern Lyle.

This is not to downplay the importance of counter-cultural activity in an era of corporate homogenization. Rather, Lyle forces readers to question the broader purpose, and social and political impacts, of cultural activities undertaken by primarily young employable white people choosing to live on welfare in one of the nation’s most expensive cities.

In some respects, Lyle’s work is reminiscent of Lisa Gray-Garcia’s Criminal of Poverty in that readers lacking personal familiarity with the people and issues described in the text may reach a contrary conclusion to the author’s intent. In Gray-Garcia’s case, her remarkable overcoming of obstacles could lead some to question her broader theme regarding the lack of social mobility among the poor; here, the fact that Lyle and his compatriots have figured out how to remain, and even thrive, in San Francisco despite escalating gentrification could lead some to question the dire predictions regarding future prospects for the city’s low-income bohemians.

Lyle has enough self-knowledge to expose these possible contradictions, and his book reflects a nuanced political understanding. This becomes clear with Lyle’s thought-provoking interviews with people like Willie Brown and Matt Gonzalez; his summer 2004 interview with the latter offers some particularly cogent points about San Francisco.

For those seeking to relive the spirit of resistance that arose in San Francisco in the late 1990’s, reading On the Lower Frequencies will provide a lot of fun. And for those who were not in San Francisco during those years, Lyle provides an inspiring account of some of what you missed.