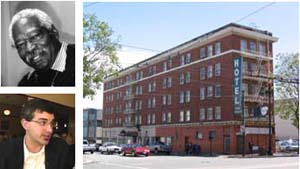 The San Francisco Board of Supervisors is expected to approve legislation today that requires owners of residential hotels (SRO’s) to install individual mailboxes for permanent tenants. Passage of this measure represents San Francisco’s latest effort to upgrade a housing stock that other American cities either demolished, converted, or denigrated as “flophouses.” Considering that San Francisco’s political leadership in the 1960’s and 70’s did not think twice before the Redevelopment Agency demolished thousands of SRO units in the South of Market, the turnaround has been remarkable. Once the city figures out a way to finance the rewiring of hotel rooms so that tenants can legally cook, SRO’s will come closer to the living standards of apartments than was dreamed when most of these often beautiful structures were built 70-90 years ago.

For those who have fought to preserve San Francisco’s single-room occupancy hotels, the achievements of the past five years are remarkable. SRO tenants now have a formal legal right to have overnight visitors, sprinklers have been installed in individual rooms, over 25 buildings have been restored to their historic splendor through the city’s master lease program, and the California Supreme Court upheld San Francisco’s Residential Hotel Anti-Conversion Ordinance.

And thanks to Assembly member Mark Leno, SRO’s are the only type of housing exempt from the state Ellis Act.

Moreover, a housing stock which as late as the mid-1990’s housed as many transients as longterm residents now likely has a higher permanent residency level than at any time in San Francisco’s history. The days when hotels were primarily comprised of merchant seamen and long-haul truck drivers will never return, but the number of working SRO tenants is at its highest level in decades.

Some of the hotels that sued San Francisco because they were denied the right to convert to tourist use are now nonprofit-run and house formerly homeless persons. This includes the Pacific Bay Inn and the Empress Hotel. Meanwhile, the Allison Hotel at 417 Stockton, which paid to convert to tourist after losing its legal fight with the city, has been boarded up by its owners. The Allison’s fate, along with that of the once heavily-litigious Abigail Hotel at 246 McAllister Street, shows that it is more profitable operating as residential than depending on the ups and mostly downs of the Class B and C tourist trade.

In most American cities, SRO’s are viewed as “blight,” and are often the targets of urban renewal schemes. New York City tried to protect its SRO stock after a wave of demolitions during the gentrification frenzy of the 1980’s, but in 1989 the state’s highest court invalidated the city’s SRO protection law. Chicago still has no law to protect SRO’s from either demolition or condo-conversion, and Los Angeles has been talking about passing a law for years without winning a permanent measure.

First, San Francisco’s SRO’s are located in multiple neighborhoods so that Chinatown, the Mission, Tenderloin, and South of Market were able to form a stronger political alliance than would emerge when SRO’s are concentrated in a single area, like Los Angeles’ Skid Row. Chinatown’s involvement was particularly influential in the 1980’s, when its SRO advocates had better relations with City Hall than other activists.

Second, San Francisco’s SRO’s became identified with the citywide push for historic preservation. Momentum for this came from Leroy Looper’s remarkable transformation in the 1970’s of the Tenderloin’s historic Cadillac Hotel, and from Brad Paul leaving the National Trust for Historic Preservation and coming to work in the Tenderloin in 1982. Paul’s walking tours of the neighborhood exposed key city leaders to the historic character of SRO’s, and helped build downtown support for SRO preservation.

Some Indian owners neglected their properties, and until 1995 (when the Building Inspection Commission emerged) were allowed by San Francisco city officials to violate the housing code with impunity. But the fact remains that non-Indian owners were far more likely to avoid renting to the poor, and much less likely to convert to tourist use. If not for this ownership mix, thousands of additional residential SRO units would likely have been lost in the boom years of the 1980’s.

Nor is it a coincidence that the city’s Master Leasing Program, upon which Care Not Cash is based, has overwhelmingly involved Indian hotel owners. These owners are not interested in quick profits from speculation, or in fostering gentrification. Rather, they want to hold on to properties for their family’s longterm interest, which results in agreeing to nonprofit leasing contracts that do not maximize potential profits.

The fourth reason for SRO’s success in San Francisco is that District 6 Supervisor Chris Daly’s primary work history was in SRO’s, and he sees the needs of SRO tenants as his top priority. Since taking office Daly has sponsored all of the key legislation improving SRO living conditions, and is viewed by the historically disenfranchised SRO population as “their” Supervisor. The Board of Supervisors has often had members strongly supportive of SRO tenants, but Daly has given SRO’s a spokesperson—which itself is part of the remarkable transformation of San Francisco’s SRO’s over the past 25 years.

Finally, SRO’s have been able to thrive in San Francisco due to strong citywide tenant consciousness that manifested itself in longstanding rent, eviction, and zoning control protections for SRO tenants. The wholesale emptying of SRO hotels that still occurs in other cities, including Richmond across the Bay, cannot happen here.
With so much accomplished, there may be only one final frontier for San Francisco’s SRO’s: the ability of tenants to legally cook in rooms. This could be accomplished through a hotel rewiring program for less than $1000 per room. A few years ago SRO tenants won funding for a rewiring program for 6th Street hotels over the objection of Redevelopment Agency staff, who then proceeded to do everything in their power to prevent the program’s implementation.

As the number of working tenants increase, cooking in rooms becomes a greater priority. If the Board of Supervisors could extract funds from the Agency it set aside for this purpose, and transfer the money to a more responsive entity like the Department of Human Services, this long sought rewiring program could get started.