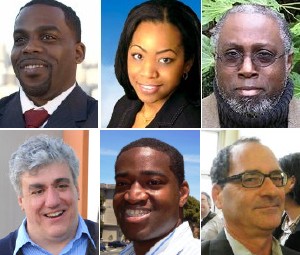 The Supervisor’s race in San Francisco’s District 10 remains up for grabs. Onetime frontrunner Lynette Sweet has dropped from the pack since it was disclosed she had outstanding tax bills. DeWitt Lacy, far off the political radar screen only one month ago, has rocketed upwards after winning the top endorsement of the San Francisco Democratic County Central Committee (DCCC); Lacy has since been endorsed by Tom Ammiano, Leland Yee and other politicians. Eric Smith is the top choice of key green groups like the Sierra Club in a district where environmental issues are a top priority. Tony Kelly is the first choice of the San Francisco Tenants Union, while Steve Moss is the favorite of the carpenters’ and laborers’ unions. Malia Cohen got labor’s top backing, and continues her fundraising success. College Board member Chris Jackson has previously won a citywide race, and remains viable despite losing some projected support to Lacy. San Francisco has not seen a Supervisors race like this since the Jaynry Mak-Ron Dudum-Doug Chan-Ed Jew District 4 race in 2006, a contest decided, as this likely will be, by ranked choice voting.

San Francisco’s District 10, which includes Potrero Hill and Bayview-Hunters Point, is the city’s most heavily African-American district. Most believe that it is the only district with a chance of maintaining black representation on the Board of Supervisors in 2011, and the opening has encouraged many qualified candidates.

District 10 is the only supervisors’ race lacking either a political “insider” or “machine” candidate who secures key endorsements and otherwise preempts the field. This has led to an unprecedented dispersion of endorsements, with no candidate monopolizing support even among groups usually ideologically aligned.

For example, the DCCC endorsed Lacy, Cohen and Smith. Yet the San Francisco Labor Council, which is often aligned with the DCCC, endorsed Cohen and Jackson, and the carpenters and laborers’ unions are joining with the controversial SEIU-UHW in backing Moss.

Lacy has compiled the most impressive endorsement list, with Aaron Peskin, Tom Ammiano, Leland Yee, John Avalos and David Campos now on board (Campos also joined Ross Mirkarimi in endorsing Smith). But progressive politicians are unlikely to back their endorsements with much financial support, since there is a growing consensus that progressive money is better spent on behalf of Rafael Mandelman in District 8.

Targeting resources to Mandelman appears a wise move. Scott Weiner, initially seen as too conservative for District 8, is doing much better than expected. Moderate Rebecca Prozan is also doing well, finding success by framing herself as the centrist between her two male competitors.

While activist Gabriel Haaland states in the current Bay Guardian that “the polls are very consistent, most of the voters in D-8 would prefer a progressive over a moderate, and when they know who the progressive is, they support that candidate,” the electoral history of the district says otherwise. No candidate endorsed by the Harvey Milk Club has won the District 8 supervisors race since district elections resumed in 2000, and moderate incumbent Bevan Dufty would easily win re-election if not barred by term limits.

Mandelman is positioned to win the seat for progressives, which explains why the DCCC and its allies are likely to focus on D8 rather than D10. While progressives would be happy in District 10 with the election of Lacy, Smith, Kelly, or Jackson, and would be satisfied with either Debra Walker or Jane Kim in District 6, the stakes are far higher in District 8, where Mandelman is the sole progressive.

Sophie Maxwell won re-election with 7,916 votes in 2006 in a small field where she faced no well-funded opponent. In light of the large field in the current District 10 race, the winner could get as few as 3,000 first place votes. Securing these votes means going after constituency sub-groups, with the campaign that most effectively targets its base prevailing.

To help in this targeting, DeWitt Lacy has brought in former Art Agnos Chief of Staff Claude Everhart, a seasoned pro who I have known since 1986. Everhart knows the district as well as anyone, having worked in Bayview-Hunters Point for years.

Smith’s chance for victory depends on his cornering the environmentalist vote, and he is investing heavily in a field operation to accomplish this. Smith also hopes that his independence from political insiders will strike a chord in a district where many voters are tired of policymaking via backroom deal.(Disclosure: Smith was the original webmaster for Beyond Chron and continues to write a weekly jazz column)

Chris Jackson is using the highly skilled Left Coast Communications, and may have greater name recognition district-wide than his competitors due to his having already won a citywide race. Tony Kelly and Steve Moss are likely the best-known candidates in Potrero Hill, and many believe that SEIU-UHW and building trades unions will direct hundreds of thousands of dollars to back Moss in the hopes of shifting the seat away from the current Board’s progressive majority.

Malia Cohen is the only District 10 candidate endorsed by both the SF Democratic Party and the SF Labor Council. She also gets a boost with the district’s many Asian-American voters through her endorsement by Assemblymember Fiona Ma.

With so many strong candidates, voters’ second and third choices will decide the race. Recall that Ron Dudum initially got the most first place votes in the 2006 D4 race, and that most pundits saw him competing with Jaynry Mak and Doug Chan for the seat.

A seat that Ed Jew, who had fewer endorsements and less money, won.

Jew won because the war between the other candidates left Jew as a popular second or third choice. District 10 candidates should be on their best behavior in dealing with their adversaries, as the second and third choices will decide this election as well.

Political insiders agree that they have never seen such a topsy-turvy race as the current District 10 contest. And with five weeks to go, much could still change.