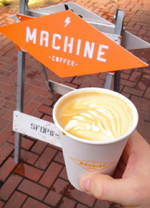 Mayor Lee announced the opening of the “Machine Shop and Deli” on August 9, which adds to the many new innovative businesses on Mid-Market. Owned by Chefs Gayle Pirie and John Clark, who also own the adjacent Show Dogs as well as the Mission District’s Foreign Cinema restaurant, Machine Coffee & Deli (1024 Market) serves Four Barrel Coffee and custom-made sandwiches with house-cured meats. Clark noted at the opening that he had tried to live in Mid-Market when he arrived in San Francisco thirty years ago, and always wanted to have a presence in the area. Both he and another partner, Bruce McDonald, acknowledged that the area is not the easiest place to do business, but that in the past eighteen months their confidence in Mid-Market’s revival has increased.

Mayor Lee’s penchant for holding opening events at food establishments (Pearl’s at 6th and Market, Original Joe’s in North Beach, Brenda’s on lower Polk) took him to Mid-Market on August 9 to announce yet another breakthrough in the street’s revival. While the mayor did not partake of the coffee and sandwiches distributed to the crowd, he expressed delight at the increased investment in Mid-Market by three of the city’s culinary leaders.

Machine Coffee & Deli pays tribute to machine shops, metal workers, and hand forged and cast metal parts reliant on hand to eye precision and calculations – a passion for Owner John Clark. The original 1930’s light switchboard from the neighboring Warfield Theatre controls the lighting for the deli, and the walls feature recycled wood from the Warfield’s basement sound room.

As always, the Mayor was also happy about the fifteen jobs the new business has created. And both Clark and McDonald made it clear in their comments that they would not have opened the new business without city small business loan assistance, and the great help they got from the mayor’s office of economic and workforce development.

The new cafe is only a block from the new pop-up spaces at the Renoir Hotel, and is the only coffee spot on Market for many blocks heading toward Fifth Street. It is a few doors down from the long vacant Hollywood Billiards site, and the Mayor expressed optimism that a new future for that dormant space would soon be announced.

Pirie, Clark and McDonald are exactly the type of cutting-edge small business pioneers that Market Street needs. Their latest investment will send a positive message to others, further encouraging the street’s success.