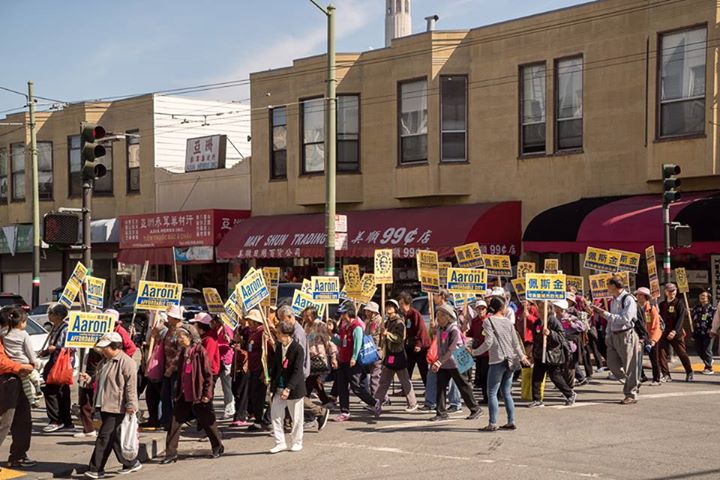 Chinatown tenants will turn out for Aaron Peskin

For many San Francisco activists, the November 3 election represents a defining moment for the city’s future. Yet despite all the mailings, billboards, and apocalyptic rhetoric, many San Francisco voters will not cast ballots. Early projections of a low turnout election are proving correct, and history says that this is not good news for progressives.

The good news for progressives is that Aaron Peskin’s campaign in D3 is likely immune from being hurt by low turnout. In fact, the lower turnout could well help propel Peskin to victory.

I say this for two reasons. First, his voters are far more motivated than supporters of Julie Christensen. For many, electing Peskin has become a personal and political crusade.

Second, in my analysis of the November 2013 defeat of 8 Washington, I noted that the election had a meager 28% voter turnout and that it saw the highest vote come from long gentrified Telegraph Hill. Those 8 Washington opponents will be voting for Peskin this November, and will have another high turnout rate.

Chinatown voting will also be high. With the Community Tenants Association of Chinatown and many neighborhood activists strongly backing Peskin, he is going to win this community

Peskin was elected in 2000 with no Chinatown support (most backed Lawrence Wong) and with no support from the business and real estate interests now backing Christensen. The blizzard of negative ads targeting Peskin by Christensen-backed independent expenditure campaigns—correctly deemed ineffective by SF Chronicle columnist Willie Brown— will not stop his supporters from casting ballots; nor will these negative ads boost voter turnout for Christensen.

An October 8 SF Chronicle story has Christensen blaming Supervisor Campos for tenant displacement in the Mission. She also accuses Supervisor Kim of making up “horror stories” about landlords evicting tenants. These anti-tenant comments in heavily tenant D3 have the sound of desperation, and will not help Christensen’s cause.

The low voter turnout has some believing that Prop A is at risk. I’ve been assuming based on polling numbers, the lack of a visible No on A campaign (the SF Apartment Association opposes the measure but has yet to spend heavily to defeat it), and citywide concern over housing affordability that Prop A was headed for victory (it needs a 2/3 vote).

But a voter turnout of disproportionately older homeowners is not good for Prop A. Nor is the fact that the young renters most impacted by skyrocketing rents are among those least likely to vote.

Adding to concern over Prop A is that SEIU Local 1021 took no position, claiming that this was due to “the negative impacts on contracting out of work.” SEIU is referring to changes at the Housing Authority, but the union’s outspoken concern with housing affordability makes its non-endorsement of Prop A shortsighted. I have no idea how many pro-labor voters will not vote yes on Prop A because of 1021’s position, but in a low turnout election even hundreds of lost votes can make a difference.

There is not much grassroots energy around Prop A, with most progressives focused on Peskin and Props F and I. Unfortunately, as the No campaigns against both initiatives point to Prop A as a positive alternative, some progressives have taken to downplaying the bond’s importance (arguing, for example, that Airbnb takes more rental units off the market than will be built under Prop A. This point about short-term rentals can be made without negatively referencing the bond).

It would be a tragedy if a desperately needed affordable housing bond went down due to the crossfire between other measures on the ballot, and because the sheer volume of No on F and I materials leads undecided voters to also vote No on A.

If you have not been involved because you were certain Prop A would win without your help, I suggest getting to work.

Props F and I

Prop F (short-term rental restrictions) and Prop I (the Mission Moratorium and Plan) would seem to be most negatively impacted by the projected low voter turnout. Victory for either was always an uphill fight, and responding to multi-million dollar opposition campaigns requires a powerful grassroots effort.

That’s why I was stunned to see that an estimated 250 progressive activists at a Vision SF meeting last Saturday afternoon at the Brava Theater in the Mission. It’s a month before an election that progressives claim will “define” the city’s future and 250 people are talking to each other in the Mission instead of persuading undecided voters in the Richmond, Castro, Excelsior and other swing neighborhoods to vote Yes on F and I.

This meeting took activists away from voter contacts on the weekend directly preceding the start of absentee balloting, which  began this week. No weekend until the one before election day may be more crucial for reaching voters, as many are casting ballots this week. After all the post-mordems following Chiu’s victory over Campos about the need for progressives to improve their absentee voting strategy, not being out on the streets in force last Saturday is inexplicable.

It was likely a lot more fun cheering speakers at the Brava Theater than getting the brush off from uninterested voters around Clement Street. Door to door and/or sidewalk persuasion can be lonely, frustrating, and exhausting. But you don’t defeat well-funded opposition campaigns by shifting resources from reaching undecided voters to talking to the converted. And this is particularly true in an election where Prop F and I backers don’t simply have to get people to agree with them, but also have to motivate those in agreement to vote.

Vision SF could have held this event in late spring, using it as a springboard for activism around the Prop F and I campaigns. Or it could have been held in mid-November, after the dust has settled and the 2016 political terrain is clear.

Or it could have been held Saturday night, instead of during the afternoon. That would have avoided interfering with voter outreach during the day. The Saturday night event could have given prizes to those handing out the most literature and/or talking to the most voters that day; that would have created an incentive to get people to contact voters rather than creating a competing and more fun activity at the Brava Theater.

I understand that some of those attending Vision SF might not have otherwise been doing the out of the limelight grunt work contacting voters that Saturday afternoon.  But the answer to their non-involvement is not scheduling an alternative event, but rather to convince them that a fight for the “soul” of the city requires all hands on deck—which means talking to the voters you need to win.

In a low turnout election against well-funded opponents, those serious about winning don’t have the luxury of giving up campaign work on a Saturday afternoon in October. It certainly does not convey a sense of  urgency surrounding progressive claims that this election is a “defining” moment.

I know this sounds hard core, but that’s what it takes to beat big moneyed interests.  If you really believe that victories for Prop F and I are vital to the city’s future, then all focus must be on winning the election.